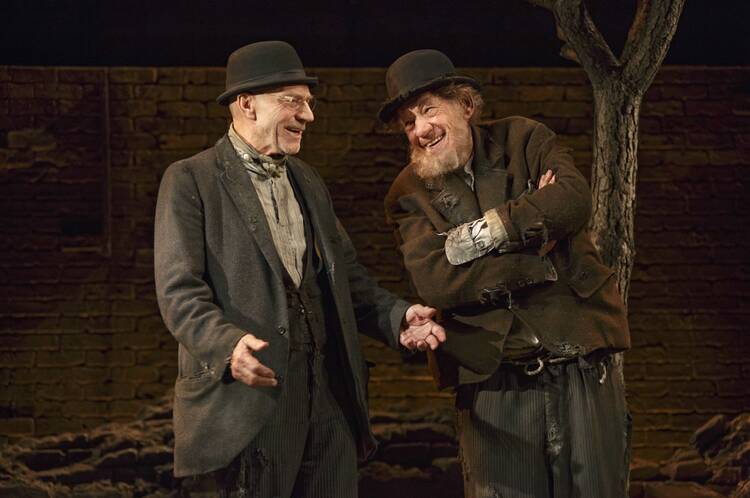 It has four main characters, little set to speak of and even less in the way of stage action: “Nothing happens, twice,” as one critic wrote of an early production, is not an unjust plot summary. So how does Samuel Beckett’s bleak 1953 tragicomedy Waiting for Godot manage to seem so capacious, so rich, so—occasionally, at least—rip-roaringly fun? It helps to have two expert, crowd-pleasing performers in the lead roles of tramps Vladimir and Estragon, as Broadway currently does with Ian McKellen and Patrick Stewart, who are performing it in rotating repertory with Harold Pinter’s similarly sere, gnomic head-scratcher, No Man’s Land (1975).

As good as these starry knights are, though, the play’s enduring allure is not about celebrity. Indeed, I happened to realize on my way to the theater that this would be my fifth “Godot,” and I’ve never seen a bad one, stars or no. Perhaps because the play is a kind of literary monument, a required-reading-list staple, it had never occurred to me to claim it as a personal favorite. What the splendid new Broadway “Godot” affirms, among other salutary things, is that I’ve come to know and love this thorny old masterpiece as dearly as any of the last century’s defining works, from “The Rite of Spring” to “The Godfather Part II.”

So what is it about Beckett’s weird, apocalyptic clown show that gives it such remarkable resonance, soulfulness—even, dare I say, flat-out entertainment value? Like every great work, it has surface pleasures as well as subterranean depths, but these are seldom as inextricably bound together as in “Godot.” The play’s linguistic japery, desperate slapstick and circadian ebb-and-flow supply a music of their own, but these are not diversions or feints mapped over the thrust of a larger drama. Instead, in the two hoboes’ pathetic attempt to fill their squalid, forgetful days with assorted chatter and shenanigans, to grope for significance in a thankless void, the play finds its thematic concern as well as its central action. The scene-breaking refrain of “What do we do now?” echoes throughout, first as a kind of meta-theatrical gambit but before long as an increasingly urgent, and all too human, cry.

If that refrain has an extra song-and-dance panache in the current production, it is owing in part to the crack music-hall timing of McKellen and Stewart, and in part to Stephen Brimson Lewis’s set, which seems fused to the Cort Theater’s proscenium itself. The rubble in which Vladimir and Estragon strut and fret looks more like the ruins of a theater than the “country road” Beckett prescribed. But even pitched at such a stagey, near-farcical level, the play’s brilliant, coal-black gloom shines through.

How could it not? For “Godot” remains—there’s no use denying it—a profoundly atheist work, though we must not overlook the profundity for the godlessness. Beckett’s is not the blithe, hyperconfident, 21st-century atheism of Richard Dawkins, or the bland, self-satisfied scientism that constitutes a kind of default worldview in the educated West. It is instead the 20th century’s wounded, elegiac brand of letting-go-of-God—the entirely comprehensible incomprehension of intellectuals who felt poised between the Stygian maw of the Holocaust and the real probability of nuclear annihilation. For all its impish gallows humor, “Waiting for Godot” has, to my ears at least, an unmistakeably valedictory timbre; it sounds like the lament of a one-time believer who once took the promise of faith seriously, or at the very least understood its high stakes. Put another way: Beckett’s is a voice that anyone conversant with the stark desert landscape of the Bible—anyone who has, so to speak, sat picking scabs with Job or eaten locusts with John the Baptist—will recognize in a heartbeat.

Our Christian faith, of course, tells us that the bottomless emptiness we may often feel is never truly a void—that God is always with us, never more, in fact, than at our lowest moments. Perhaps, if I’m reaching a bit, I glimpse a reflection of divine love in the genuine sweetness and comfort that Vladimir and Estragon bring to each other, at least fitfully; indeed, McKellen and Stewart’s tramps often seem like a doting old couple. But what mostly endears “Waiting for Godot” to me is that the God-shaped hole at its center is a shape I know well. Beckett pointedly leaves it unfilled, while I (on my better days) try to see existential doubt and suffering as spiritual guideposts, but this difference in our conclusions does not diminish my empathy with his vision. The abyss his tramps are dancing at the edge of? I’ve been there, and over it but for the grace of God go I.

It is quite a different matter with Pinter’s “No Man’s Land,” a queasy parlor game that owes much to Beckett’s dramaturgy but lacks his theology. Here McKellen plays Spooner, a shambling, glad-handing poet invited, apparently by chance, to the forbiddingly cold estate of Hirst, a stiff drinker played by Stewart. Do the two men know each other, as they suddenly seem to in Act Two, after an alcohol-befogged first act in which they test the conversational waters to little avail? And what exactly are Hirst’s leather-clad hired men, Foster and Briggs, up to?

The only thing that is clear, actually, is that we are not meant to be clear about what these strange, imbalanced relationships are fundamentally about. Power, sex, money, age, class—all these factors come up for consideration, but Pinter, more puppetmaster than dramatist here, keeps reshuffling the deck. Truth to tell, despite director Sean Mathias’s admirably clear-eyed production (he also directed “Godot”), and the lucid supporting performances of Billy Crudup and Shuler Hensley (who likewise contribute fine, idiosyncratic work in “Godot”), “No Man’s Land” feels dated in a way that “Godot,” its elder, likely never will. While it is amusing to imagine how jolting, even menacing, the play’s shocks and non sequiturs must have seemed in the mid-1970s, such imaginings are not quite enough amusement to sustain an evening.

The piercing earthquake set off by “Godot,” on the other hand, has made a beautiful crevasse that only seems to acquire more beauty and depth as the years go on, and which invites fresh inspection. Much as we believers might take some comfort in the way atheism persists as faith’s loyal opposition, while neither quite extinguishes the other, the unlikely staying power of Beckett’s end-of-the-world play almost constitutes grounds for hope.