One year after ISIS rampage, Christians ponder their future in Iraq 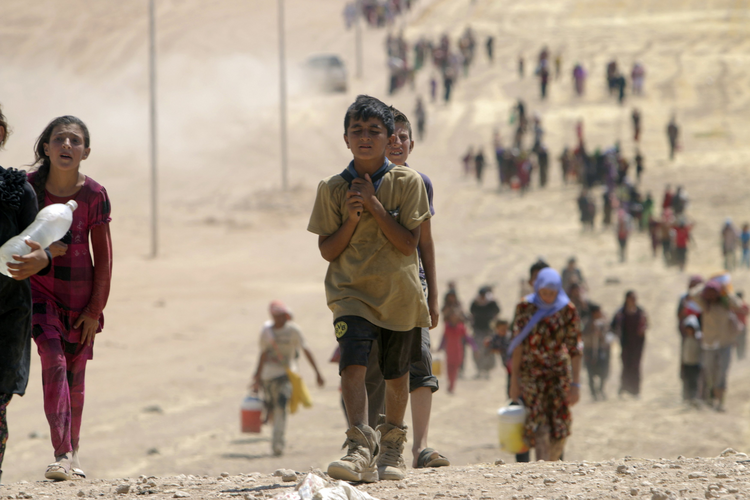 In the early days of last August as the summer heat scorched the plains of Nineveh, Islamic State militants began an ethnic cleansing around the city of Sinjar. Broadening an offensive which just two months before had startled the world with the capture of Iraq’s second largest city Mosul, ISIS drove thousands among the provinces’s Yazidi, Christian and other religious and ethnic minority communities from their homes in just a handful of days—their ill-equipped defenders melting away before the onslaught. Many fled on foot into the Sinjar mountains where they became trapped by ISIS (eventually rescued by Kurdish Peshmerga backed by U.S. air strikes); thousands more fled across Nineveh into the Kurdistan region. Hundreds of family members became separated during the chaotic flight; hundreds more, too elderly or infirm to be moved, were left behind. A unknowable number, including many children, died from exposure or dehydration in the attempted escape.

A year later survivors, now internally displaced people in their own country, remain in northern Iraq, protected by Kurdish Peshmerga forces, subsisting in often haphazard shelters around the cities of Erbil, Dohuk and Kirkuk and wondering when—wondering if—they will ever be able to return home.

Hani El-Mahdi is the country representative for Catholic Relief Services in Dohuk. C.R.S. is among the many humanitarian agencies on the ground attempting to support these refugees in their own land. Between June and August last year more than 833,000 fled their homes in the north-eastern province of Ninevah. C.R.S. and Caritas Internationalis are attempting to support about 88,000 in the north and plan to assist 100,000 over the coming year.

“These are people who escaped from genocide,” El-Mahdi notes matter-of-factly. “The Christian population has been completely uprooted from Mosul, and they’ve ended up here in Kurdistan.” The Christians, E-Mahdi says, are the second largest group of displaced people after the Yazidis.

Those who did not flee either converted to the ISIS approved version of Islam, paid a ransom to remain or were simply killed. El-Mahdi says many families have left loved ones behind whose fate is uncertain; many have had children, especially young girls, taken from them by I.S. Some are being held for ransom money; many are experiencing a far worse fate, sold into sexual slavery or forced to “marry” ISIS militants.

He says many families remain profoundly traumatized by their experience last year. One of the projects he oversees in fact connects children with trauma counseling. It is a program which indicates a shifting view among aid workers in northern Iraq; though humanitarian assistance remains an acute need—food, shelter, medicine—relief agencies are beginning to look at longer-term problems, creating opportunities for activities and education for the children among the IDP groups; shoring up the “temporary” housing Yazidis, Christians and others have managed to find around Dohuk and Erbil. After “winterizing” shelters just a few months ago, El-Mahdi says C.R.S. is focused now on make “temporary” shelters as habitable as possible. “The summer here is brutal as you can imagine,” he says.

C.R.S., Caritas Internationalis, Aid to the Church in Need, the Catholic Near East Welfare Association are just a few of the international Catholic organizations which are attempting to maintain the displaced peoples in northern Iraq, regardless of their faith or ethnicities. Chaldean Catholic Archbishop Bashar Matti Warda, C.Ss.R. of Erbil, Iraq, noting the persisting failure of the Iraqi government to assist the legions of dislocated people in his community, says he is deeply grateful for the support the local church has received from these groups and others, especially the Knights of Columbus which has delivered $3 million in aid thus far. “With this help we’ve been able to at least meet some of the needs,” he says, “but this is a huge task, and the church has not been trained for such a huge task.”

Archbishop Warda was in Philadelphia this week to participate in the launch of a new public awareness and fundraising campaign by the Knights of Columbus on behalf of Middle East Christians. And the archbishop is deeply thankful for the monetary support, but he is also eager to tap into whatever political pressure the U.S. Catholic community can help bring to bear toward ending the crisis in the Middle East altogether. He asks American Catholics to contemplate U.S. policy in the region, consider its goals and values: “What are you trying to achieve in the Middle East?” The answer to that question is likely not clear to many at this time. “You stand up for persecuted people all over the world,” he says. “Clearly [the Christians of Iraq] are a people being persecuted because of their faith.”

There is a political challenge in addition to the humanitarian challenge in Erbil, he says, finding some way toward a comprehensive regional peace. He explains the conflict in Syria is destabilizing the region and also drawing in scores of militants who are filling ISIS ranks.

That international effort must not only terminate the threat from ISIS, but find a way to bring peace to the entire region, or else Christians cannot have true security and return to their homes with any confidence in their long-term safety. He worries that even those Christians who have not been directly affected by the conflict see a diminishing future for Christians in Iraq, indeed throughout the Middle East.

“Right now we in a safe area,” the archbishop says. “The spirit of the Peshmerga is high, and we depend upon them.” But Erbil’s Christians “are watching what is happening to the [displaced] Christians,” he says. He knows many are wondering if the same fate could befall them one day.

“I am afraid that they will leave the country seeking refuge elsewhere,” Archbishop Wada says. Losing its Christians “would be a big loss for the Middle East and Iraq. For many centuries Christians have been active and present for the Iraqi people.”

Though the prospect provokes conflicting emotions—he is fearful of “emptying the Middle East of Christians”—the archbishop says the United States and other nations needs to do more to resettle displaced Christians. He knows many are suffering deeply and have little chance of returning home. “Certain cases might need special attention from the humanitarian point of view,” he says, and their resettlement should be expedited.

It is clear to both El-Mahdi and Archbishop Warda that what began as a provincial emergency appears have transitioned into a long-term humanitarian and political crisis in northern Iraq. El-Mahdi explains that, while responding to acute daily needs, C.R.S. staff are increasingly thinking about how to normalize the living conditions for the displaced population, working to regularize systems for water delivery and sanitation, reviving education for the children, many of whom have not been in a classroom since they fled their villages—long-term campaigns perhaps many hoped would not be necessary. Many of those banished from Nineveh, El-Mahdi says, initially expected a rapid liberation of their homes and villages from I.S., but they are beginning to understand that for the foreseeable future no one is going anywhere.

The presence of so many victims of ISIS terror in Kurdistan has been a heavy burden on the local community, according to El-Mahdi, but one they have been so far willing to bear. He adds that the local church has responded remarkably well to the crisis, but says the burden must now shift to the international community. The Kurdish towns and communities where so many have found relative safety and shelter were hardly affluent to begin with, he explains. Over the long-term there is no way they can be expected to provide for these many thousands of vulnerable people.

People here, according to El-Mahdi, a year into their expulsion from Nineveh, are beginning to worry that the international community has forgotten them. They note how the World Food Program struggles in appeals for continuing resources—most here cannot work and rely completely on now threatened WFP food vouchers—and they see other evidence of diminishing attention from donor countries and the deeper entrenchment of I.S. forces. Last month U.N. health services were sharply reduced throughout the region as anticipated donations dried up, leaving almost three million people without access to urgently-needed healthcare.

While support for the humanitarian effort flags, prospects of a political solution appear even more diminished. “There has been for a long time a lot of talk about the liberation of their communities,” El-Mahdi says, “but clearly this will take way more time.”

But “there must be an endpoint,” El-Mahdi says. “The whole international community has to step up to find a long term resolution for this situation” and to “make sure it never happens again.”

Kevin Clarke
@clarkeatamericaclarke@americamagazine.org
Show Comments (
3
)
Comments are automatically closed two weeks after an article's initial publication. See our comments policy for more.
Matthew Furjanic
5 years 9 months ago
A map highlighting Nineveh Province in Iraq and the cities cited in this article would have been a helpful addition to this article. It always makes it more real for me to be able to situate the places on a map. I did find it on Google Maps, though it took me a while to locate Dohuk.
Kevin Clarke
5 years 9 months ago

I'm afraid adding more than one graphic to a story messes up the auto-page layout too much, but I've linked to a UN response map in the second paragraph. It is a little confusing (way too much info for laypeople) but it at least provides an overview of the sites where IDPs are located and some indication of the precariousness of their position.

Bill Mazzella
5 years 9 months ago
The international community is not interested in helping refugees. In the US they are more concerned about defunded Planned Parenthood.