Create in Me A Just Heart: Treating pornography as a structure of sin 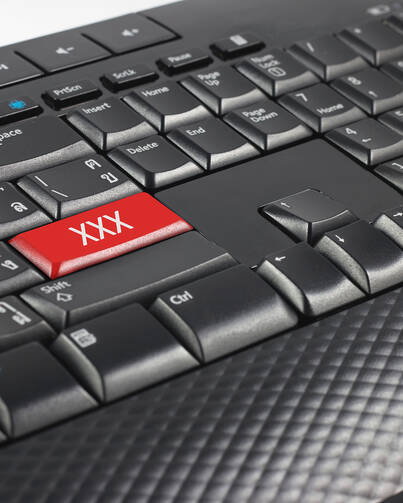 Last November, the U.S. Conference of Catholic Bishops released its pastoral statement on pornography, “Create in Me a Clean Heart.” Drawing on pastoral experience and a variety of current literature on the rise of Internet pornography and its usage, the bishops express concern for the negative influence of pornography on individuals, married couples and society as a whole. As they argue, pornography is both harmful and sinful. It is counter to the dignity of the human person and to the teaching of the church on the true purpose of sexuality as a bodily expression of relational love in marriage, which ought to be personal and private. Pornography harms those who participate in its production as performers, as these individuals are reduced to objects for others’ pleasure and profit. As such, pornography is a perversion of chastity and an expression of sinful lust.

This pastoral response makes a further significant contribution by beginning to frame ethical concerns over pornography in relation to the common good. It harms the common good by leading others to sin and damaging the community in the forms of adultery, domestic violence, child pornography and abuse, and sex trafficking. For this reason, the bishops powerfully identify pornography as a structure of sin: “It is so pervasive in sectors of our society that it is difficult to avoid, challenging to remove, and has negative effects that go beyond any one person’s actions.” This structure of sin results in “collateral effects,” which shape the way individual users engage those around them and participate in our culture. Unfortunately, the bishops’ analysis is only a brief overview of the social problems associated with pornography. Several points deserve deeper investigation if this structure of sin is to be adequately understood and resisted.

Pornography as a Structure of Sin

Second, the bishops identify the danger that viewers of pornography will fail to see the full humanity of those around them, reducing others to sexual objects. Further, as the bishops rightly observe, this kind of objectification can lead to particularly pernicious results for women, who may begin to reduce their worth as a human being to their status as a sexual object. When pornographic material depicts women not as sexual agents but as mere objects for the use of others, we are more likely to see women in our society as objects for sexual use.

This problem is especially evident in campus “hookup culture,” in which college students engage in a range of sexual activities without expectation of any form of commitment. In The End of Sex: How Hookup Culture Is Leaving a Generation Unhappy, Sexually Unfulfilled, and Confused about Intimacy, Donna Freitas details the social and sexual culture of college students, noting the heavy influence of pornography. In this context, while male sexual pleasure is taken for granted, female pleasure is ignored as women are seen as sexually desirable objects. Further, it is typical for women to describe their pursuit of hookups as a way to affirm their desirability. This desirability is then considered a kind of social capital that marks their value as persons.

Third, the U.S.C.C.B. highlights the connection between pornography and violence against women. As the bishops’ document notes, there is a great deal of violence depicted in pornography, which can lead to an increased likelihood that a man will abuse his partner. As Dines corroborates, the proliferation of pornography has led to the mainstreaming of increasingly violent material. Depictions of physical violence occur in 88 percent of the scenes in the top 50 most rented pornographic films. Additionally, 48 percent of the scenes in these films depict verbal aggression. Dines makes the case that much pornography is focused not only on sexual arousal but largely on the debasement of women. But because this violence is presented as sexual material, it often goes unnamed. In this way, sexual violence can begin to be seen as a normal expression of sexuality.

Depictions of violence in pornography are of particular concern because of their influence on our society’s understanding of rape. As Dines helpfully notes, the relevant question is not whether use of pornography leads directly to the perpetration of rape. Pornography does not cause an otherwise nonviolent man to become a rapist. This line of reasoning would be oversimplified. Rather, the necessary line of investigation is into the effect of the interplay of violence, coercion and sexuality on our culture’s understanding of rape.

While the psychological effects of pornography remain debated, there is evidence that viewing pornography with sexual violence and coercion does, in fact, have a negative effect on individuals. Neil M. Malamuth has shown the influence of depictions of rape in pornography. In one study, he discovered that exposure to rape scenes in pornography increases the likelihood that a male viewer will believe rape myths. Rape myths are stereotypes or false beliefs about rape, rapists and rape victims that are used to justify instances of sexual violence. For example, a common rape myth is that sexually flirtatious women are “asking for it.”

Malamuth specifically tested for agreement with rape myths that women find pleasure in being forced to have sex or being raped. Consequently, he found that men who watch violent pornography that depicts rapes are likely to believe that women sexually enjoy rape. This finding is reinforced by another study in which Malamuth found that male viewers of rape depictions involving a victim’s involuntary orgasm experienced comparable levels of arousal to those resulting from depictions of mutually consenting sex. Together, these studies suggest that the influence of pornography encourages male viewers to see sexual violence as an erotic expression of sexuality, not as violence. Such views have real consequences. A recent study of college men found that as many as 31 percent would force a woman to have sexual intercourse, as long as such actions were not named “rape.”

At the same time, pornography can be used not for explicitly sexual purposes but rather for the sake of embracing violence against women. Once again, campus social life, as analyzed in Michael Kimmel’s Guyland: The Perilous World Where Boys Become Men, provides a particularly sharp example. He explains that our culture often makes demands on young men to prove their masculinity through expressions of aggressive sexuality. In the face of rejection, college men may use pornography as a way to channel their anger and resentment. They may watch pornography in groups, not in pursuit of arousal but in order to see women debased and abused.

One popular genre is known as “BangBus.” In these videos a woman who is simply going about her daily business is picked up by a group of men in a minivan who persuade her to take off her clothes in exchange for money. The stakes continue to be raised until she is shown having sex with a group of men. The final humiliation occurs when, after dropping her off, the van speeds off as she is reaching for the money offered. As Kimmel argues, college men who engage in such behavior are finding their enjoyment specifically in the portrayal of women’s humiliation. Kimmel writes that some men watch BangBus as a group activity, yelling degrading things like “Bang that b----!” as they watch.

Finally, the bishops are concerned that exposure to pornography can lead to desensitization. This is a concern that Dines shares. In her view, it is critical to keep in mind that pornography is first and foremost a business. Consequently, it is in the interest of producers to keep viewers coming back again and again. In the face of boredom with the same kind of material, desensitized viewers require increasingly elaborate and violent depictions of sex to remain customers. This process of desensitization and subsequent search for a new thrill is one way that male viewers find themselves aroused by acts of violence and degradation that they previously would have found horrifying.

Through “Create in Me a Clean Heart,” the U.S.C.C.B. attempts to address these social concerns. But the statement mentions them only briefly and without much explanation. Despite addressing issues of violence, the overall framing of the document remains focused on lust and chastity. To take pornography seriously as a structure of sin would require moving violence to the fore, allowing it to frame how we ought to understand the ethical challenges posed by pornography. Through further exploration of the negative social effects of pornography, it becomes clear that the primary concern ought not be lustfulness. Rather, use of pornography entails complicity in a social structure that makes violence against women seem normal, even erotic. It is a matter of social injustice.

Such an approach would lead us to see that the primary necessary response ought to be oriented toward justice and social transformation. It would require solidarity with those who are victimized by sexual violence. Avoiding such material is good not only because it promotes moral purity but also because it challenges the cultural underpinning of unjust, gendered power and sexual violence. The key moral issue is not one’s own “clean heart” but one’s participation in upholding and passing on cultural forms that promote violence against women.

Megan K. McCabe is a doctoral candidate in theological ethics at Boston College. Her dissertation is on “Sex, Power, and Violence on the College Campus: Rape Culture and Complicity in Evil.”