The only candidates Mr. Trump and Mrs. Clinton could defeat are each other. 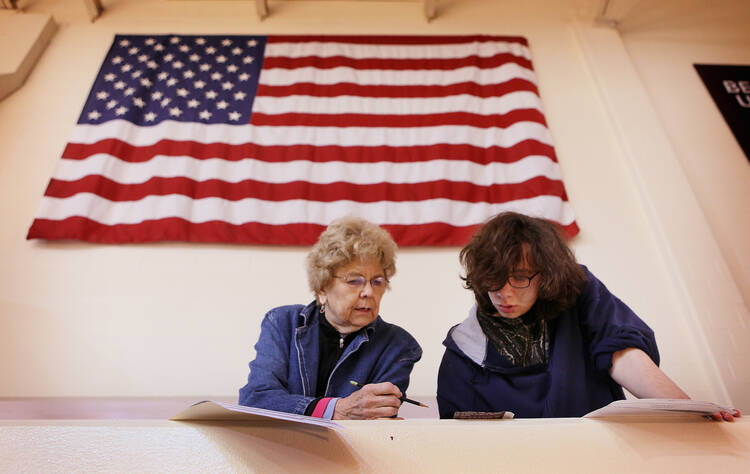 Labor Day has traditionally signaled the homestretch for presidential campaigns, but there is nothing traditional about this election.

These are not typical nominees. Hillary Clinton is the first woman and the first former first lady nominated by a major party. Donald J. Trump is a complete outsider, who defeated a dozen governors and senators. They have the worst favorability ratings for presidential candidates in polling history. Most people say Mrs. Clinton is untrustworthy, and two thirds of Americans say Mr. Trump is “not qualified” and lacks the temperament to be president. Conventional wisdom has often been wrong, but it is probably true that the only candidates they could defeat are each other.

Some of the religious dimensions in this demoralizing campaign have been unexpected as well. A recent Pew poll reports that Mrs. Clinton leads Mr. Trump 56 percent to 39 percent among Catholics, who vote for the winner more than other religious groups. Not surprisingly, Hispanic Catholics oppose a candidate who began his campaign by calling Mexican immigrants “rapists and murders,” by 77 percent to 16 percent. In a major change, white Catholics who attend church weekly oppose Trump by 57 percent to 38 percent, a shift of 19 points from their support for Mitt Romney in 2012. Among white Catholics, most Clinton supporters say they are mainly voting to oppose Mr. Trump.

On the other hand, Pew reports that white evangelical voters (but not all evangelical leaders) are more enthusiastic about Mr. Trump than they were about Mr. Romney. He leads 78 percent to 17 percent despite his difficulty expressing his faith, his past support of abortion and his three marriages.

The Republican Party has been the home of the religious right, but Mr. Trump is the most secular nominee in memory. The strong anti-abortion, traditional marriage and religious freedom positions in the party’s platform were missing in his acceptance speech, at the Republican national convention and at his rallies. The Democratic Party position on abortion is increasingly extreme, with the platform now calling for taxpayer funding for elective abortions. The cultural and secular left are dominant Democratic powers, but when the Rev. William Barber and some families of those killed in gun violence raised their voices, the Democratic convention had moments of powerful preaching, prayer and faith-filled witness. It has been an odd summer for religion and politics.

Both vice-presidential nominees come from Catholic families, but have differing relationships to the church and its teachings. Mike Pence says he is “a Christian, a conservative and a Republican in that order.” What he is not anymore is a Catholic. As an evangelical, he consistently opposes abortion but publicly resisted Catholic efforts to welcome Syrian refugees in Indiana. Tim Kaine worships at his mostly African-American Catholic parish and says he learned “the values of faith, family and work” in his service with Jesuits in Honduras. Mr. Kaine says his faith shapes his work on economic and social justice. He also says he is “personally opposed” to abortion, but has a 100-percent rating from the abortion lobby. These two leaders express the complexity and contradictions of Catholic witness in public life.

I learned at an early age that Catholics express their faith in differing ways and parties...and that is true this year as well. I am a product of a mixed marriage. Both my late parents were Minnesota Catholics, but my mother and her family were active Republicans. My dad and his family were diehard Democrats. My mom started a pro-life pregnancy center and would be a Paul Ryan Republican. My dad was a populist who would have “felt the Bern.” Neither would have adopted the unfortunate “I’m with Her” Clinton slogan. But this year my mother would have been appalled by Mr. Trump’s attacks on a Gold Star mother, refugees, John McCain and a reporter with disabilities. She would be unconvinced of his recent pro-life conversion. My dad would have opposed the extreme abortion policies in his party’s platform and Mrs. Clinton’s ties to Wall Street and her vote for the Iraq war. But I believe both of them—for very different reasons—would have been among the majority of church-going Catholics in the Pew survey who reject Donald Trump. They also would have reminded us to pray for our country at this time of testing on who we are, what we believe and what we will become as a nation.

John Carr is America’s Washington correspondent and director of the Initiative on Catholic Social Thought and Public Life at Georgetown University.

Show Comments (
5
)
Comments are automatically closed two weeks after an article's initial publication. See our comments policy for more.
William Rydberg
5 years 3 months ago
A thoughtful article. Let's pray for all candidates that God's will be done. in Christ,
joseph o'leary
5 years 3 months ago
Actually, it's only a "bad choice" for those who don't have a favorable opinion of either candidate: 27 percent. That's including the 5 percent that have no opinion or are undecided. Last week per Gallup, 33 percent of adult Americans had a favorable opinion of Donald Trump, and 40 percent a favorable opinion of Hillary Clinton. While that unhappy 27 percent will determine the outcome of this year's election, they are not the majority. It's fair to say they will be the ones who will cast a vote for third-party candidates or stay home.
marshall bell
5 years 3 months ago
so glad to have access to this magazine
Richard Booth
5 years 2 months ago
I very much enjoyed reading this brief, well-written biographical piece. My concern is about people who play two very different roles in life, a secular role and a religion-driven role. In the public arena, officials are elected to do the will of the people but, if they are Catholics, they are somehow expected to demonstrate "witness" to the belief system of the Church at the same time. I am in strong disagreement with theocratic governance, even if it is more indirect than direct. However, I do favor a well-founded moral compass for those who publicly serve. Sometimes, it seems to me, the elected must make decisions they would not personally promulgate. If they fail to do so, they do not represent their people. On the other hand, if role-conflict leads to intense internal upset that threatens their inner peace and compliance with Catholic beliefs, they should resign their positions in favor of the endorsement of their faith. This is a difficult choice, but the more important priority is remaining true to oneself and to what is most central to one's life.
Tim O'Leary
5 years 2 months ago
Excellent outline of the terrible situation thoughtful Catholics face this time around, where neither candidate seems to have sufficient personal integrity to deserve a vote (even if one agreed with their policies), and the main impetus for voting is to keep one or the other from further hurting our nation. A recent AP poll found 81% will fear more for our country after election day if their side loses, and a quarter who say it doesn't matter who wins: they're scared of both! While fear might not be the right word, I am in the quarter that opposes both. The only path left for me (the one I should always have, I guess) - just praying for our nation and for God's will to be done. St. (Mother) Teresa - pray for us and our country.