Colombia is moving toward peace, but issues remain, says archbishop

Colombia is moving toward peace, but issues remain, says archbishop 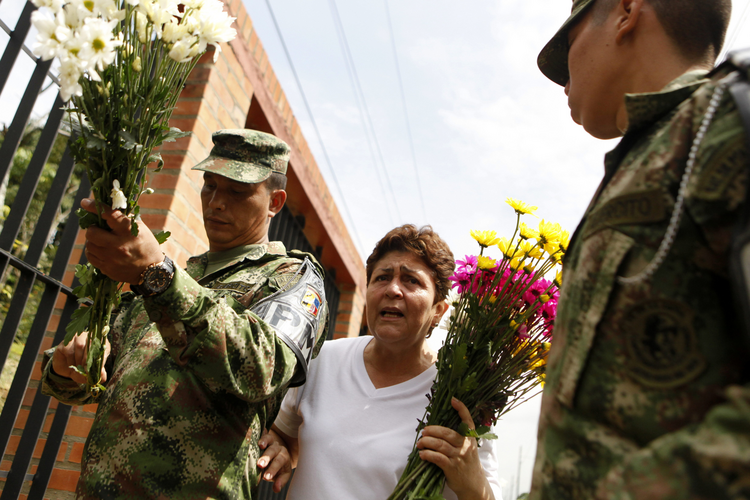 After decades of war, Colombia is moving rapidly toward peace, said Archbishop Luis Castro Quiroga, who has maintained a pastoral presence at peace talks in Havana.

Archbishop Castro, president of the Colombian bishops' conference, said the government and the rebels of the Revolutionary Armed Forces of Colombia still have "many issues to work through." He spoke in early June, before the June 22 announcement that the two sides had reached an agreement on several sticky issues, including a bilateral cease-fire.

The Tunja archbishop admitted that while the talks have been praised by other countries, "inside the country there is a lot of criticism."

For instance, former President Alvaro Uribe has sharply criticized the talks, claiming those responsible for violence will not be punished, but Archbishop Castro disagreed.

He faulted the government of President Juan Manuel Santos for not explaining the process well to the general public, which will have to approve any agreement in a referendum.

"I have said to the government and to those at the negotiating table that they need a proper pedagogy of explaining this process to the people. It's a complicated process, and a lot of things are invented to sabotage it," he told CNS. "For example, one day the news came out that they had agreed in Havana that each guerrilla who demobilized would get 2.5 million pesos every month (about $800). Not even a fifth of that is true, but everyone got angry. It was broadcast widely by the communications media, especially those that are opposed to the peace process. This shows how the government needs a clear and simple way to present a popular version to the people."

The current talks began in Oslo, Norway, in 2012, and are the fourth attempt in 30 years to end the war, which has been going on for more than half a century. Norway and Cuba are mediating the talks.

Sister Maritze Trigos, a member of the Dominican Sisters of the Presentation who traveled to the negotiations in Cuba last year to present a church document on the ethical foundations for peace, said the rebel leaders appear sincere in their desire for peace.

"I was part of a small group of church leaders that met with them for three days back in 2002 in Caguan, and their leaders were very hard people. They were very arrogant and would always sit at the table with a rifle in front of them. But when I traveled to Cuba, I saw them close up, and they are no longer so arrogant. They truly want to make peace," she told Catholic News Service.

Archbishop Castro said details of disarmament and demobilization—issues on which the two sides reached agreement—are particularly sensitive, because they present clear risks for both the guerrillas and the civilian population.

"The guerrillas have a lot of fear of disarmament because they know that they have a lot of enemies," he said. "And the first stage of demobilization is a concentration of combatants in certain areas, and that frightens the population. If you live close to one of these areas, you wonder if you're in danger. These are justified fears, so all of this has to be clarified for the people."

Father Alberto Franco, executive secretary of the country's Interchurch Justice and Peace Commission, said the guerrillas have a right to be wary.

"The Colombian state has historically been very good at signing accords, but then doesn't comply with them. And it kills those who signed them," Father Franco told Catholic News Service.

Rights activists here point to what happened to leaders of the Patriotic Union, a political party formed by the FARC and others during peace talks in the mid-1980s. Nearly 10,000 Patriotic Union members, including several presidential and congressional candidates, were killed in less than 10 years by right-wing paramilitaries and state agents.

While Archbishop Castro said he thought a tentative deal with the FARC, as the rebels are known, could be produced as early as July, he was not as optimistic about peace with Colombia's other major insurgent group, the National Liberation Army, known by its Spanish acronym, ELN. After months of secret talks between the government and ELN leaders, the archbishop said he is awaiting word on when public talks might begin. He added that the church would do what it could to help.

"We didn't have any role in the secret negotiations, but the government negotiators did come to us to talk about the issues. I also got a letter from the head of the ELN, who asked that the church participate in the public negotiations, wherever they take place. I consulted with the president and the government's peace commissioner, and they saw this is a very positive thing. So I replied that we were very willing to accompany the process. We would not be negotiators. We would not take the place of the state, but we would help everyone there. So we named a commission of five bishops from the regions where the ELN operates, and they are ready to help whenever they can," Archbishop Castro said.

He said there would be no further negotiations with right-wing paramilitaries, who benefited from a flawed and ineffective demobilization that began in 2003.

The right-wing groups have been labeled Bacrim, a Spanish acronym for criminal bands. Archbishop Castro agreed with the label, insisting that the paramilitaries are fundamentally different than the guerrillas.

"The guerrillas have what I would call a healthy objective, that the state would be transformed so that it is more just. But their methods are horrible. They decided to take up arms and they decided to kill," Archbishop Castro said. "The criminal bands have the objective of enriching themselves; it has nothing to do with justice. It only has to do with taking advantage of others, and nothing in favor of the common good. That's why they are criminals. That's why the state is willing to talk with the guerrillas but not with the criminal bands."

The archbishop said Pope Francis' Year of Mercy comes at a good time for Colombia, as the country is pondering issues of forgiveness and mercy. He said that as the nation moves toward peace, it is important for society to keep in mind the complementary roles of forgiveness and justice.

"Forgiveness is a personal attitude, but it doesn't stop the offended person from demanding justice. I can forgive the person who stole my land from me, but I can also demand that they give my land back. They need to go together, forgiveness and justice. And together they will lead us to peace."