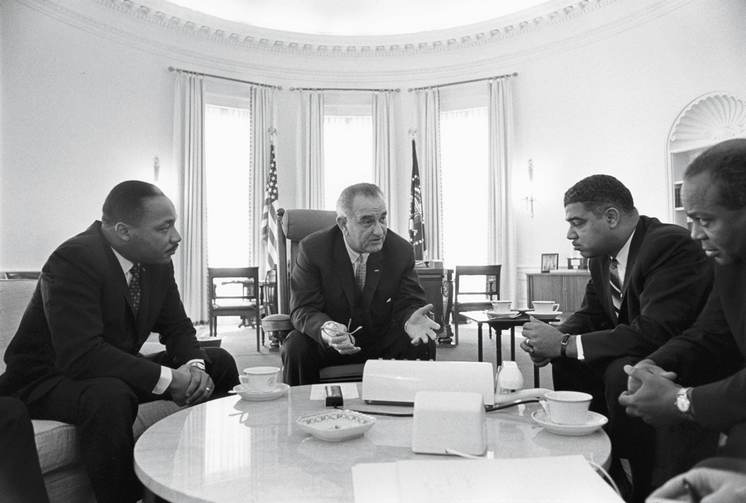 One had a feeling all along that the civil rights bill would pass. There was too much at stake even to think of defeat. In the history of nations, as of men, there inevitably arise great crises during which the future hangs precariously in the balance. Sometimes the crisis is surmounted and nations go their triumphant way. Sometimes it is not, and then they either disappear from history or languish in weakness and decadence.

Surely, the civil rights issue is such a crisis. Ever since the Emancipation Proclamation—indeed, ever since the founding of the Republic—the United States has been living a lie. It has proclaimed that all men are created equal, but has denied in practice the equality of Negroes. It has vindicated a universal right to life, liberty and happiness, but has compromised that right for nearly a tenth of its people. It has emancipated its slaves, but has refused to grant them the full birthright of free men. It has taken a stand for the liberation of colonial peoples everywhere, but has condoned second-class citizenship at home.

For a number of reasons—not the least of them the manly demand of Negroes for the full enjoyment of their rights—this lie can no longer be ignored or endured. It was this realization that led President Kennedy to sponsor the civil rights bill; that moved President Johnson to grasp the fallen torch and see the fight through; that persuaded Sen. Everett McKinley Dirksen—who alone in the Senate could mobilize the conservative Republican votes needed for closure—to place country before party and assure final victory. And it was this consideration that led to an unprecedented mobilization of religious forces, which enlightened minds darkened by prejudice and purged the nation’s conscience. While love, rather than law, as the Catholic bishops of Pennsylvania said on the eve of the Senate vote, will ultimately assure the oneness of American society, “law must today lay the foundation of justice on which alone charity can flower.”

There was never any question that the Senate would pass the civil rights bill if it had a chance to vote on it. A national consensus existed and Congress knew it. It was a pity, then, that the South did not surrender gracefully; that so much time and effort were wasted in a morally repugnant cause. Senator [Richard] Russell and his band had reason, of course, to hope that they could thwart the national will, as the closeness of the closure vote showed. But what a dangerous and ignoble hope it was. We believe that there were millions of Southerners who did not share it. In their heart of hearts they know that a way of life insidiously calculated to destroy the dignity and manhood of an entire race is as displeasing to God as it is insulting to His creatures. In this case, surely, the silence of so many decent Southern whites did not mean consent.

Despite the sectional battle lines in the Senate, the civil rights struggle, which now enters a new phase, is not today, if it ever was, a purely North-South affair. As this Review has said time and again, the North shares with the South the guilt of racial discrimination. Far from being a second Union victory over the Confederacy, the vote in the Senate was a victory for the nation. If there are any wounds that need binding up now, they are the wounds of our Negro brothers. This is a task for North and South alike. Let us get on with it together.

This article also appeared in print, under the headline “Civil Rights Aftermath,” in the July 7-14, 2014, issue.