From Churches to Church: Assessing the movement toward Christian unity 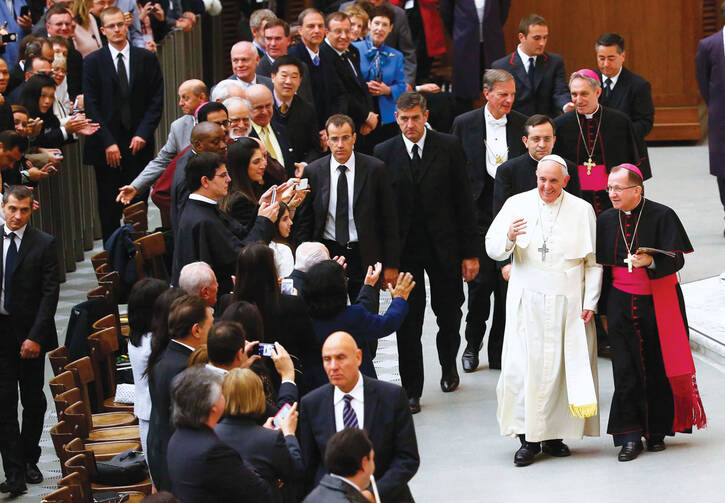 What will tomorrow’s church be like? Will it be a truly catholic (small “c”) church, a communion of local churches living in visible unity? Or will it be a multiplicity of churches and communities, even more divided in faith and life? The present estimate of the number of Christian denominations is roughly 43,000, according to the Center for the Study of Global Christianity at Gordon-Conwell Theological Seminary. In 1900 the number was 1,600. From a Roman Catholic perspective, Christian unity means a communion of churches sharing a common heritage and living in visible communion with each other.

Recently the World Council of Churches published an important convergence (not consensus) text entitled The Church: Toward a Common Vision. The statement is structured in terms of four ecclesiological issues. Relatively brief, it treats successively the church’s essentially missionary origin, its nature as a communion, its growth toward the kingdom and its relation to the world.

To summarize briefly, the church takes its origin from the saving activity of the Trinity. Visible unity is important for its nature and mission, a point that is emphasized repeatedly. Such unity may require changes in doctrine, practice and ministry, so that the churches may recognize in each other the “one, holy, catholic, apostolic Church” (Chapter I). The text stresses the nature of the church as a communion. While diversity is a gift of the Lord, the unity and catholicity of the church means that each local church should be in communion with all the other local churches (Chapter II).

Growing toward visible unity requires “communion in the fullness of the apostolic faith; in sacramental life; in a truly one and mutually recognized ministry; in structures of conciliar relations and decision-making; and in common witness and service to the world” (No. 37). But many differences remain about the number of the sacraments or ordinances, who presides at the Eucharist, how ordained ministry is structured and whether it is restricted to males, the authority of councils, and the role of the bishop of Rome (Chapter III). The nature of the church is missional. Participating in the Divine Mystery, the church serves God’s plan for the transformation of the world. It proclaims the Gospel, celebrates the sacraments and in manifesting the newness of life given by Christ anticipates the kingdom already present in him, though it acknowledges a need for the churches to be accountable to each other because of new conflicts over moral principles and ethical questions (Chapter IV).

The text from the World Council of Churches is significant for a number of reasons. First, it presents a transdenominational ecclesiology that should find resonances in the different churches. Second, because they share a Trinitarian faith, each church is called to live in visible communion with other Christian communities. Each has a structure, consisting of apostolic faith, sacramental life and a recognized ministry. Third, the text’s view of salvation is not narrowly individualistic but serves God’s plan for the transformation of the world. Finally, the centrality of the Eucharist in the text is remarkable; it clearly sees the church as a eucharistic community. But will it fly?

In the West there are new obstacles to ecumenism. The vision of visible unity seems to be slipping away for many of the Reformation churches. Some stress justice over unity. Many are concerned today with a new search for denominational identity, as Cardinal Kurt Koch, prefect of the Pontifical Council for Promoting Christian Unity, has noted. There is a lack of agreement on sacramental practice, and the Eucharist is not yet central in many denominations, including many evangelical communities.

Meanwhile, mainline churches in the United States and Western Europe continue to lose members. The Rev. Michael Kinnamon, general secretary of the National Council of Churches, points out that those denominations that were once pillars of the ecumenical movement are in many places experiencing diminishing numbers and resources, with a resulting toll on ecumenical organizations. Member churches of the World Council of Churches constitute little more than 20 percent of world Christianity, and their number is diminishing. Kinnamon asks if the W.C.C. is becoming too ideological, substituting a commitment to economic, social and ecological issues and losing ecumenism’s traditional vision of a reconciled church, sharing the Eucharist and making decisions in common. Some point with hope to the growth of evangelical Christian communities, but the claim that they represent 40 percent of Americans may be greatly exaggerated. In his book The Great Evangelical Recession, John Dickerson cites a number of studies to show that the actual number is closer to the range 7 percent to 8.9 percent.

But if Christianity is diminishing in the West, it is flourishing in Asia, Africa and Latin America, as Christianity’s center of gravity shifts from Europe and North America to the Southern Hemisphere. A recent Pew Forum study finds that more than 1.3 billion Christians live in the global south (61 percent), compared with about 860 million in the global north (39 percent). Mark Noll notes, “This past Sunday it is possible that more Christian believers attended church in China than in all of so-called ‘Christian Europe’.” Thus the profile of global Christianity has changed dramatically, and the Western church cannot afford to ignore the fact.

Much of this growth has been in the church’s evangelical, Pentecostal and neo-Pentecostal expressions. Also rapidly growing are the independent, indigenous churches, whose members comprise about one-fifth of all Christians today and are thus not members of traditional denominations or churches. Allan Anderson, professor of mission and Pentecostal studies at the University of Birmingham, England, cites studies that claim that there are “628 million ‘Pentecostals, Charismatics and Independent Charismatics,’ collectively termed ‘Renewalists,’ in the world in 2013; 26.7 percent of the world’s Christians.” Roman Catholics number over one billion. That means that Roman Catholics, Pentecostals and charismatics together amount to close to 75 percent of the total 2.1 billion Christians in the world.

This recentering of the majority Christian population to the global south poses significant challenges for the ecumenical future of the church. These southern Christians and some in the West see the World Council of Churches’ statement on the church as being too traditional and excessively Western in its approach. Much less concerned with doctrine, confessional difference or ecclesiology, these new communities have a different agenda. Unlike the Enlightenment-influenced West, they sense the nearness of the supernatural, place great emphasis on healing—of body, mind, soul, spirit and society—and stress life issues like AIDS, violence and poverty.

Some of these new churches are quite distant from the historic Christian tradition. Most are not eucharistic communities. Some preach the “prosperity Gospel,” promising wealth to those who follow Jesus. Their denominational boundaries are often porous, and multiple Christian identities are not unusual. A recent report on Pentecostal-evangelical and African-initiated churches in South Africa describes a self-styled prophet who calls on his congregants to eat live snakes or underwear. These churches, built around charismatic preachers, “lack any real structure or theology apart from an eccentric literal reading of the Bible and people’s willingness to believe in what is preached.” They pop up and just as quickly disappear. And not a few Christians in these new churches, not all of them dysfunctional, are decidedly anti-ecumenical, as was evident at the W.C.C.’s 10th assembly in Busan, Korea, in 2013, where hundreds were protesting not just the assembly but the ecumenical movement itself.

Some today, like Robert Jenson, a Lutheran, are speculating that the ecumenical future lies with the Roman Catholic Church, the Eastern churches and Pentecostal groups; or, to cite Cheryl Bridges Johns, a Pentecostal, with a reformed Catholicism and a mature Pentecostalism. If anything should move our separated churches to learn to work together, it should be the increasing number of the so-called nones, those who are religiously nonaffiliated. According to the Pew Forum, they now constitute 23 percent of adult Americans and 35 percent of millennials.

Given the enormous ecclesiological diversity of the new churches of the global south, will these churches be able to receive the W.C.C. statement on the church as a challenge to renewal of ecclesial life, commitment to justice and peace, mission and unity? Will it help these nonliturgical and often noncreedal communities to re-engage with the great tradition? Probably not. But these are the churches growing today, and their members often have strong faith and great energy. Therefore we should ask, how might the Catholic Church and the confessional churches establish the bonds of communion that witness to a common ecclesial life?

First of all, it is important to keep in mind that ecumenism always begins in friendship. When people from different churches or traditions get to know one another, they no longer remain the “other” but become friends, associates, brothers or sisters in Christ. That holds also for relations between more traditional Western churches and these new churches. Second, the social mission of the church may offer common ground for addressing together many of the practical problems these new churches face. While there are often ethical differences between the churches, most of our churches face the same differences within our communions. Finally, we might ask, what if the Catholic Church, the Orthodox churches and the other liturgical churches were to relax somewhat their sacramental discipline to extend occasional eucharistic hospitality to those from these new churches who are able to recognize Christ’s presence in the Eucharist and are willing to live in communion? Might some experience of common worship lead to a new sense of the church as a eucharistic community?

So what is the future of the church? Christian unity is God’s work, not ours, as recent popes have emphasized, but we are all called to work toward it, that the world may believe (Jn 17:21).