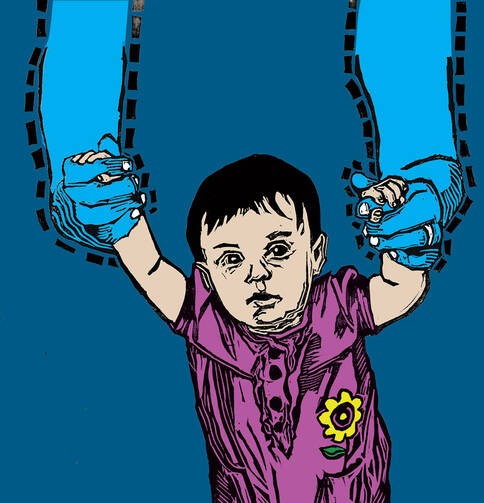 The anticipation was stifling. For days we knew that our little one would be leaving us forever, on her way to a place where she would be a part of a family forever. We readied ourselves as best we could. We threw her a going-away party, though at only 9 months she knew nothing of the life-changing event that lay ahead of her. The party, we knew, was merely an attempt to ease the pain of letting her go out into an unfamiliar world without the safety of the arms she had known since foster placement in our home at the age of one week.

From her perspective, the drive to her new mother could as well have been a trip to the grocery store. But this day would end very differently from any other day in her short life. And though I knew the day would come and that it was the best thing for her, my inability to make her understand was one of the most difficult circumstances I have ever had to confront. Giving her away caused me anguish not only because we would miss her, but because I felt I was blindsiding her, setting her up only to knock her little legs from under her. I feared that in her eyes, I was abandoning her. After leaving my first foster baby to her new mother, my body underwent an intensity of emotions unlike anything that I had experienced in my life.

For nine months, I had worked to help this child learn how to bond with her “forever” mother. From the beginning of our relationship, I knew that she would leave. However, as was necessary over those months, she became a part of me and I a part of her. When I left her in the care of her new mother, my heart felt it was betraying this part of “us.” For days after, I cried tears of grief unlike any I have shed in years; yet, simultaneously, I experienced an overwhelming joy for her as she embarked on her wonderful new adventure.

Some people ask why I became a foster parent if it causes so much pain. Why would anyone invite this type of anguish into his or her life? And why will I do it again? But I see these emotions—pain, suffering, wondrous joy—as evidence that God has called me as a Catholic, a Christian and, most of all, as a mother. When I was given the gift of motherhood, I received with it the grace necessary to understand that being a mother requires me not only to teach and serve, but also to let go and suffer loss. Why then, should I confine these graces to raising my five birth children? I am called to serve all of God’s children. I am called to be also a mother to the motherless.

Many people wanted to know how I could give her away. The answer for me is simple. She was never mine to begin with—not because she was a foster child but because she, like each of my own children, is God’s child. She belongs ultimately to God.

This is not to say that foster care is required of every Christian parent. This is to say that if you are a Christian, God is calling you. Your call and mine will be different, but one way or another, we are all called to serve. And when we answer God’s call—and by doing so enter into the very heart of Christ—we are filled with the grace necessary to rely on our faith to carry us through, not away from, life’s challenges. But if we remain idle, fearful of the emotional pain attached to entering the emotional struggles of the world, we will not fulfill God’s call, and we will undoubtedly feel an emptiness that is insatiable by any other means.

At times, we measure gratification with perceived success. Did we succeed? How much did my family influence the life of this beautiful little girl? We may never know. But we do know that for the first nine months of her life, she was the baby of our household and a member of our parish community. She was our universe. She was an answer to a prayer for fulfillment. This child filled an empty spot that God had created just for her.

Donna M. Maccaroni, a special education teacher and the mother of five children, lives in Lawrenceville, N.J., with her husband. She welcomes foster children through the Children’s Home Society of New Jersey.

Show Comments (
6
)
Comments are automatically closed two weeks after an article's initial publication. See our comments policy for more.
Susan Kaup Kelley
9 years 9 months ago
I am a developmental psychologist and a specialist in adult-infant attachment (see Bowlby/Ainsworth for details). I must protest most strongly against the cruel foster care system which seems to be accepted without qualm by social service agencies. The writer is indeed a primary, perhaps the primary, attachment figure for this 9 month old infant. The family in which the baby has lived comprise her attachment system. These technical terms disguise emotional and cognitive realities which are destroyed by the separation of the baby from the family. The effects for the child are lifelong. Except in cases of abuse and neglect, our society should not allow such attacks upon defenseless children.
Christie Martin
9 years 9 months ago
I am also a foster mother and have been fostering for 10 years. We have had 10 children placed in our home, and have adopted two of them: the only two who were adoptable. I was fostered as an infant and then placed with another family for adoption. Infants come into the system singly when their circumstances are so horrific that someone cried out for them. Foster care is hard on everyone involved, but until it the system is improved or replaced, please consider that the children who have come into our home through the foster care system as infants have invariably been in such dire circumstances that the alternative was death. Everyone would prefer a better system, to be sure, but please do not condemn those of us who are trying our best to work with what we have to make infants' lives better and safer by getting them to safety. With your passion, we sure could use you and your skills. Have you considered looking into starting your own agency, becoming a child advocate or a foster parent yourself?
Barbara DiGangi
9 years 7 months ago
Donna, Thank you for sharing such a personal experience. I am currently a licensed social worker and supervisor at Bridges to Health, a program that provides services for children with developmental disabilities in foster care. I've never had a foster child myself, but I can imagine the feelings a foster parent naturally can go through. Foster parents inspire me and I admire them greatly. I agree that there are numerous flaws within the foster care system (and other social service systems). As professionals, we do the best we can to advocate for improvements, protest cuts and do our best work in our day to day activities. I know when children are placed as infants it is most definitely in the worst case scenario. As also someone who has experience with attachment (you can learn more at www.theprojectbond.com), I want to reassure you that you provided this child with the attachment she needed at this time in her life. Secure attachments are formed over time but they can be formed with multiple like-minded adults. As long as the transition was healthy and smooth to the "forever" family, I am sure she will be just fine. In fact, although feeling a sense of loss, you should focus on the love and crucial attachment you provided her with. Her relationship with her "forever" mom and/or dad will be better because of the early "tools" and trust you instilled in her. My goal for Project Bond is to educate foster care agencies and policymakers to incorporate bond-sensitive practices that can enhance the lives of children who have undergone traumatic circumstances and early childhood instability. As professionals, we have to do more than just point out the flaws and actually think of innovative ways to make it better. When people like you write articles like this and draw attention to the realities of "the system" - it can only help. I have a feeling that any child that enters your home will be very blessed to be there. I also imagine that the process of "letting go" will get a bit easier for you as you continue your journey as a foster parent - don't be afraid to ask for help and support when needed!
Karlrod Nick
8 years 12 months ago
Thanks for adding this type of informative message, getting some knowledge. Childhood is a very pleasure time for everybody, how can people maintain their child for the future is most important. In the childhood every people should learn the children about the bond with parents and family members.baby goods
celia unga
8 years 8 months ago
@Karlrod Nick I know what you mean, but sometimes it is not so simple to do it. I will try to apply the same strategy and I will be back with reviews! Let's hope that I will have a girl using these methods!
Kris Wake
8 years 1 month ago
I always proud of foster parents because they're willing to open their lives for children that are not their own.Kris