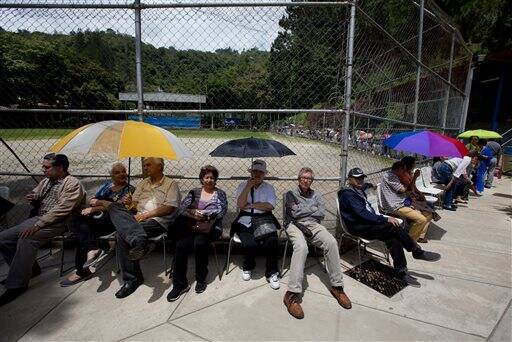 Many critics of Venezuela’s President Nicolás Maduro say he is such a disastrous head of state because he is a former bus driver with no college education.

That is bunk. Luiz Inácio Lula da Silva was a metal worker who never reached high school before he was elected president of Brazil in 2002, and he turned out to be one of the best leaders the country ever had. Granted, Brazil has its own big messes right now; but it is not the apocalyptic moonscape of food and medicine shortages, daily blackouts and rampant homicide that Venezuela has become.

Venezuela is crashing not because of President Maduro’s lack of schooling but because of his overload of ideology. His delusional, left-wing dogma has brought the most oil-rich nation in the Western Hemisphere to the brink of social and economic collapse. Venezuela’s gross domestic product is forecast to shrink another 8 percent this year after last year’s 10-percent contraction. Not that a leader espousing right-wing dogma would be any better. Venezuela proves the suicidal perils of following any dogma to the extreme.

Consider Maduro’s latest Marxist madness: his campaign against Venezuela’s largest food and beer producer, Empresas Polar. At the end of the 20th century, Polar and its owners, the Mendoza family, were admittedly symbols of the elite’s unbridled wealth and privilege in Venezuela, a nation where half the population lived in poverty despite its petro-prosperity. Popular anger toward that epic inequality brought the late Hugo Chávez and his socialist Bolivarian Revolution (a.k.a. Chavismo) to power in 1999.

Since then, under Chavismo, Venezuelan officials have confiscated and nationalized hundreds of private companies and driven most of them into the ground. The enterprises they have not seized have been driven into the ground anyway because of an absurd regime of government price and currency controls.

Those policies give businesses scant incentive to produce and just as scant access to hard currency for importing what they need in order to produce.

This year those hurdles finally hamstrung Polar, which cannot mill enough corn flour used to make Venezuelan staples like arepas, a flat, round, unleavened patty often used to make sandwiches. It has even had to halt brewing its internationally known Polar beer.

Maduro’s response? Accuse the company of taking part in an “economic war” against him and threaten to seize its plants. That would certainly mean the death of a corporation whose importance to Venezuela’s economy is second only to the state-run oil monopoly, Petróleos de Venezuela, which itself has been largely driven into the ground by Chavista mismanagement and collapsed crude prices.

Worse, a government takeover of Polar would exacerbate the suffering of Venezuela’s poor. And that is perhaps the most unforgivable result of this wrecked revolution.

I was once a volunteer teacher in one of Caracas’s largest slums, Catia, and as a journalist I have spent a lot of time in Venezuelan barrios like it. So I applauded Chávez’s early efforts to steer the oil revenue their way for a change—producing the first clinics, schools, bodegas and potable water many of them had ever seen.

That was then. Chávez died three years ago, but even before his demise, Chavismo had begun to ruin what it once achieved for Venezuela’s underdogs. Its failures were obvious last December when even Catia—Chavismo’s cradle—voted against the socialists and handed the National Assembly to the opposition.

“At the end of the day,” said Marialbert Barrios, an opposition candidate who won an assembly seat from Catia, “the Chavistas care more about their politics than about the poor. They’re telling Venezuelans to eat fried rocks.”

The poor do not trust the opposition all that much, either. Still, polls show three-fourths of Venezuelans want a presidential recall referendum this year. But despite more than a million signatures gathered for a recall petition, the Chavista-packed election commission, under Maduro’s control, is blocking the effort.

Meanwhile, street protests intensify as Maduro rolls out a new food distribution system that blatantly favors Chavista loyalists. That is the real economic war being waged in Venezuela. And you do not need a college education to figure that out.

Show Comments (
2
)
Comments are automatically closed two weeks after an article's initial publication. See our comments policy for more.
Stanley Kopacz
6 years 1 month ago
The democratic socialist hybrid seems to have the best balance. The beer in Germany is wonderful.
JR Cosgrove
6 years 1 month ago
Has America, the magazine gone mad. Publishing such is unheard of. Where is Bernie Sanders and his supporters when we need them. Maybe we should send them all to Venezuela to fix the situation. Viva Free Market Capitalism, it is the only moral way to distribute goods. And German beer is very good. Just got back from there but everyone else but a couple of us were drinking wine. It's the end for them.