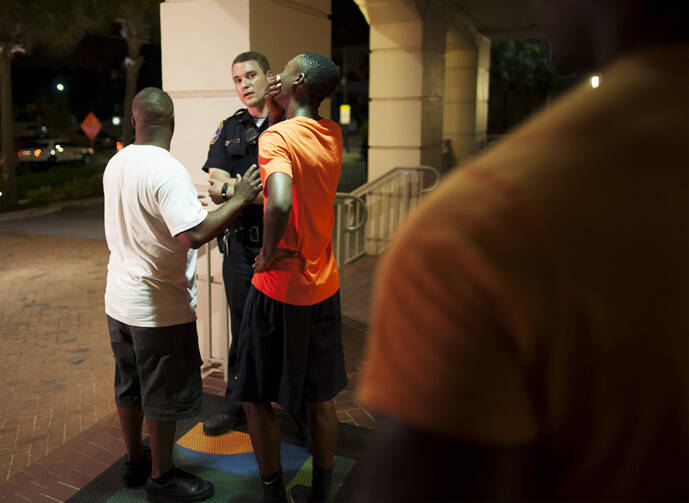 The images were riveting in the early hours Thursday morning: Residents shaken to the core in Charleston, S.C., holding hands and forming a circle of prayer down the street from what was another mass shooting in the U.S.

It has happened before in a kindergarten class, a college campus, a movie theater, a McDonald’s. The words resonate as places forever linked with the unspeakable: Sandy Hook, Columbine, Virginia Tech, Luby’s.

And this time it was a humble church, the Emanuel African Methodist Episcopal Church, the oldest AME church in the South, where people had gathered for a prayer meeting Wednesday night.

“I do believe this was a hate crime,” Police Chief Gregory Mullen said after confirming that nine people were dead.

“This is a tragedy that no community should have to experience,” Mullen said. “It is senseless. It is unfathomable that someone would walk into a church when people are having a prayer meeting and take their lives.”

Said Charleston’s mayor, Joe Riley: “This is inexplicable …. It is the most intolerable and unbelievable act possible. The only reason someone could walk into church and shoot people praying is out of hate.”

Since 2006, there have been more than 200 mass killings in the U.S. The FBI defines a mass killing as an incident with four or more victims.

A USA TODAY special report, Behind the Bloodshed, documents that in the United States mass killings occur about every two weeks. Public massacres such as the 2012 shooting at Sandy Hook Elementary School in Newtown, Conn., account for one in six mass killings.

The report also documented how the majority of mass killings are family-related. Seventy-seven percent of mass killings involve a gun, and nearly three out of four guns involved were handguns, USA TODAY found.

One of the most stunning revelations in the report: A mass killing often involves a failed safety net: protective orders that didn’t work, gaps in the mental health system, lapses in immigration enforcement.

Here are some of the deadliest rampages in U.S. history:

• April 16, 2007: Seung Hui Cho, a 23-year-old student, goes on a shooting spree at Virginia Tech in Blacksburg, Va., killing 32 people, before killing himself.

• Oct. 16, 1991: George Hennard, 35, crashes his pickup through the wall of Luby’s Cafeteria in Killeen, Texas. He shoots and kills 23 people before committing suicide.

• Aug. 1, 1966: Charles Joseph Whitman, a former U.S. Marine, shoots and kills 16 people from a university tower at the University of Texas in Austin before being shot by police.