Centered by Prayer: Living as a Catholic in a Muslim world

Centered by Prayer: Living as a Catholic in a Muslim world 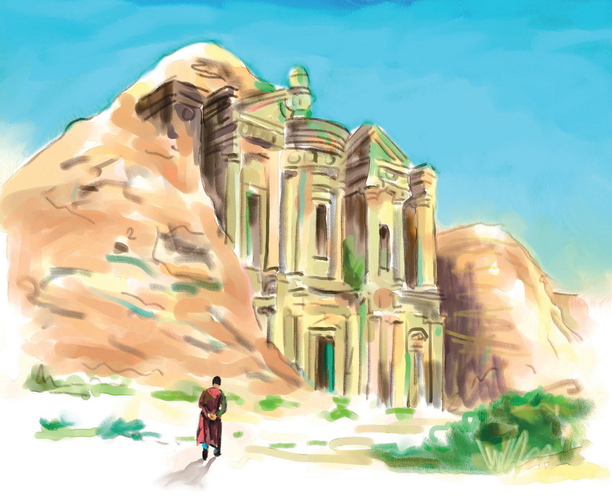 It’s dawn in Amman, and I crack open the window of my room to catch the call to prayer singing across the terraced landscapes from the nearest mosque. The wail of the muezzin through the loudspeakers invites the Muslims around me to their first prayers of the day; four more such calls will follow throughout the day. My Jordanian driver and guide, Walid, had explained this all to me yesterday, giving me a thumbnail version of the spiritual practices of the faith of his fathers in broken English. I am visiting Jordan for a few days in the late fall, called here for work but also seeking to deepen my own understanding of this fascinating but unfamiliar part of the world.

What I had originally heard as a single call, Walid points out to me, actually consists of two separate moments: the initial summons, in which listeners are informed that the time for prayer has arrived, and then the prayer itself. The gap between the call and the prayer gives faithful Muslims the opportunity to complete their ritual ablutions, cleansing and purifying themselves for the prayer. These five daily prayers remind worshipers to center their lives upon God, to remain ever thankful for his blessings and to live according to his will. According to at least one estimate, just around half of all Muslims obey the daily summons to prayer all five times.

Throughout my visit to the city of Amman, trips to the small villages on its outskirts and one long drive into the desert, I see mosques everywhere. They dot the landscape like Christian church steeples in a New England town. But unlike those more familiar steeples, each mosque comes equipped with a tall minaret, and each of those minarets boasts loudspeakers pointed to the four corners of the earth. From those loudspeakers drift the calls, the first one coming just prior to dawn, the last just after sunset. At one time the calls were issued live, in real time; now they are mostly recorded versions.

On my third day in Jordan I escape the chaos and crowding of Amman for a visit to Petra, the site of such natural and constructed miracles that it could feed a lifetime’s appetite for visual beauty. The opening of the narrow canyon known as the Siq onto the immense tomb carved into the red rock face of the cliffs—made famous in the final scene of “Indiana Jones and the Last Crusade”—is even more breathtaking and majestic than the many photographs I have scrolled through on the Internet prior to my trip.

But that enormous sculpture, known as the Treasury, which is depicted in nearly every image of Petra, represents only a fraction of the wonders to be found there. From the Treasury one strolls past camel drivers and donkeys down the Street of Facades, where tomb after sculpted tomb has been carved into the ragged cliffs. Some of them are massive, stately affairs, rectangular and columned; these give way to outcroppings of red rock honeycombed with tomb openings, nothing sculpted but the rough entrances themselves. Tea and souvenir stands line the popular hiking routes, with gently insistent Bedouin shopkeepers hawking their wares: “No charge for looking!”

In the early afternoon I climb up a winding set of stairs to one of the higher and more ornately carved tombs, with a broad front porch and muscular columns. I pass several souvenir stands along the way but notice with curiosity that they are empty; the sellers have disappeared. I pause to peer at the jewelry laid out on one table, happy to browse without pressure—but then notice, on carpets behind the tables, two women bobbing up and down in their prayer rituals. Although I had not heard the call, I check my phone and see that it’s prayer time. And so even here, among the trinkets and the rocks, the Japanese tourists and the Bedouin camels, the women hear the call and pause to make time for God.

That night I sleep more easily than I have since my arrival in Jordan, exhausted from my day of hiking and with my body slowly adjusting to the time change, but still I rise before dawn. I crack open the window of my room and, as if it were waiting for my rising, the call drifts through the darkness from the mosque below. I don’t know the prayers the Muslims around me are reciting, but I sit down in the chair in my room just the same and make my opening: “In the name of the Father, and of the Son....”

I’ve battled with prayer my whole life—just as, in many ways, I’ve battled with my religion. When I was a young man, my father used to quote from memory Francis Thompson’s poem “The Hound of Heaven,” in which religious faith stalks the speaker relentlessly. Either the poem or the hound has performed its work on me, and in my mid-40s now I have settled comfortably into the realization that something in me loves religion, sees the good in faith and finds life empty without it. Belief won’t let me go, and I’ve stopped fighting it. The hound can have me.

But that doesn’t mean that I don’t struggle to maintain a daily relationship with God. Try as I might to remember my daily prayers, they are often lost in the crush of family and professional obligations, drowned by my pleasures and desires, pushed out by my hobbies and my passions. Not so while I was traveling in the Muslim world, and the voice of God sang to me through the loudspeakers all through the day, reminding me of God’s presence in my life and of my obligations to him. Not so in this beautiful religion that I have glimpsed previously only through the sheen of Western prejudice, and will set out to understand more deeply in the weeks and months following my visit to Jordan.

I still attend to the Catholic faith of my own father; if anything, my experience in the Muslim world has drawn me closer to it. And I am glad to be back in my familiar spaces, among my family and friends, and enjoying the American comforts to which I have grown accustomed. But sometimes still I long for that voice of God singing to me across the landscapes of my hometown, over the roofs of coffee shops and car dealerships and elementary schools, calling me to prayer and into his presence in the midst of my endless daily routines.

Show Comments (
3
)
Comments are automatically closed two weeks after an article's initial publication. See our comments policy for more.
William Rydberg
4 years 11 months ago
Even during the early centuries after the Roman persecutions had ended, Church Luminaries like St John Chrysostom, Patriarch of Constantinople delivered sermons about the perils of excess, of horse racing on Sundays, etc... because doing such things got in the way of coming to know the One True God, in Trinity. Reading those Sermons (yes many are still preserved) leaves one with the sense that it was every individuals responsibility to adhere through faith to the GOSPEL. With the coming of mohammedism, the shift was that the government (rulers) upended the central importance of voluntary largely interior submission to corporate largely external, observable submission to a set of radically scaled back putative religious duties, then took the largely heretical persian notions of Christ (semi-divine) and picked up on the Rabbinical Judaism attacks on St Paul's writings... Using these pre-existing heretical errors about Jesus-God come in the flesh as a blunt instrument, they (mohammedans) first denied that Christ himself established his Church, denied Jesus divinity, and tried to obscure the highest truth revealed by Jesus: God is Trinity, God is Father, God is Love and that the Holy Trinity is genuinely interested in man that He created in his own image. That one day, soon, some men and women, in Christ, will share in the Divine Nature and will be "as gods", even judging Angels... Feast of the Chair of Peter, 2016.
Beth Cioffoletti
4 years 11 months ago
A beautifully written piece. Thank you. When I was a child, in my hometown, I could hear the Church bells from my bedroom window. Every hour it would strike, even throughout the night. Just before Mass it would ring. I even remember an Angelus toll at noon. When I went to the Catholic grade school (next to the Church) if we were on the playground during the Angelus ringing at noon we would stop our play and the nuns would genuflect and pray.
Elizabeth Phillipson
4 years 11 months ago
In 2011 I spent time in the Holy Land with the Presbyterian Church in Canada. Our first night was spent in Bethlehem, after a eye-opening entry into Palestine through the check point. I woke at 4 a.m. to the sound of the call to prayer from the mosque very nearby. I wondered if I could ever get used to be wakened so early every morning! Then, in a few more hours, I was woken again, this time by church bells. I grew to absolutely love both calls to prayer, and had the same experience in our Syrian Catholic guest home in Jerusalem, again close to both mosque and church. The experience every day was so spiritual, I will never forget the feeling that came over me every day. I work in a church office in Canada, and the best part of my day is leaving my desk, going down the hall, and entering the sanctuary of St. Andrew's Church Ottawa, feeling myself summoned to daily prayer, back on 'home turf'. My life was changed for the good, definitely!

This article also appeared in print, under the headline “Centered by Prayer ,” in the February 29, 2016, issue.

James M. Lang is a professor of English and director of the Center for Teaching Excellence at Assumption College. His most recent book is "Cheating Lessons: Learning From Academic Dishonesty" (Harvard Univ. Press). Funding for the issue in which this article appeared was provided by a grant from the Catholic Communication Campaign. The opinion of the author is his own and does not reflect the opinion of the CCC.