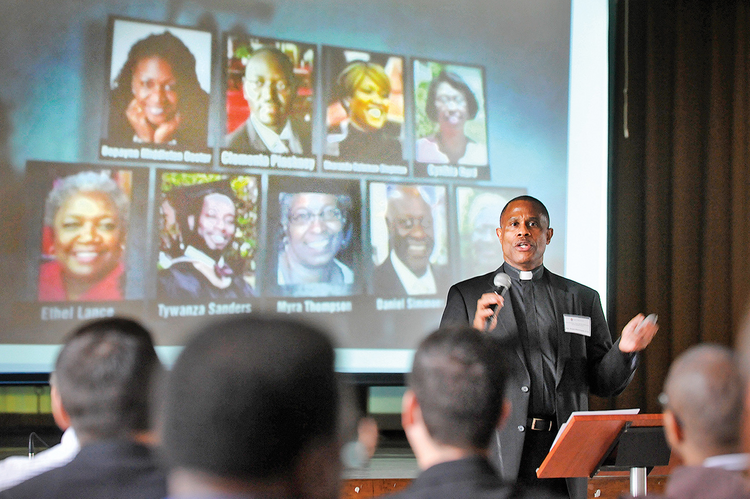 A seismic shift in demographics in both society and the U.S. Catholic Church in the coming decades will create a church that is far less white, Father Bryan Massingale told a New Orleans audience Nov. 6.

The church will be unprepared to deal with that reality, he continued, unless it addresses "the ongoing struggle for racial equality."

Father Massingale made the comments in an address to priests, seminarians and other officials of the New Orleans Archdiocese.

The author of "Racial Justice and the Catholic Church" and professor of ethics and theology at Marquette University in Milwaukee, the priest said the church must become "a proactive agent for racial justice" if it is to "remain viable and relevant in the 21st century."

He said the issues of racism and racial justice are not spoken of frequently by priests because the topics are so sensitive.

"When we get together, there is a tendency for silence," Father Massingale said. "We don't dare say anything because we don't want to say something wrong or make someone upset. We don't want to go there. Most of all, as priests, we want to be liked. Your parish is your family. You don't want to alienate people. So, you'd rather keep silent than run that risk."

Just as the topic of sexuality is sensitive, discussions about race "become emotional and visceral." In his years of teaching a course on racial justice at Marquette, Father Massingale said it's not uncommon for "students' eyes to glaze over. They can't take any more in."

"We have to acknowledge those emotions so we're not paralyzed or overwhelmed by it," he said.

While the church now is represented by a mix of 60 percent whites and 40 percent Latino, African-American and other ethnic groups, census figures indicate that by 2043, whites will no longer be the majority race in the U.S., he said.

"We don't have diversity in the church," Father Massingale said. "We are a diverse church (already). The landscape of both the church and society is being significantly and dramatically altered. If we are going to be Catholic, our future can only be a brown one. The church is browning. It's inexorable."

Those statistics have "wide-ranging implications" for the church's formation and evangelization programs.

The massacre of nine African-American worshippers in a Charleston, South Carolina, church is just the most recent reminder of the racial divide in America, he said. There is other "subtle racism" exposed when anonymous comments are posted online in response to news stories involving race and ethnicity, he said.

He showed a news and photo feed from The Associated Press after Hurricane Katrina that showed two pictures of people wading in chest-deep water with supplies. The photo of black individuals identified them as looters; the photo of whites described them as "finding bread and soda from a local grocery store."

"They were engaged in identical actions at the same time and place," Father Massingale said. "Neither paid for anything. One was described as 'looting' and the other as 'finding.' It simply went with what we know about each other. At times of crisis, we respond with what we know."

The recent, high-profile police shootings of African-American men prompted one news commentator to write about a heart-to-heart talk African-American parents need to have with their children. "And it's not about 'the birds and the bees,'" Father Massingale said.

The story goes on: "This is about you coming home alive. While we know you are just a child, to some people you are an adult, an adult who is dangerous and guilty of something, even if you've done nothing wrong. So, if a policeman stops you for whatever reason, don't pull out your phone, don't run, just put your hands up in the air. No, it is not right, and we don't have the luxury of being right. We just want you home alive."

Father Massingale said his white seminarian classmates were unconvinced of the reality of racial discrimination until they went with him to a local bar and the bartender refused to take their drink orders.

"You're not welcome as long as he's with you," the bartender said.

"That was when their eyes were opened—when it affected someone they knew and they could enter into that sense of solidarity, that firm, persevering commitment to the common good," Father Massingale said. "They had never seen it until it affected them through me."

"Racism is a soul sickness," he added. "It's a profound warping of the human spirit that enables us to create or tolerate callousness or indifference toward each other. Racism is a soul sickness that says some lives are worth less than others and some are beyond our concern. We are called to lament, to grieve, to mourn, to be aware, because that's what leads to racial conversion."

Catholics can confront the sin of racism in a pastoral way by first recognizing their own "fears, blindness and need for education, growth and healing," he said. "But there can't be fire in the pew if there's ice in the pulpit.

"We have to be people of deep prayer or else we cannot engage in this work," he said. "We can only do it with the strength and power of the Gospel."

There is hope that things can change, Father Massingale said.

"Social life is made by human beings," he said. "The society we live in is the result of human choices and decisions. This means that human beings can change thing. There is nothing necessary or fated about racial hierarchies or white racial privilege. They are the result of human agency; it does not have to be so. What human break, divide and separate, we can—with God's help—heal, unite and restore."

Catholic News Service
Show Comments (
1
)
Comments are automatically closed two weeks after an article's initial publication. See our comments policy for more.
Vincent Gaglione
5 years 4 months ago
Powerful commentary, perhaps worthy of a USCCB meeting or two! On too many allegedly "controversial" issues, including racism, I think the lack of discussion in Catholic pulpits of these issues has less to do with whether or not the pastor will be liked as it is that it may cause a drop in envelopes in the baskets at Mass. Finally, on a tangent, ss a retired public school teacher, articles like this one always make me question why exactly do we brag about the academic excellence of Catholic education but can't brag about the moral excellence that we inculcate on "controversial" issues like these!