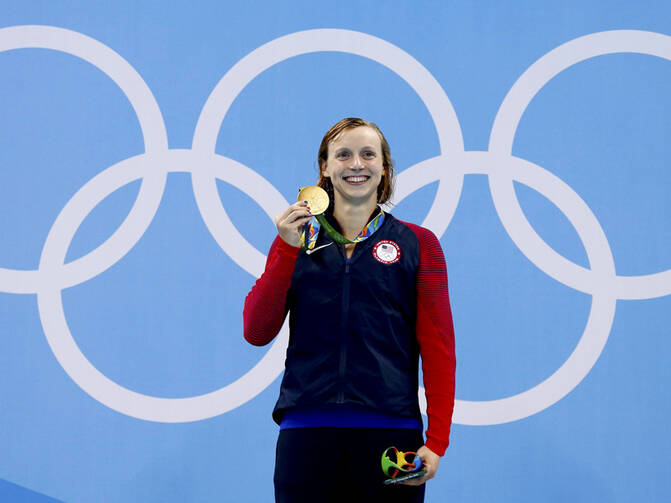 Katie Ledecky has no obvious physiological advantages as a swimmer.

At 6 feet, the second-time Olympian is not extraordinarily tall compared with her peers. She has no long torso, no wide wingspan like Michael Phelps.

What she has, as The Washington Post recently pointed out, is "a strong core."

And that's not just her muscular middle, but also the foundation of her tight family and strong Catholic faith.

“My Catholic faith is very important to me. It always has been and it always will be. It is part of who I am and I feel comfortable practicing my faith," she told the Catholic Standard.

Ledecky surprised the world when—at age 15 and as the youngest member of the U.S. Olympic team—she won the gold medal in the 800-meter freestyle at the 2012 Summer Olympics in London, setting a new U.S. record.

And she'll say a prayer before each event, according to the Catholic Standard.

"I do say a prayer—or two—before any race. The Hail Mary is a beautiful prayer and I find that it calms me,” she said.

Ledecky attended Catholic schools through high school, first at Little Flower School, then Stone Ridge School of the Sacred Heart, both in Bethesda, Md. Her godfather Fr. Jim Shea, S.J., and several Stone Ridge teachers cheered her on at the Olympic Trials this year, and many more former classmates and teachers sent supportive messages, according to the Catholic Standard.

She had returned their support after the London Games, joining her high school swim team and visiting the Immaculate Heart of Mary sisters in Bethesda, bringing them brownies and letting them wear her medal, according to Crux.

"I feel that I have very special people in my life and, because of that, I feel very fortunate," she said.