Cardinal Peter Turkson: The earth is at risk, something must be done

Cardinal Peter Turkson: The earth is at risk, something must be done 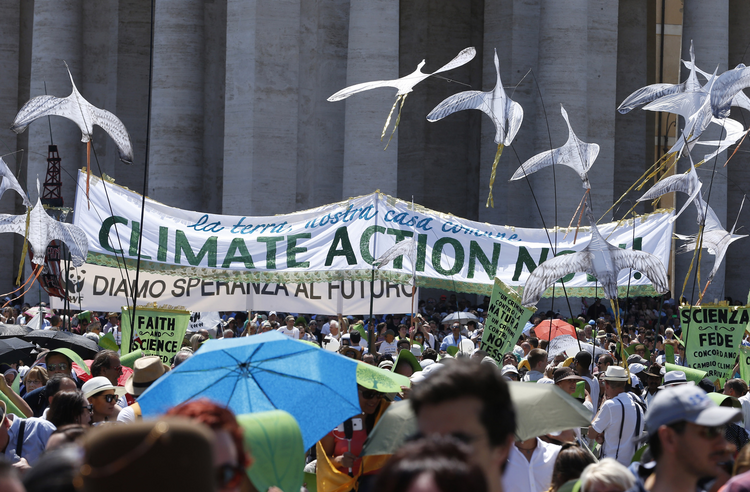 As the Vatican makes a concerted effort to influence the outcome of the U.N. Climate Change Conference in Paris later this month, one of the leading Vatican authorities on Pope Francis’ encyclical, “Laudato Si,’” told America in an exclusive interview on Nov. 3 that the success of the meeting of world leaders is not solely in the hands of the politicians.

“I would look way beyond politicians and political leaders,” said Cardinal Peter Turkson, president of the Pontifical Council for Justice and Peace. “I would look at civil society groups and look at business groups for the success of this upcoming summit.”

The popular cardinal from Ghana delivered the keynote address, “Laudato si’ from Silicon Valley to Paris,” at a two-day conference at Santa Clara University that brought together leaders in religion, politics, business and science to engage in dialogue about the ecological vision of Pope Francis.

Cardinal Turkson said the measure of success for the Paris summit, which begins Nov. 30, is “the extent to which people and groups are coming on board.” He noted there is substantial public awareness about “what is at stake.”

“It is not just now a matter of politicians and political leaders and policy makers meeting to decide anything,” he explained. “But the awareness is now very well shared that the earth is at risk, and there is something that needs to be done to ensure that life on this earth is sustainable.”

On Oct. 26, the presidents of several regional conferences of Catholic bishops from across the world made an appeal to the political leaders who will meet in Paris for “courageous and imaginative political leadership” that will result in a “fair, legally binding and truly transformational climate agreement.”

Asked whether he believes these political leaders have the requisite courage and imagination to come to an agreement, Cardinal Turkson shifted attention to the important role of businesses in addressing climate change.

“The politicians make the decision, but the implementation comes to business and how they evaluate the outcome of decisions,” he explained. “How is that going to affect their business? Is it going to promote it positively or no?”

The appeal from church leaders offered 10 specific policy proposals, including putting “an end to the fossil fuel era, phasing out fossil fuel emissions, including emissions from military, aviation and shipping.”

Asked about U.S. responsibility for military emissions, Cardinal Turkson said the concern is basically about pollution from explosions and what is released into the atmosphere. He added that the factories that produce military hardware “may also contribute to the problem.”

He acknowledged that the United States has helped broker peace in many places, and he wishes the country would “strengthen that.”

“Every now and then, your politics and balance of power and influence around the world come into play,” the cardinal said. “But if all of these efforts will be balanced by a concern for peace, by a concern for promoting coexistence, harmony and the well-being of people, it would be a great thing.”

In advance of his talk on Tuesday, Cardinal Turkson also offered brief comments and took questions at a press conference at the Jesuit university located 40 miles south of San Francisco.

At the briefing, America asked Cardinal Turkson about Catholic institutions that have investments in fossil fuel companies and whether—in light of the urgency of the situation—traditional shareholder advocacy is still an effective strategy for change, or whether he would favor divestment.

Cardinal Turkson said the Vatican has no official stance on divestment, but he has read about religious congregations in the United States that have divested from the fossil fuel industry.

“That probably explains one of the tensions, one of the difficulties we had, even before the encyclical was published,” he said. “We got a lot of communication mail from businesses over here [in the United States], knowing that the publication of the encyclical was certainly going to have a negative impact on coal mining.”

He mentioned Peabody Energy, the world’s largest private-sector coal company, as one of several groups who communicated their concerns to the Vatican.

Initially, the shift to renewable sources “appears to be something that will bring a lot of losses to business,” the cardinal said. “But in fact those who have tried already talk about better investments, better proceeds in their shift to renewable energies.”

Cardinal Turkson acknowledged diverse reactions to the encyclical, and he emphasized that Pope Francis has called for dialogue and several times used the image of a polyhedron “to simply say when we are dealing with an issue that involves all of us.”

We need people coming from “different points of view,” he said. He expects religion, science, business and others to contribute.

“It is a question of inviting all stakeholders to the table to see we are having a problem” with the sustainability of the earth, he said. “Let’s think together.”

He said the Pope Francis’ invitation to dialogue has been “well received.”

“Cardinal Dolan from New York tells me about 12 businessmen who want to take the pope on his word and come to Rome to engage the pope in dialogue about what he has suggested,” said Cardinal Turkson. He added that the Pontifical University of the Holy Cross in Rome will host an event in February that will bring business persons from around the world “to come together to see if we can find a solution to a very common problem about our earth, our common home.”

In writing the encyclical, Pope Francis “inserted himself in a whole long tradition of social concern” about the environment and the poor, explained Cardinal Turkson.

At the same time, he said, Pope Francis has admitted that one of the “difficulties” of the encyclical was about “how to evaluate” the scientific evidence related to climate change. For the encyclical, according to Cardinal Turkson, the Holy Father relied on U.N. reports produced by over 800 scientists.

Pope Francis “does appeal to science but he appeals to science essentially as a pastor, not as a scientist,” the cardinal explained. “It is not to say the last word or to become an arbiter of the fruit of scientific research, but to demonstrate the fact that the earth is suffering some kind of abusive treatment and needs to be paid attention to.”

Asked about the role of Silicon Valley in the global conversation about climate change, Cardinal Turkson said that area has become “an icon for technological growth and development.” His presence here for the talk, he said, is based on the belief that “there is a lot that Silicon Valley can do to help the world leaders as they go to Paris.”

On the question of whether the tech industry has thought enough about the environmental costs of its goods, the cardinal said it is difficult to know what is adequate.

“What I can say, however, is that there is the awareness being created in several business schools and several business centers that concern should not be so much about how much people make but what impact they make,” he said.

At several occasions during the press conference, Cardinal Turkson returned to this particular line from “Laudato Si’”: “What kind of world do we want to leave to those who come after us, to children who are now growing up?”

“And with that passionate appeal,” he said, Pope Francis invites us to seriously look at what he calls integral ecology, “the inseparability between the concern for the earth and concern for the poor.”