A Call to Virtue: Living the Gospel in the land of liberty 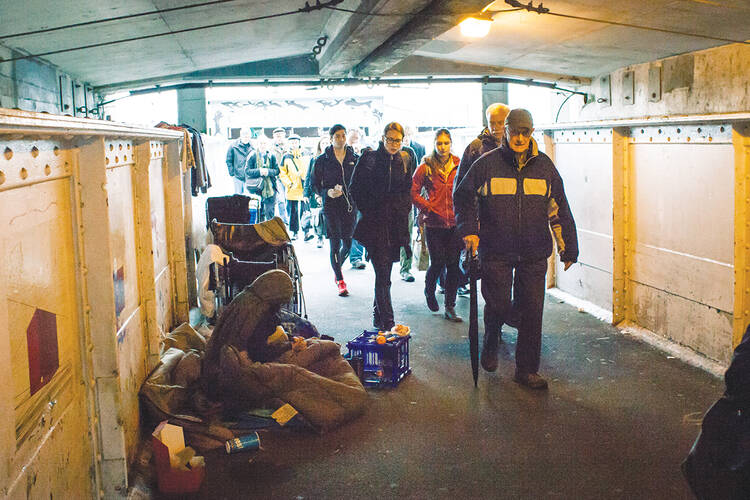 Pope Francis has declared that the joy of the Gospel can help the world to overcome the globalization of indifference to others. Undoubtedly, he will bring this message when he visits the United States. But when he does, he will face a society in thrall to a different idea—that of the unalienable rights to life, liberty and the pursuit of happiness. The urgent core of Francis’ message, which is the message of Jesus’ Sermon on the Mount, challenges this American idea by proclaiming that the path to happiness lies not solely or mainly through the defense of rights but through the exercise of virtues, most notably justice and charity.

Pope Francis sees a crisis of the human spirit in our time, characterized by our inability to hear the suffering of others. This is a crisis not of material want, of the scarcity of material goods as taught by modern economics, but of morals. We suffer a poverty of the spirit in the midst of material plenty, a failure to live properly in an age of unprecedented material affluence.

This is an idea that is foreign to the ideology of rights that dominates American ideological discourse. In the United States, we learn that the route to happiness lies in the rights of the individual. By throwing off the yoke of King George III, by unleashing the individual pursuit of happiness, early Americans believed they would achieve that happiness. Most important, they believed that they would find happiness as individuals, each endowed by the creator with individual rights.

There is, no doubt, grandeur in this idea. As children of God, individuals have rights to be free of persecution, to be treated as ends and not means, as Immanuel Kant put it. The dignity of man requires the rights of man, as Thomas Paine declared.

Yet from the point of view of the Gospels, such rights are only part of the story, only one facet of our humanity. The Beatitudes, regarded by Pope Francis as key to the Gospel truth, are actually not at all about individual rights but about virtues, meaning the right path to the right kind of life. The Sermon on the Mount is not a defense of the individual but a call to humility, love and justice.

In modern terms, we would say that rights must be balanced by responsibilities. Kant said that the rights of individuals must be combined with duties, as guided by the categorical imperative. According to Kant, we have the duty to behave according to those maxims, and only those maxims, which can be made into universal laws.

Yet Jesus, and the ancient Greek philosophers, meant something different from responsibilities or duties in the way Kant understood them. It is useful for us to consider Aristotle’s views, for through St. Thomas Aquinas Aristotle’s vision of the good life was harmonized with Jesus’ teachings on the mount. For Aristotle, the issue was not the balancing of individual rights and responsibilities, as we would put it today, but the fact that we live our lives not only as individuals but also as members of society.

The Right Kind of Living

How strange to the American eye and ear is Aristotle’s declaration in the opening pages of The Politics that “the state is by nature clearly prior to the family and to the individual, since the whole is of necessity prior to the part.” Aristotle does not mean that the state can willfully crush the individual, but rather that the individual finds meaning in life, and the path to happiness, as a citizen of the polis, the state. In a phrase that reverberates powerfully still today, Aristotle noted that “man is a social animal.”

For Aristotle and for Jesus, as in the Beatitudes, the path to happiness is through the exercise of virtue, which means the right kind of living by each individual as a member of society. Aristotle’s message is that happiness (eudaimonia) is achieved through the practice and cultivation of virtues, including moderation in the pursuit of material wealth and the exercise of good citizenship. Jesus’ message is that happiness, and indeed salvation, cannot be found through material goods, or through the pursuit of happiness as consumers and moneychangers, but through the virtues of humility and justice, including most importantly “feeding the least among you.”

The church teaches that an individual’s happiness can be achieved only in solidarity with the community, in the individual’s “firm and persevering determination to commit oneself to the common good,” in the words of Pope John Paul II. As the church’s social doctrine declares, “The human person cannot find fulfillment in himself, that is, apart from the fact that he exists ‘with’ others and ‘for’ others”—a fact supported by psychological studies confirming that the act of giving is a powerful spur to an individual’s sense of well-being.

Can such rarefied ideas really help us to face the challenges of our own time? Can they really help to illuminate Pope Francis’ mission to overcome the globalization of indifference? I believe they can. For while the United States is a society of many glories, including the protection of the individual from state tyranny and the achievement of material well-being beyond any prior period of history, it is a society that has been wounded, even gravely, by its flawed and limited vision of humanity.

In current political discourse in the United States, the unalienable rights of the individual have been transmuted into the modern doctrine of libertarianism. This doctrine not only puts individual rights on a pedestal above all others but also actively denies any claim by society to hold individuals to account for their behavior toward others, other than to respect their liberty. In today’s America, the very idea of virtue has been privatized, individualized and increasingly commercialized. Each individual is at liberty to define virtue as he or she sees fit.

The results are disturbing. Trust between Americans is waning, as is recorded each year in survey evidence. A pall of corruption hangs over government, banking and other parts of the economy, even the health care sector. Americans are richer but no happier. Yet even as the United States has become more unequal in income and wealth than at any other time in its modern history, libertarians argue that the widening gulf between rich and poor gives no cause for any policy response. In the name of individual rights, the poor are left to suffer and the super-rich are excused from the requirements of virtue and common decency.

It is a long, fascinating and somewhat mysterious story how the American defense of the individual against tyranny in 1776 became the defense of the individual against demands of social justice and the recognition that virtues like compassion and moderation are the underpinnings of happiness. Perhaps in America’s highly diverse society, the only point of agreement across the numerous religions and cultures was the right to be left alone. Perhaps America’s remarkable commercial achievements meant that the norms of the marketplace—especially consumer choice—would eventually become the deep norms of society itself. Perhaps the advertisers and “merchants of persuasion” in public relations successfully convinced Americans that happiness would be found in one more purchase and one more possession.

Pope Francis is telling the world, and the world is listening, that the path from indifference to the suffering of others can be found through the reinvigoration of the Gospel virtues. This, I believe, is a compelling message, though one that is very strange indeed to the modern, and especially American, psyche. Americans might rather expect a call to legal responsibilities—“You must pay your taxes”—than a call to virtues. Yes, they will tend to dismiss such claims of social responsibility (“It’s my right to keep my money, since I earned it”), but at least they are familiar with the language of rights and responsibilities.

Yet the call to virtues is deeper and ultimately more compelling. Pope Francis is not coming as a scold but as a guide to help us find a solution to the paradox of the poverty of the spirit in the rising sea of affluence. He is not speaking the language of duties and responsibilities but of human meaning. He is not rejecting the libertarian defense of human dignity but saying that dignity is found not only through individual rights and free markets but from within, by each person pursuing the virtues of charity, justice and compassion in solidarity with the common good. This, after all, is the message of hope that brought the multitudes to hear Jesus preach.

As a macroeconomist, I have tried to put the challenge of compassion into the hard financial terms of the national income accounts. For 20 years I have tried to work up the balance sheet of social justice, so to speak, in order to measure the scale of investments that society needs to make in order to overcome extreme poverty; control epidemic diseases likes AIDS, tuberculosis, malaria and Ebola; and convert our energy systems from climate-changing fossil fuels to safe, low-carbon energy sources like solar, wind, geothermal and hydroelectric power. The paradox that I have found time and again is that for a tiny investment of material goods—perhaps 2 percent to 3 percent per year of our global income—we could mobilize our technological excellence to end the scourges of extreme poverty, disease and environmental degradation that cause great global suffering and that in fact threaten our very survival. Solutions to our global material problems, whether climate change or epidemic control, are within our grasp, but only if we try.

We face, therefore, a moral crisis, not a material crisis. We face a problem not of means but of ends. As Aristotle might have said, we have the techne (the technological know-how) but not yet the phronesis (the moral wisdom) to choose survival over death. We are trapped by an indifference that ironically has been magnified by America’s exaggerated defense of liberty at the expense of virtue. Words do matter; and the Gospel teachings, like the teachings of Aristotle, Buddha and Confucius, about the path to happiness through compassion can become our guideposts back to safety.

Pope Francis will come to the United States and the United Nations in New York on the occasion of the 70th anniversary of the United Nations, and at the moment when the world’s 193 governments are resolved to take a step in solidarity toward a better world. On Sept. 25, Pope Francis will speak to the world leaders—most likely the largest number of assembled heads of state and government in history—as these leaders deliberate to adopt new Sustainable Development Goals for the coming generation. These goals will be a new worldwide commitment to build a world that aims to harmonize the pursuit of economic prosperity with the commitments to social inclusion and environmental sustainability.

The S.D.G.’s can become a beacon for policy makers, civil society activists, scientists, business people and especially young people to infuse commitments of social justice and environmental sanity back into our politics and daily lives. Pope Francis’ message will help provide a universal language of virtue and happiness for the goals to be adopted by the member states of the United Nations. I believe that with such encouragement, the United States and the world can be stirred to choose a better course towards security, human dignity and well-being in the coming generation.