Who's Next?: More questions about the next pope 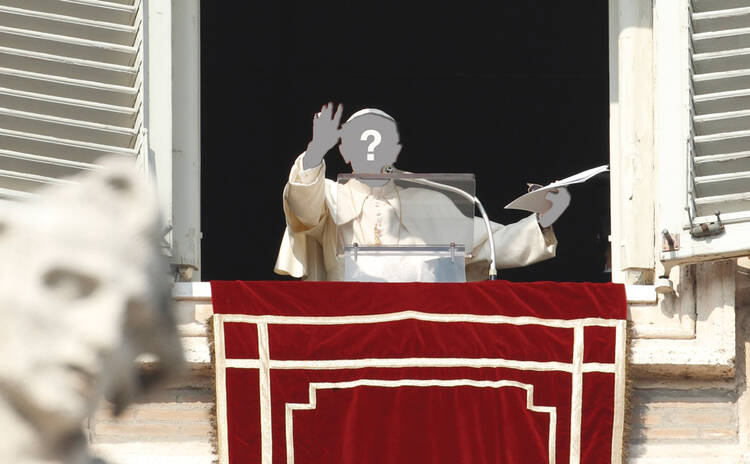 It should be remembered that prior to the death of Pope John Paul II, no one in the media predicted the election of Cardinal Ratzinger. His name surfaced prominently only after Pope John Paul II’s death. As a result, prophets should be modest in their projections. It is better to speak of the qualities we might see in the next pope; then, at least, one has a chance of being partially right.

Age. The next pope will probably be a cardinal between the ages of 63 and 73 who speaks Italian and English and reflects Pope Benedict’s and Pope John Paul’s positions (liberal on social justice and peace; traditional in church teaching and practice; and ecumenical but convinced the church has the truth) but has a very different personality from either man.

Prior to the 2005 conclave, I predicted the cardinals would choose someone between 62 and 72 years of age. I was wrong. Of the nine popes who reigned in the 20th century (beginning with Pope Leo XIII), their average age at the time of election was 65 years, with Pope John XXIII the oldest at 76 and Pope John Paul II the youngest at 58. The average age of the current group of cardinals is 72. Benedict was 78 when elected, older than all but three popes elected by cardinals through the centuries. It is unlikely the cardinals will choose another old cardinal.

Positions. There is not a great amount of difference between Pope Benedict and Pope John Paul on the important issues facing the church, although Benedict may be a little more conservative than John Paul on interreligious dialogue, ecumenism and liturgy and a little less activist in justice and peace issues. John Paul and Benedict have appointed all the current cardinals under the age of 80 who will elect Pope Benedict’s successor. In appointing cardinals, Pope John Paul II and Pope Benedict have done what anyone would do if they were pope—they have appointed men who agree with them on the major issues that face the church. The next conclave, as a result, will not elect someone who will reject the legacy of Pope John Paul or Pope Benedict. With the next pope, we will see more continuity than change.

As a result, there will be more continuity than change in church doctrine and policy. That means someone who is liberal on political and economic issues but traditional on sexual morality and internal church issues, someone who supports ecumenical and interreligious dialogue but is convinced the church has the truth. In short, I do not support the “pendulum” theory when it comes to doctrine, but it may be true on personality and governance style (see below).

Personality. While there will be continuity in policy, there will be a change in personality; cloning is against church teaching. There is no one with a personality like Pope John Paul’s in the College of Cardinals, with a background as a Polish actor, intellectual and teacher who grew up under Nazism and Communism. Nor is there anyone like Pope Benedict, with his background as a German theologian and prefect of the Congregation for the Doctrine of the Faith, who grew up in Germany during the Second World War.

Less Centralization? Prior to the 2005 conclave, I predicted that when the cardinals gathered in conclave, they would praise Pope John Paul “of happy memory,” but there might be a backlash against the Roman Curia, whose power had grown during his papacy. Even the most conservative cardinal, I argued, wanted to run his diocese the way he thinks best without interference from Rome. The cardinals may therefore look, I argued, for someone who would support more decentralization of decision making in the church—more power to bishops and bishops’ conferences. Considering the election of Cardinal Ratzinger, who played a major role in centralizing power in Rome under Pope John Paul’s papacy, I was obviously wrong. On the other hand, there have been complaints about the poor administration of the Roman Curia under Benedict—although his secretary of state, Cardinal Tarcisio Bertone, has borne the brunt of that criticism. As a result, some argue that the next pope should have greater administrative skills than his immediate predecessors.

A Curial Cardinal? Two thirds of the cardinals are diocesan bishops who are running local churches. In the past, I argued that they would want someone who knows what it is like to be a local bishop, not simply a Vatican bureaucrat. Many cardinals working in the curia, like Cardinal Ratzinger, had diocesan experience before they came to Rome, and some Vatican officials left the curia and became cardinals as archbishops of local churches. Cardinals with both types of experience have an advantage. Of the popes elected during the 20th century, only Pope Pius XII had no diocesan experience, and only three (Pope Pius X, Pope John Paul I and Pope John Paul II) never worked in the Vatican. The remaining five had worked in the curia but were leaders of archdioceses when elected pope.

Almost zero. First, although a number of the American cardinals are fluent in Spanish, Americans are not great linguists. Second, and most important, the cardinals would worry about how the election of an American would be perceived around the world, especially in the third world and Muslim nations. Many in the third world might suspect that the Central Intelligence Agency fixed the election or Wall Street bought it. Muslims might fear that an American pope was going to be a chaplain for the White House. Finally, through the centuries the church has tried to keep the papacy out of the hands of the reigning superpower, whether that was the Holy Roman Empire, France or Spain. When France captured the papacy, it moved it to Avignon in 1309, where it stayed until 1377.

I am not Jimmy the Greek, nor do I gamble. If you want to know what a bookie thinks, see paddypower.com on who might succeed Benedict.

Former House Speaker Tip O’Neil was correct: “All politics is local,” even in the Catholic Church.

The cardinals from the third world have people who are starving and suffering from the negative impact of the globalization of the economy. They will want a pope who will speak out for social justice and forgiveness of third-world debt and be willing to stand up to the American superpower. Cardinals from Africa and Asia are confronted by growing Islamic fundamentalism. They will want a pope who understands Islam and will not use inflammatory words like “crusade,” as did President George W. Bush. They want a pope who, like John Paul, will support dialogue with Muslims but at the same time stand up for the rights of Catholics.

On the other hand, in Latin America there are few Muslims. The concern there is the evangelicals and Pentecostals who are “stealing their sheep.”

In North America and Europe, the cardinals will want a pope who will continue the fight of Pope Benedict against secularism and relativism but also support ecumenical dialogue with Protestants and Jews. Given the growing alienation of educated women, they would also want someone who projects an understanding of women’s concerns. The last thing they would want, for example, is a pope who would decide to get rid of altar girls. The American cardinals would also want someone who understands and supports what they are doing to deal with the sexual abuse crisis. Europeans are concerned about the growing number of Muslims in Europe.

The principal challenge of the church and the new pope is how to preach the Gospel in a way that is understandable and attractive to people in the 21st century, especially young people. St. Augustine and St. Thomas Aquinas did this in their time by using the best thinking of their times. For Augustine, that meant using neo-Platonism, and for Aquinas it meant using Aristotle. Our task today is not just to quote these saints but to imitate them by using the best thought of our day to explain Christianity to our generation. To do this requires giving freedom to theologians and scholars to develop new ways of talking about the faith. This sometimes frightens people. Remember, Aquinas’ writings were burned by the bishop of Paris.

In the past two conclaves, the electors voted for the smartest man in the room. Perhaps, this time, they will vote for the man who will listen to all the other smart people in the church.

@ThomasReeseSJ
Show Comments (
3
)
Comments are automatically closed two weeks after an article's initial publication. See our comments policy for more.
David Pasinski
9 years 4 months ago
As usual, balanced and clear analysis... and I love the last line! Always hard for us "US 6%ers" to wrap our heads around the other issues facing the Church. Cdl. Dolan's remarks a few months ago on the "martyrdom" of Christians- while perhaps flamboyant or even exaggerated -- lie beyond our daily news. Delay the Conclave six months. Send the cardinals - anonymously - around the world to observe other cultures and problems. Have local diocesan listening session - no talk backs from hierarchy. Bring bishops and cardinals together in open regional meetings when laity can observe sessions.. Then send the cardinals on week's long confab with thologians and other religious leaders someplace besides Rome, then a wek among themselves at the beach, and a week of silent retreat at some Cisterican monasteries... and then may the Conclave begin!
Mary Sweeney
9 years 4 months ago
I think a question was inadvertently omitted prior to "Almost zero." which appears at the beginning of the 8th paragraph from the bottom. I think the question should have been something on the order of "An American Pope?".
Mister Heche
9 years 4 months ago
Below is an excerpt from the poem "The Roman Tryptych: Meditations" by Blessed John Paul II. In the excerpt, John Paul offers a powerful meditation on the conclave and on the role of the Sistine Chapel in the choosing of the pope: http://allhands-ondeck.blogspot.com/2013/03/the-conclave-roman-tryptych-meditations.html