Signs of Life: The Catholic voice against the death penalty is growing stronger. 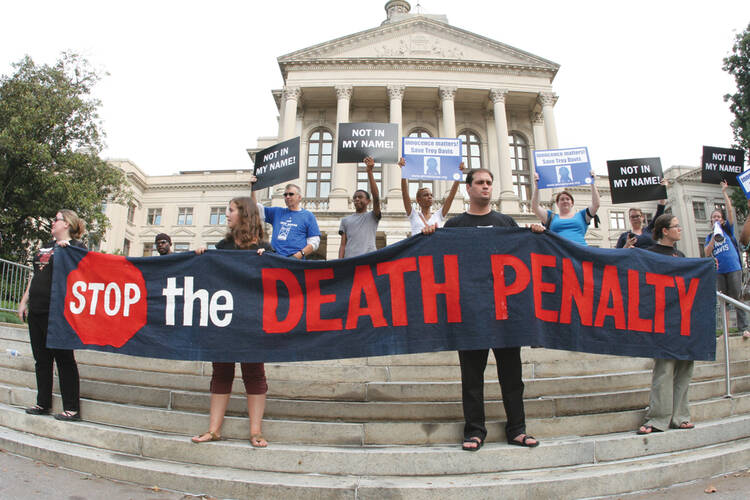 Can it possibly be happening? After years of relentless dialogue on the death penalty among Catholics in the United States, are we at last beginning to see signs that Catholics are becoming a significant moral force in efforts to abolish state-sanctioned death? Yes! I see it and rejoice.

For the last 34 years I have been engaged in this dialogue—ever since I walked out of Louisiana’s killing chamber in the early morning hours of April 5, 1984, after seeing a man strapped down and killed in front of my eyes.

Now, at last, there are signs of hope. As support for the death penalty has steadily declined in the United States in recent years, Catholic support has dropped even more significantly. According to the Pew Research Center, 78 percent of Americans—and a higher proportion of Catholics, 80 percent—supported the death penalty in 1996. By 2011, however, those numbers had fallen to 62 percent and 59 percent, respectively. Now Catholics support the death penalty at a lower rate than the general population.

In 2005 the pollster John Zogby reported a comparable shift in Catholic opinion toward the death penalty, but over a shorter period of time. But this poll also revealed another bright and shining fact: Catholics who regularly attend Mass support the death penalty less than those who seldom attend.

For a long time it was the other way around; going to church seemed to reaffirm Catholics in their support for the death penalty. In the late 1980s, it was anguishing to learn from polls at that time, people who attended Christian churches, including Catholics, were more likely than other Americans to support the death penalty. As I crisscrossed the nation giving talks, all I heard in audience after audience was, “An eye for an eye.” I wondered: What had happened to Jesus’ Gospel challenge to love our enemies and to forgive those who hurt us? Had we Catholics become so acculturated that we were virtually indistinguishable from other Americans? Had the salt lost its flavor?

Last October, however, I saw clear evidence of the Catholic transformation on this issue. As Californians considered Proposition 34, which sought to repeal the state’s death penalty and convert the sentences of 727 death row inmates to life imprisonment without parole, I barnstormed Catholic churches across Southern California in favor of the ballot initiative. Even though it ended up being narrowly defeated (48 to 52 percent) in the November election, it was downright refreshing to witness broad Catholic action in support of the proposition. Catholics collected signatures on petitions, staffed tables at shopping centers and helped with phone banks. I cannot help remembering the lonely marches in the 1980s of a straggly few of us out on the road trying our meager best to awaken the public to the need to abolish the death penalty.

Pope Benedict XVI gave a real boost to the hands-on participation of Catholics on this issue in November 2011, when he expressed his hope that a meeting of the Community of Sant’Egidio and their collaborators would “encourage the political and legislative initiatives being promoted in a growing number of countries to eliminate the death penalty….” While Pope Benedict has publicly congratulated the leaders of Mexico and the Philippines for ending the death penalty in their countries, his message for Sant’Egidio was, to my knowledge, his most forthright public statement in opposition to capital punishment.

Pope John Paul II on numerous occasions called for an end to the death penalty. But the statement I cherish most came during his January 1999 visit to St. Louis, Mo., in which he positioned the death penalty side-by-side with the other pro-life issues—so dear to the hearts of Catholics. Having described abortion, euthanasia and assisted suicide as “terrible rejection[s] of God’s gift of life and love,” John Paul II continued: “The new evangelization calls for followers of Christ who are unconditionally pro-life: who will proclaim, celebrate and serve the Gospel of life in every situation. A sign of hope is the increasing recognition that the dignity of human life must never be taken away, even in the case of someone who has done great evil.” Rooted in this conviction, the pope renewed his appeal “for a consensus to end the death penalty, which is both cruel and unnecessary.”

Two years earlier I had traveled to Rome for a personal dialogue with Pope John Paul II about the death penalty. I asked: “Your Holiness, does the Catholic Church uphold the dignity only of innocent life? What about the guilty?” I shared with him that when I am walking to execution with a man—rendered completely defenseless—who says to me, “Please pray God holds up my legs,” I cannot help but ask, Where is the dignity in this death? (I recount this dialogue with John Paul II in my book The Death of Innocents.)

On Holy Thursday 2005, the U.S. Catholic bishops inaugurated the Catholic Campaign to End the Use of the Death Penalty, and we began to see many more bishops at press conferences and legislative hearings in active support of bills to repeal the death penalty.

When Cardinal Roger Mahony gathered more than 1,000 priests of the Archdiocese of Los Angeles to announce that the California bishops strongly supported Proposition 34 and that the death penalty issue would be an integral part of Respect Life Month in October 2012, the priests responded with warm applause.

The Second Vatican Council guided us rightly. Sustained, respectful dialogue—listening to all voices in the church, laity and hierarchy together—is the Gospel way to win over minds and hearts. The gentle art of education and persuasion is always slower and more labor-intensive than juridical edicts handed down from on high. I say thank God for Vatican II, which has schooled us in the art of patient, steady dialogue.

Nothing beats grassroots education and incessant invitations to action. As one example I hold up the Catholic Mobilizing Network, launched in 2008, developed and led by dynamic Catholic laypeople and sponsored by my religious community, the Congregation of St. Joseph. The network’s mission is to collaborate with the U.S. bishops’ Catholic Campaign to End the Use of the Death Penalty. Its Web site (catholicsmobilizing.org) offers ideas for homilies as well as teaching tools for adults and young people to understand the church’s newly developed vigorous opposition to state killing.

What better focus for the Year of Faith than continued dialogue about the dignity of all life, even of those found guilty of committing terrible crimes? We are called to restorative justice and compassion, not retributive, eye-for-an-eye vengeance. On a controversial issue like the death penalty, we hope and strive for understanding and enlightenment. But even more, we pray for the grace St. Bonaventure calls us to desire. He wrote, “Ask for...not light, but the fire that totally inflames and carries us into God.”

I have experienced such a call, and I describe it in the prelude to the spiritual memoir I am now writing, River of Fire:

They killed a man with fire one night, strapped him in a wooden chair

And pumped electricity into his body until he was dead.

His killing was a legal act (because he had killed).

No religious leaders protested his killing that night,

But I was there. I saw it with my own eyes.

And what I saw set my soul on fire, a fire that burns in me still.

Helen Prejean, C.S.J., is the author of Dead Man Walking and The Death of Innocents.

@helenprejean
Show Comments (
4
)
Comments are automatically closed two weeks after an article's initial publication. See our comments policy for more.
john andrechak
9 years 7 months ago
for current times, then benchmark for "Catholic Opposition" to the death penalty, or unjust war, or economic justice, must be for the leadership compared to the effort against gay marriage. I will cede the argument for the time about abortion, but when say the Maine diocese spent a reported 3/4 million, sent DVDs out to every parishioner, appointed parish "captains" to contact every member in an effort to defeat a state initiative legalizing same sex marriage? In effect the hierarchy effort against the unjust war on Iraq or the the execution of convicts in a shameful nothing
Leonard Villa
9 years 6 months ago
There is no doubt that there is sentiment against the death penalty on the papal level and from many clergy and laity. However Catholic teaching is clear in the Catechism that the traditional teaching of the Church provides for the death penalty if this is the only possible way of effectively defending human lives against the unjust aggressor. If, however, non-lethal means are sufficient to defend and protect people's safety from the aggressor, authority will limit itself to such means, as these are more in keeping with the concrete conditions of the common good and more in conformity to the dignity of the human person. Today, in fact, as a consequence of the possibilities which the state has for effectively preventing crime, by rendering one who has committed an offense incapable of doing harm - without definitely taking away from him the possibility of redeeming himself - the cases in which the execution of the offender is an absolute necessity "are very rare, if not practically nonexistent #2267 Clerics won't be making the determination whether non-lethal means are sufficient to protect people's safety from the aggressor and it is certainly not clear that it can be determined a priori that cases where the execution of the offender is an absolute necessity are very rare because that is a question of fact and those conditions can change. It is the government, those in charge of taking care of the common good that must make those determinations which ought to include the notion of deterrence especially if there is a outbreak of murderous behavior taking a community hostage. eg. throwing people onto subway tracks; home invasions with homicides; rapes, car jackings, terrorists, etc. Circumstances can change in a hurry in the world we live in. Reasonable people can disagree and will disagree about whether the circumstances justify the death penalty for certain crimes.
Vince Killoran
9 years 6 months ago
"What ever happened to an eye or an eye?" Jesus did away w/that in the New Testament.
Dudley Sharp
8 years 9 months ago
. 86% Death Penalty Support: Highest Ever - April 2013 http://prodpinnc.blogspot.com/2013/11/86-death-penalty-support-highest-ever.html