Pope Francis: We must “see in the women’s movement the working of the Spirit.” 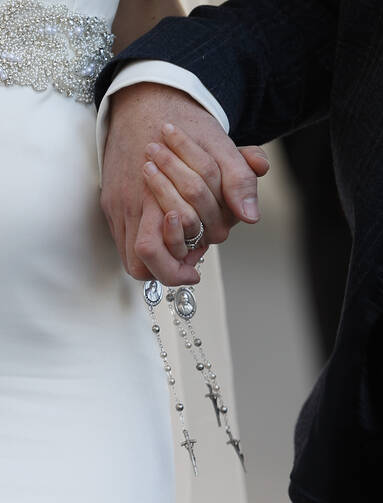 For many people, the Catholic perspective on marriage and family life is a fraught subject. Official statements and, to varying degrees, the work of professional theologians and popular thinkers can seem to fall short of the complex, lived realities and diversity of familial circumstances in the lives of members of the Body of Christ. Too often, we are presented with an idealized depiction of “the Christian family”: the pious nuclear family modeled on the Holy Family.

It is well known that, in this model, those who are divorced, especially if remarried, are left out. However, the ramifications go even further: Limiting the view of the family to this single image means we are left without any meaningful recognition of the familial commitments of single adults. Also missed are the importance of relationships with and responsibilities to our parents, potential siblings and extended families, including in-laws. For many Catholics, especially women, the corollary discussions of gender become particularly painful.

With “Amoris Laetitia,” Pope Francis offers a refreshing departure from this oft-repeated model. While not the bulk of the document, he offers a radical shift in tone regarding gender and feminism. Catholic teaching on gender upholds gender complementarity, which maintains that men and women have distinct roles, even characteristics, grounded in their biological sex. For example, St. John Paul II’s “Mulieris Dignitatem” framed femininity as linked to motherhood, which is necessarily compassionate and nurturing, regardless of whether or not an individual woman is actually a mother. One consequence has been that mainstream feminism has often been viewed as suspect in Catholic circles because it seeks to modify gendered roles in families and is seen at the popular level to be synonymous with sexual liberation. While Pope Francis does not reject complementarity, he begins to move this conversation in a new direction.

Francis clearly states the important contribution of feminism to the world and church. He sharply condemns any view that would blame “women’s emancipation” for the many ways in which women’s bodies are reduced to objects, including surrogacy and commercialization and sexualization in the media. For example, while a variety of voices, both secular and religious, see these kinds of phenomena as instances of cultural change, even decline, due to increased choices and sexual freedom available to women. However, the pope maintains these attitudes are the result of male chauvinism. The commodification of the female body, then, is the result of sexism. In his reaffirmation of the church’s stance against all forms of abuse against women, he writes, “we must…see in the women’s movement the working of the Spirit for a clearer recognition of the dignity and rights of women” (No. 54).

Further, he seems to practically take the teeth out of the content of complementarity. Some forms of secular feminism see gender roles as socially constructed and distinct from biological sex. Francis rejects this view, maintaining the perspective that biological sex and gender are not the same, but are deeply related. Still, when he discusses masculinity and femininity, he is critical of gender stereotypes that would limit people’s way of being in the world. He explains that “masculinity and femininity are not rigid categories” (No. 286). Women have the capacity for leadership, and men have to take on tasks in the family in order to “accommodate the wife’s work schedule.” Here he seems to breaking down any gender roles that place women in the home and men in the world that gender complementarity would seem to support.

These small tonal shifts offer a subtle development in the way the church relates to feminism. Pope Francis notes his appreciation of feminism and, in a key development, identifies it as the work of the Holy Spirit. In so doing, he offers hope and belonging to many women who feel pain about belonging in the church, or who may have one foot out the door.

Megan K. MCabe is a doctoral candidate in theological ethics at Boston College. Her dissertation is on "Sex, Power, and Violence on the College Campus: Rape Culture and Complicity in Evil."

Show Comments (
4
)
Comments are automatically closed two weeks after an article's initial publication. See our comments policy for more.
William Rydberg
6 years 4 months ago
I appreciate this sensitive appraisal of a complex subject.... God bless,
Lisa Weber
6 years 4 months ago
Pope Francis can be depended upon for a view that reflects common sense - a truly wonderful aspect of his papacy! The feminist movement of the 1960's and 70's makes a great deal of sense if it is seen as a type of adolescence for women in the world of work, leadership and the community. The feminist movement faded when it was unable to move on to leadership that collaborates with men. The church has yet to accept the early part of the feminist movement but it could simply leap to collaborative leadership because it has the skills to form leaders, it just fails to form any women leaders.
Sandi Sinor
6 years 4 months ago
The males who run the church define what type of "leadership" roles women may assume in the church. Generally the roles the men permit women to assume are limited to the "nurturing" and "assistants" to the men. Women may teach the children, they may be in charge of various charitable enterprises, even at the global level. But their autonomy is limited by the men.. Women may earn PhDs in theology and teach adults. But the theology that they are allowed to teach is written by men, and must be approved by men. The theology they write may be censored by the men, very often by men who have not even read what the women theologians have written. There is much more, and I am sure that you are well acquainted with all of the ways the men in the church work to stifle, to silence the voices of women in the most important areas of church governance and definition of doctrine. The men hold on tight to their self-granted "authority" as ordained members of the church. By keeping women from the priesthood, they can continue to bar the church's doors against the insights of women, against the "feminine genius" they pretend to admire, from having any influence at all on church teachings and governance. In doing so, they work against true complementarity, twisting the definition of the term to suit their own agenda,. They totally exclude, totally deny, the feminine in God, who made them male AND female in God's image. As long as the institutional church denies a sacrament to women, women will be second-class citizens of the church.
Crystal Watson
6 years 4 months ago
I think that actually what the Pope wrote about women in his exhortation is anything but an example of feminism. He begins by criticizing the secular world for denying women "equal access to dignified work and roles of decision-making", while the Pope stands in the way of women having those very things in the church. He goes on to describe women and their roles in JPII terms of "feminine genius" and complementarianism. And then he drops the hammer on contraception, abortion, and IVF. Not feminist.