Arguments With God: The spiritual side of two Broadway revivals 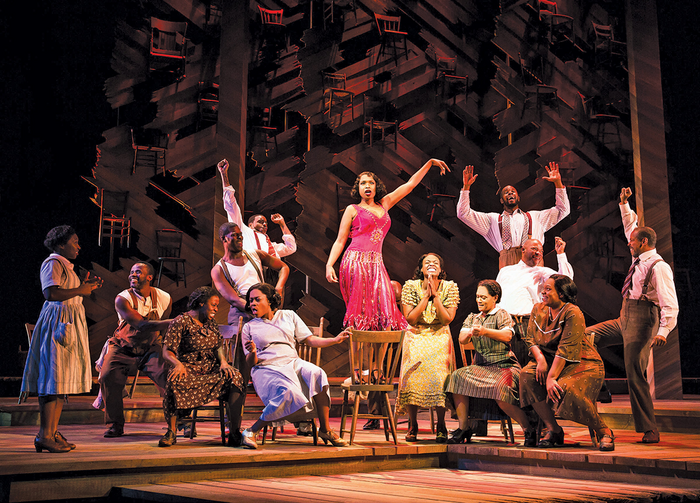 Apart from tales of the incarnation in the person of Jesus, God makes few appearances in our drama. God’s appearances on stage often are as the subject of a debate or a presence who acts and speaks through others. In this context, God becomes a kind of backstory and the ultimate existential answer to the oft-parodied actor’s question, “What’s my motivation?”

In two current Broadway musical revivals, God is also the ultimate offstage character—the silent confidante, conscience and occasional lightning rod for the lead characters as they journey through life and struggle to find meaning in its outsized hurdles and hardships. Both Tevye, in Fiddler on the Roof, and Celie, in The Color Purple, are protagonists whose prayers to the Almighty are central throughlines of their respective shows. In soliloquies that freely intermingle pleas, doubts and exultations, both Celie and Tevye argue with a God who, if we follow their eyes’ direction, is located somewhere in the theater’s second balcony. And though both have the kind of bone-deep faith that is all the more unshakeable for having been so thoroughly shaken, they follow separate paths to very different conclusions—as do these variably felicitous stagings.

In “Fiddler,” the brilliantly polished 1964 distillation of Sholom Aleichem’s tales of Jewish life in pre-World War I Eastern European shtetls, the milkman Tevye (Danny Burstein) wears his native religion with roughly the same mix of dutiful devotion and loving complaint as he does the perennially horseless dairy cart he hauls around the stage. As he watches his three eldest daughters marry off one by one, in escalating defiance of traditional Jewish custom, he also witnesses with growing anxiety the encroachment of Cossacks on the humble market village of Anatevka. These parallel assaults on his faith and his ethnic identity at last come to seem intertwined, indistinguishable—as the slings and arrows endured by a people blessed by God but cursed by their fellow men. As Tevye says, in a typical formulation, “I know, I know: We are Your chosen people. But once in a while, can’t You choose someone else?”

The sober-minded staging by Bartlett Sher, the director, feels heavier on the curses than the blessings. While his “Fiddler” has many of its well-worn charms in place—the pluperfect Burstein heads a fine, complementary acting company, and the show’s score is indestructibly tuneful and moving—he has directed it more as a drama than as a musical comedy. To be fair, this temptation is built into the material, as both of the show’s acts end unhappily. Still, this is not a Jewish “King Lear.”

The song “Matchmaker” offers a case study of the production’s misplaced emphasis. This exuberant, major-key waltz begins with Tevye’s daughters waxing dewy-eyed about marriage, only to have the eldest daughter, Tzeitel, dash their dreams by conjuring the terrible husbands Yenta may find for them. In Sher’s hands, this mildly cautionary but lightly smiling deflation of youthful romanticism becomes a startling wakeup call for the younger girls, who seem genuinely terrified by their bleak marriage prospects. In a show with violent pogroms yet to come, this sets the bar for tragedy pretty low.

Elsewhere Sher’s attention to nuance has its dividends. The show has lively new dances, adapted liberally from the original conceptions of Jerome Robbins by Hofesh Shecter, that feel at once more folky and more contemporary. And the matter-of-fact prominence of “shuckling”—the Jewish tradition of swaying during prayer—adds to the production’s sense of lived-in authenticity. But a striving for the authentic can be a dubious goal in a Broadway musical, as synthetic an art form as the animated film. As with Sher’s lovely but hollow current revival of “The King and I,” this relatively subdued “Fiddler” has an attention to detail that comes at the expense of larger gestures, of put-it-over-the-footlights showmanship, and that is a deficit beyond the reach of divine intervention.

“The Color Purple” is more successful in part because, in John Doyle’s singleminded staging, it aims straight for the only kind of authenticity that matters in musical theater: the emotional kind. It also benefits from a wider range, both in the vocal and the dramatic sense. Celie, the downtrodden sharecropper’s wife who miraculously manages to transcend a Job-like series of trials and torments, descends lower into dejection and rises higher in celebration than Tevye. And in Cynthia Erivo, a black Briton who originated the role in this imported revival—the rest of her costars here are African-American—this “Purple” has launched an incandescent new Broadway star.

In all my years attending theater, I have seldom felt as much direct, electric connection between an audience and a performer as in Erivo’s rendition of the roof-raising 11 o’clock number, “I’m Here,” in which Celie rediscovers the faith she thought the world had kicked out of her, but in a surprising new place: in her own beautiful, irreducible, God-given self. “With all the love alive in me,” she sings, “I’ll stand as tall as the tallest tree.”

Perhaps that image inspired Doyle’s stark, somewhat abstract design: towering stacks of chairs and unfinished wood. Elsewhere the director rightly puts most of his attention on burnishing the assets of the show, which had an underrated premiere in 2005. Artfully trimming Marsha Norman’s script (itself a deft if overstuffed pruning of Alice Walker’s original novel), Doyle makes the central relationships snap into focus: the thorny love triangle among Celie, her oppressive husband Mister (Isaiah Johnson) and the free-spirited singer Shug (Jennifer Hudson); the rocky but finally rock-solid union of the fierce Sofia (Danielle Brooks) and pliant Harpo (Kyle Scatliffe); the attenuated but unbreakable thread between Celie and her sister Nettie (Joaquina Kalukango).

Of course, there is also the relationship between Celie and her creator. Like Tevye’s, it remains seemingly one-sided, a monologue rather than a dialogue. But in this resplendent “Purple,” the sense of a feedback loop is palpable. When Celie sings “I’m Here,” it is not her presence alone that we are made to feel.

Correction: Feb. 24, 2016
A previous version of this article had the incorrect caption beneath the photo, which shows Jennifer Hudson, in “The Color Purple,” not Melanie Moore and Danny Burstein in “Fiddler on the Roof.”

@RobKendt
Show Comments (
1
)
Comments are automatically closed two weeks after an article's initial publication. See our comments policy for more.
Tom Poelker
5 years 5 months ago
It looks like you have the wrong cut line for the photo of The Color Purple.