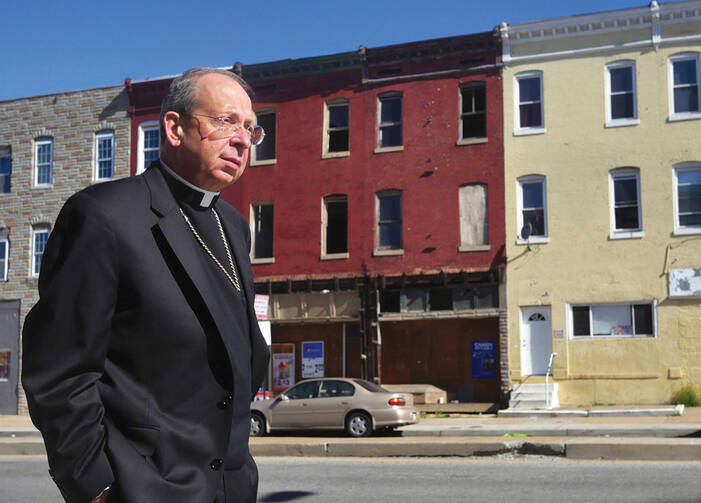 Three days after Archbishop William Lori’s city of Baltimore was rocked by civil unrest that began as a young man who died while in police custody was laid to rest, the archbishop was pondering how the local church could respond to the crisis in the city’s streets.

“We’re not the police force; we’re not the government,” Archbishop Lori said in an interview with America on May 1, “we are a community of faith.” And our faith tells us, he said, “that we should be a force for peace, for justice, for reconciliation and bridge-building.” But hope was another commodity, he suggested, that the church could offer, because “hope is in really short supply in these neighborhoods.”

Like many U.S. cities, there are in a way two Baltimores, Archbishop Lori said, one where buildings are being rehabbed and businesses opened and another “where chronically bad conditions have existed for generations,” where 52 percent of adults are unemployed and 25 percent rely on food stamps, where many struggle with poor transportation to reach low-wage jobs far from their neighborhoods, where a feeling of isolation and disenfranchisement pervades. “The systemic problems roll along,” said Archbishop Lori, “and then when an event like the death of Freddie Gray comes up, these things come to the surface.”

Many people may view angry protesters or the handful of residents who participated in looting and rioting on April 27, “and the first and only thing they can say is words of condemnation,” Archbishop Lori said. “But I think if one lived in those conditions and neighborhoods and saw no way out, the anger, the boiling over becomes not justifiable, but understandable.”

Archbishop Lori had spent the last few days meeting with local Catholic and ecumenical leaders and visiting the center of the rioting that broke out on April 27 after the funeral of Freddie Gray. Gray, 25, died while in police custody after suffering a spinal-cord injury. His death became the latest in a national string of deaths of young, unarmed African-American men, and in one case a 12-year-old child, at the hands of urban police.

While Archbishop Lori believes the church can act as a bridge-builder between communities estranged from the police forces that are meant to serve and protect them, he believes first that the criminality of such acts must be addressed. “Certainly we have to recognize those [police officers] who do their job well every day and put their lives on the line,” he said, “but then we have to recognize, and it’s true in almost any profession, including my own, people who not only err, but they err intentionally and who treat people in a way that is brutal and unjustified with excessive force and who sometimes target people because of the color of their skin.”

The state’s attorney for Baltimore City, Marilyn Mosby, announced on May 1 that Gray’s death had been ruled a homicide and that six Baltimore police officers would face criminal charges, ranging in seriousness from misconduct in office and false imprisonment to manslaughter and second degree homicide.

Worried that attention to Baltimore’s structural problems will fade when the media lights move on to the next “news story du jour,” Archbishop Lori argues it is time for a conversation, one he described as “overdue,” about U.S. communities that are being left behind. “Bishops have to equip themselves to participate in that conversation,” he said.

He believes the term “structural sin” applies to the civic crisis at the heart of the continuing controversy over police brutality. “I do think we should also have a national conversation that brings stakeholders to the table and that results in looking at what needs to be done to address [these] systemic problems.” Archbishop Lori plans to start by reaching out to the city’s ecumenical leaders to begin strategizing about how to bring hope back home to Baltimore.