The Anointing: Sacred and secular meet on the battlefield 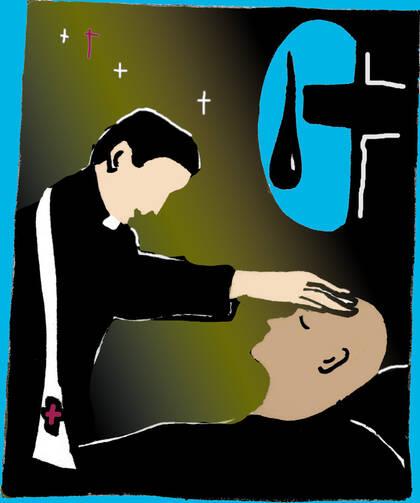 I’ll tell you an anointing story. A priest told it to me. He had been in a war. The war, he called it. We didn’t think there would ever be another war after that war, he said. Too bad we were wrong about that. That would have been a great thing to be right about.

I joined the Army and went to the war, he said. I was 20. They made me a sergeant just to fill out a duty roster. I hadn’t done anything to be promoted. My unit ended up in New Guinea. We were with the Australians. Essentially our battle was backing up slowly over a huge mountain range. Fighting backwards. The Japanese pushed us back all day and night. Eventually they were going to push us back into the sea and take over New Guinea and then take over Australia and make it the biggest air base in the history of the world. Well, in the end, we pushed them back into the sea, and that was the beginning of the end of the Empire of the Rising Sun. That was the first time they lost a land battle, you know. No one talks about that anymore, but if they didn’t lose that battle, who knows?

But I was telling you an anointing story, he said. Well, back then it wasn’t called anointing. It was extreme unction, and you did it only in times of dire sickness and imminent death. I knew that much from Catholic school and paying attention to our priests. We had five priests in our parish. Those were the good old days when there would be a pastor and then a flock of young guys training to be pastors. I’d seen them anointing old people and once a girl who had been hit by a truck in our neighborhood, and I paid attention. It was such a gentle sacrament, no fuss and special clothes, and it seemed to me that sometimes it worked just because the sick person believed so intensely that it would work, you know?

But it wasn’t primarily about healing, he said. It was primarily about spiritual healing. Getting right with the Lord before you went home. Remission of sins first and then maybe whatever other healing aspects might happen by intercession. And it was such an honest sacrament, you know? The priest would anoint the eyes, ears, nose, mouth and hands of the sick person, all the doors and windows through which your soul goes out to work in the world, or if things were really dire he would just anoint the head. That happened with the girl who was hit by the truck. He just anointed her head. That was the first time I saw a priest cry. She didn’t live another hour. She lived two doors down from me on our street and for some reason all the kids on our street were around when the priest anointed her. I remember my brother was outside looking through the window. This was in Chicago.

So I was in the battle in New Guinea, he said, and we were getting hammered, and one night a kid even younger than me got blown up, and me and another guy were the only guys within reach to get to him and be with him as he died. You could tell he was going to die pretty quick. We didn’t even call for a medic. He knew too, I think. His eyes were open but he couldn’t speak. I saw he had a medal around his neck, the Madonna, and I figured he was Catholic. Some Protestant guys I knew had medals but never the Madonna. The other guy with me that night was not a religious guy. He was from the state of Washington, I think. Anyway the kid who was dying was staring at me, and for some reason I felt like I should anoint him. I still don’t know why. It was something to do. It was the right thing to do, but it wasn’t religious, you know what I mean? It was a holy thing. Holy things are bigger than religions, even Catholicism. Religions borrow holy things. That’s why a priest sinning is such a terrible thing.

We didn’t have any oil, of course, he said, and we didn’t have any water, although it was wet as the bottom of the ocean in that jungle. My God it was wet. I thought about using a little mud but that didn’t feel right so to be honest with you I used the man’s own blood to anoint him before death. I did. He was bleeding from everywhere. I wiped my hand to get it as clean as I could and I took some of his blood and made a cross on his forehead and he looked at me and he knew what I was doing. I start to cry every time I think about that and that was a real long time ago. He knew I was anointing him for death and he closed his eyes for a minute and the other guy with us thought the kid had died but then he opened his eyes and I finished anointing him. I did his eyes and ears and nose and mouth but only one hand because the other was gone. I don’t think he even knew it was gone. His legs were a mess also. I don’t think he knew how bad he was hurt because he was hurt so bad. But he knew I anointed him. He knew that. He died a couple of minutes later. That was the first time I was ever close to a man when he died and you could actually see the life go out of him. He was alive, and then he just wasn’t, and you could tell the instant the soul left his body.

I tell the story of that kid in the jungle sometimes when I talk to new priests in my order, he said, and they ask me if that’s the reason I became a priest and I say no, me becoming a priest was a very long road, and really I started on that road long after the war, but now all these years later I wonder if they were right and I was wrong. That kid needed someone to anoint him and there I was, you know? Someone needed to be there. You need someone to be there at the very end. Some people have someone they would like to be the last person to touch them and say be forgiven, be clean, be peaceful, go with the Lord. But most people don’t, you know. Most people are alone. We never admit that. I think that’s why we have religions in the end, because we are so alone, and religions bring us together at the moments we all know are holy but hardly ever admit that. Sacraments are ways we insist on what’s holy. People think sacraments are stiff and boring and formal and just rituals, but I don’t think so. I try to remember they are ways to insist on holiness, you know what I mean?

Nowadays we don’t call it extreme unction anymore, he said, now we say anointing of the sick, and there were some men among my priestly brethren who complained and moaned and bickered about this, but I could never see that it mattered what you call it. Guys tend to complain about any change at all, of course. There’s still a guy I could name who is annoyed that we face the congregation when we celebrate Mass, and that was 50 years ago we made that change. Anyway whenever I start getting annoyed at guys complaining about things I think about that kid in the jungle and he reminds me that priests are just servants. Our job is to be there when it counts. Any priest who thinks he is cool or powerful or holier than anyone else is an idiot. I try to remember that. I try to remember that one time I was there when it counted. Anybody could have done what I did that night, but for some reason it was me. Maybe that was the spark that set me on the road to being a priest. I don’t know. It sure was a holy moment, though. I didn’t even know the kid, in this life—he had been with us for about three days, and no one even really knew his name. I’d like to meet that kid, somehow, after I die, and talk about that moment.

Brian Doyle is the editor of Portland Magazine at the University of Portland and the author, most recently, of the essay collection The Thorny Grace of It (Loyola Press).

Show Comments (
3
)
Comments are automatically closed two weeks after an article's initial publication. See our comments policy for more.
Chris Schwartz
7 years 8 months ago
Brian, The experience you narrate is a powerful example of the Spirit at work. Many would argue that the man performing the anointing was not a priest and should not have done this, but who are we to say how the Spirit works? In James 5:13, "Is anyone among you suffering? He should pray. Is anyone in good spirits? He should sing praise. Is anyone among you sick? He should summon the presbyters of the church, and they should pray over him and anoint [him] with oil in the name of the Lord, and the prayer of faith will save the sick person, and the Lord will raise him up. If he has committed any sins, he will be forgiven." As a deacon, I am with the sick and imprisoned frequently. I would never define an anointing that I do, "a sacrament", but surely it is sacramental. I ask the person if I can anoint them and when they say, "yes" I emphasize that this anointing is NOT a sacrament, but I have seen healing as a result of it. We all use holy water as we enter the Church and say, "Bless you", when our brother sneezes, why would we not anoint our brothers. Deacon Chris
Beth Cioffoletti
7 years 8 months ago
This is just about the finest thing that I've read in a long time. Thank you Brian Doyle! For awhile now I've been composing in the back of my head an essay called "The top 10 reasons I'm still uncomfortable being boxed into a Church". This writing gets at the heart of it. Sacraments ARE reality, not symbols of reality.
krkr games
5 years 8 months ago
thanks a lot for that I like this very much,very good post.العاب بناتالعاب بن تنالعاب 250لعبة البيرةالعاب فلاشالعاب داونلود