Alternate Reality: The dystopian world of ‘The Man in the High Castle’ 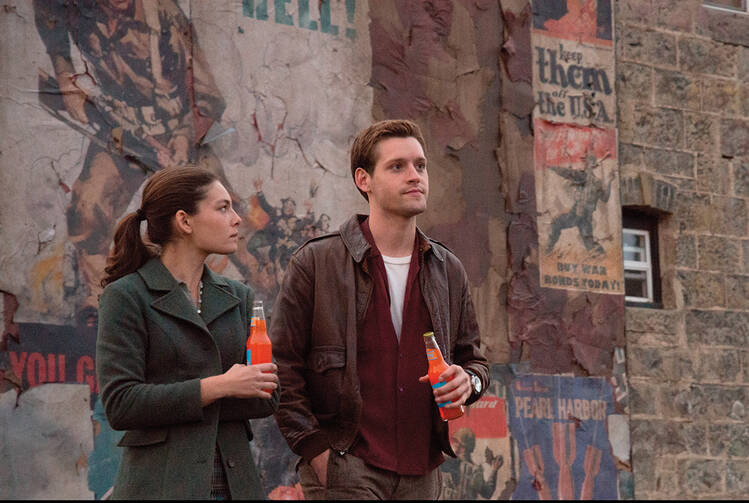 It is safe to say that if your last, best hope for avoiding nuclear war is the continued survival of Adolf Hitler, then you live in a dystopia. Such is the setting for the original series The Man in the High Castle, released on Amazon in November. Based on a Philip K. Dick novel, the series takes place in 1962 in a United States that lost World War II and is now occupied by Germany and Japan.

A political crisis is brewing, however, as a white-haired Hitler is rumored to be gravely ill. The Führer is satisfied with controlling the Eastern United States, but his apparent successors want more. The Japanese, who occupy the Pacific states but lack nuclear weapons, fear war with Germany.

At the outset of the series, viewers are meant to identify with young Americans who never knew freedom, but whose patriotism awakens as they are subjected to the occupation’s paranoid brutality and as they encounter contraband films that depict the world we know, in which the United States won the war.

Pursuit of these films drives the plot early on in the series. The San Francisco native and aikido student Juliana Crain (Alexa Davolos) encounters her sister, Trudy, on a dark street. Trudy passes Juliana a film, which she later learns is important to the American resistance and must get to the mysterious man in the high castle. Trudy runs, but the Japanese secret police catch up and kill her.

Juliana watches the film over and over, seeing images of the D-Day invasion and the meeting of Roosevelt, Churchill and Stalin at the Yalta Conference. Does she see a parallel, potential universe, or real events that were somehow forgotten? Juliana begins to believe in these possibilities and becomes determined to get the film into the right hands.

The series offers much imaginative pleasure and horror. The production design team, led by Drew Boughton, creates a world in which Ma Bell is a Nazi corporation and New York City’s U-Bahn, a monorail, presumably runs on time. SS officers in black, silver-buttoned jackets and jodhpurs manage the Greater Nazi Reich from a monstrous skyscraper adorned with eagles. At home, one of them, the obergruppenführer and family man John Smith (Rufus Sewell), receives a middle-of-the-night call from an agent; one half-expects his bathrobe to be accented with clanking medals. (Too bad; it’s not.)

In telling the counterfactual backstory, the series creator and “X-Files” veteran Frank Spotnitz explores the wide gap between the ease of conquest (a “Heisenberg device” leveled Washington, D.C., prompting a surrender commemorated annually on V-A Day) and the difficulty of state-building. Our foreign affairs today are marked by the inability to imagine productive ways to bridge that gap, and so ISIS and the Taliban have space to grow.

In the series, there is a large geographic gap between the German and Japanese occupations, as a lawless neutral zone populated by racial refugees spans the Rocky Mountains. This is where Juliana takes the film, and it is where she encounters the dashing stranger Joe Blake (Luke Kleintank) who, it turns out, also has a film. Convention demands that Joe also have secrets; his concern the true nature of his mission.

The crucial but thin relationship between Juliana and Joe exemplifies the weak points of the writing in “High Castle.” Chase scenes involving a cartoonish bounty hunter seem to take away time better spent on developing Juliana’s personal attachments to her family and to her crypto-Jewish boyfriend Frank (Rupert Evans), and clarifying her political motives. Joe’s own ties go only as far as a brief mention of a father nostalgic for freedom and a short appearance by Joe’s girlfriend and her son. None of this illuminates his loyalties.

Without fully developed heroes to root for, viewers’ interest easily shifts to the bureaucrats who run the occupation. Obergruppenführer Smith is an American traitor and a torturer, but his conflicts with the Reich make him a figure of sympathy. The best character, in every sense of “best,” is the Japanese trade minister Tagomi (Cary-Hiroyuki Tagawa), who broods behind thick-rimmed glasses, consults the I Ching to read the dire signs of the times and appreciates the rare and accidental beauty of nature and artifice. He radiates dignity, elevating every functionary who passes through the sliding shōji doors of his office. He also knows the cost of war—it is written in the deep lines of his face—and collaborates with a disaffected German officer to forestall it.

Assassination attempts, police investigations and betrayals ensue, but the series keeps returning to the mystery surrounding the films. The power of their images, though, is lost on the hapless resistance—and on Spotnitz, too. While Juliana, Frank and Joe scurry around, momentous events are steered by the men in tall buildings. The series ends with a chilling, if unintended, answer to the question of how to wring complicity from an occupied populace: distract them. In obsessing over the films, the resistance occupies itself. All the SS and Kempeitai need do is maintain a murderous charade of pursuing the films, too. They can pacify everyone else through a grim normalcy. Flakes of ash fall from the crematorium every Tuesday; the children need help reading Beowulf for their Aryan literature homework.

Fascism has been in the news lately, and some commentators have speculated about whether “The Man in the High Castle” presents a version of America that may yet come to be. That seems like a stretch. Even so, the series, despite itself, asks us what tiny battles American social movements wage, and what Pyrrhic victories they celebrate, while the power elite consolidates control over everything that matters.

@jonmalesic
Show Comments (
1
)
Comments are automatically closed two weeks after an article's initial publication. See our comments policy for more.
William Rydberg
6 years 8 months ago
Reminds me a lot of the 1968 Star Trek episode "Bread and Circuses" without reference to the "sun"...