All in One: Understanding the Holy Trinity and The Monsignor 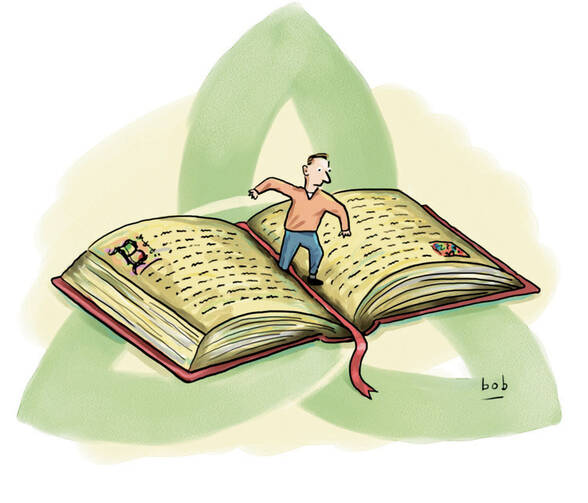 It was the use of the third person that confused me utterly in third grade, when we began to discuss the Trinity. We understood, if vaguely, the first person, the original idea, the progenitor, the instigator of all things, that which spake from the burning bush. We understood, less vaguely because of constant repetition, the second person, that nice Jewish boy, as my mother liked to say, savoring the dangerous levity; but we were flummoxed and discombobulated by the third person, who was a) not a person and b) not actually a ghost and c) even more confusing because the lesson just before the Holy Trinity had been grammar, in which we grappled for the first time, unsuccessfully, with the idea of the third person in “discourse, conversation, and rhetorical convention,” said Sister Margaret.

Even at age 8 I prided myself on being in the upper 70 percent of the class academically, but of the third person who was not a person, and after a lesson in the third person, I could make neither head nor tail. I was not alone in this—even that simpering, preening sycophant Maureen M. was stymied, I could tell, because she wasn’t for once waving her hand like a thrashing surf rod on a stormy day when the striped bass were running, or actually jumping up and down excitedly in her seat so that her desk shimmied out of her row every day, or making that idiotic Choose me Sister! face that we used to try to imitate at home until our mothers caught us and lectured us about ending up looking like that poor, trout-faced Ed Sullivan on television—God help us all!—if you continue to grimace like that I will inform your father forthwith.

Sister Margaret, who was the daughter of immigrants from County Mayo—God help us, as she always said—tried the usual shamrock explanation, which led us to believe the Trinity had something to do with agriculture. We still had one last small farm in our town then, and as we processed the idea that the Trinity was not unlike a sprig of clover, three that is at once one, we turned and stared at the son of the farmer, who was a mound of a child afflicted by exploding pens, and concluded privately that if the Holy Trinity had anything whatsoever to do with kids like Anthony, the church as a going concern was doomed.

Sister Margaret, no slouch, sensed our confusion, and tacked back toward grammar, giving a memorable disquisition about the third person that used our pastor as the example. Our pastor was universally referred to as The Monsignor, and the way those two words were pronounced you could indeed hear the initial capital letter on the word. Occasionally strangers or people new to the parish would call him Father, or Father Stephen or Monsignor His Last Name, but The Monsignor had a glacial stare and an alpine dignity that soon set things right. Now The Monsignor himself, said Sister Margaret, when referring to himself, would use the first person singular; when speaking to someone else, or being spoken to, would use, or would hear, the second person singular; but when referring to him indirectly, we would use the third person for him, and call him The Monsignor, isn’t that so? But in all three cases he remains himself, even though he is the first, second and third person. You see? One that is also three, three that is at once one. Any questions?

Thus it was that I spent a fair piece of my childhood thinking of The Monsignor as the Holy Spirit, and I can safely say that this elucidated a great deal about the glorious mystery of that immensely subtle and brilliant aspect of Catholic theology, for The Monsignor was a deft and subtle being, able to influence everyone without seeming to make any effort, able to inspire better and more creative performance without hector and thunder, claiming no credit for and leaving no trace of his stimulating presence, infusing all things with his spirit but assuming nothing like a form that we could understand as human.

He was a steady and enduring energy, accessible to anyone at any time, by all accounts, and inexhaustible; he had the great skill of affirming what you wanted to do, which meant you did it briskly and happily, because it was your idea, or you thought it was; he had the gift of silence, which not only can be wonderfully eloquent, but richly productive of eloquence and articulation; and he refused to be photographed, even at functions at which he was the presiding spirit, so that there is no evidence of his astonishing beneficial effect, but only a vague feeling among those who had been inspired that something slightly more than their usual selves was at work, or at least something had been of silent but powerful assistance in luring or welcoming their best selves from the usual muddle.

In later years, of course, what with higher Catholic education, my brilliant and subtle parents and many piercingly wise companions along the road, I learned that The Monsignor was probably not, in himself, as a man named Stephen, in se ut homo, the Holy Spirit, the third person of the Holy Trinity.

But I continue to think, all these years later, that you could do a lot worse than use him for an example, when trying to explain something that cannot be explained except by telling a story. It turns out that there are lots of things you cannot explain except by telling stories, which do not explain or define or account for them hardly at all, but do give you a subtle and telling sense of what we mean when we use the words holy and miracle and God.

Brian Doyle is the editor of Portland Magazine at the University of Portland and the author, most recently, of The Thorny Grace of It (Loyola Press).

Show Comments (
2
)
Comments are automatically closed two weeks after an article's initial publication. See our comments policy for more.
Paul Ferris
7 years 6 months ago
Great article....The Holy Spirit really inspires. Thanks....
Bruce Snowden
7 years 5 months ago
The Holy Spirit is the "power outlet" in the home wall of the Church, Faith its connecting wire, bringing vitality through that linkage to the music of the Word and Eucharist, announced through the Evangelical "Consoles" whom we are through observance, joyfully proclaiming "Let's dance! God is real!" as we rest on the floor of the Church, carpeted in Grace! Or something like that O Holy Spirit. "Come Holy Spirit Creator blessed and in our hearts take up Thy rest!"