It's been 35 years since the first reported case of H.I.V. in the U.S. How much has changed?

It's been 35 years since the first reported case of H.I.V. in the U.S. How much has changed? 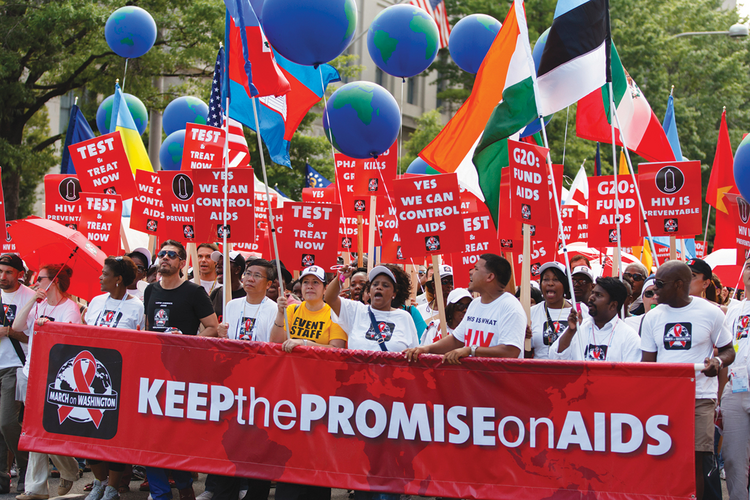 On June 5, 1981, the Centers for Disease Control and Prevention released its “Morbidity and Mortality Weekly Report.” The report described five cases in which young, previously healthy gay men were diagnosed with a rare lung infection—a report that would eventually become the first official publication on the H.I.V./AIDS epidemic in the United States.

As the crisis grew, programs were implemented to deal with the epidemic. Initiatives included the passing of the Ryan White Comprehensive AIDS Resources Emergency Act, the largest federal program for people living with H.I.V./AIDS. A number of Catholic organizations also cared for those who were infected. The National Catholic AIDS Network was created in 1989 to provide “education, technical assistance, and a support network for HIV/AIDS service providers as well as individuals and groups affected by HIV.” The African American Catholic HIV/AIDS Task Force is a network of national African-American Catholic organizations focused on community outreach, ministering to people living with H.I.V./AIDS and mobilizing locally and nationally within black Catholic communities.

The Catholic Church’s presence, however, has been most felt in the developing world, particularly in sub-Saharan Africa, a region that accounts for almost 70 percent of the global total of new infections each year. As of 2014, there were over 25 million people living with H.I.V. in this part of the world. Organizations like Caritas Internationalis and Catholic Relief Services have been critical players in the fight against H.I.V./AIDS internationally.

Today more effective treatment allows H.I.V.-positive individuals to lead long and productive lives. Thanks to prevention efforts and medical advancements, the United States saw a 19 percent decline in the number of diagnosed cases from 2005 to 2014. But coping with H.I.V./AIDS remains a physical and financial struggle for many people. A recent report from the C.D.C. predicts that half of black gay men and a quarter of Latino gay men will be infected in their lifetimes. At the end of 2012—the most recent year for which information on the virus is available—at least 1.2 million people in the United States were living with H.I.V. and/or AIDS.

Most at risk are African-Americans and the poor. Despite making up less than 20 percent of the population, African-Americans account for almost 50 percent of all new diagnoses. As new treatments are developed, the costs rise as well. As we better manage infections, impoverished citizens living with H.I.V. and/or AIDS face an additional burden. We encourage Congress to approve the additional funds included in President Obama’s 2017 budget for H.I.V./AIDS treatment and prevention, which includes additional funding for the Ryan White Act, treatment and care completion services for people living with H.I.V., and housing for individuals and veterans living with H.I.V./AIDS.

Tensions remain as to what degree condoms can be accepted as a preventive measure. In 2010 Pope Benedict XVI stated that condoms could be used in some cases to prevent the spread of disease, though not to prevent pregnancy. The focus on condoms, however, should not obscure the enormous contribution of Catholic ministries and programs in supporting people living with H.I.V./AIDS, both in the United States and the developing world. Churches can continue to advise against complacency and expand efforts like the African American Catholic HIV/AIDS Task Force, N.C.A.N. and programs of Catholic ministries worldwide.

America’s editor in chief, Matt Malone, S.J., writing about World AIDS Day in 2013, said that the H.I.V./AIDS crisis “brought out the best and worst in the church.” Even those who overcame the fear of contagion to minister to the afflicted were at times more concerned with pressing church teaching on homosexuality and drug use upon the sick and dying than with accompanying them in their illness. Fortunately, the prejudice that marked the early days of the H.I.V./AIDS crisis has diminished, while the good work of the church continues. Today, no less than 35 years ago, it is incumbent upon us to provide spiritual support to the sick and to aid those fighting drug addictions or seeking to resist the cultural pressure to engage in behavior that may put them at risk of H.I.V./AIDS. This epidemic, which disproportionately affects the most vulnerable among us, continues to require our vigilant attention.

Show Comments (
1
)
Comments are automatically closed two weeks after an article's initial publication. See our comments policy for more.
Richard Booth
3 years 7 months ago
As I recall, the American Church was pretty much hands-off while so many people were suffering so much. Maybe if a person like Pope Francis had been in the Chair at that time, HIV/AIDS victims might have received some real pastoral concern.
Advertisement