Why responding to Brexit isn’t so simple 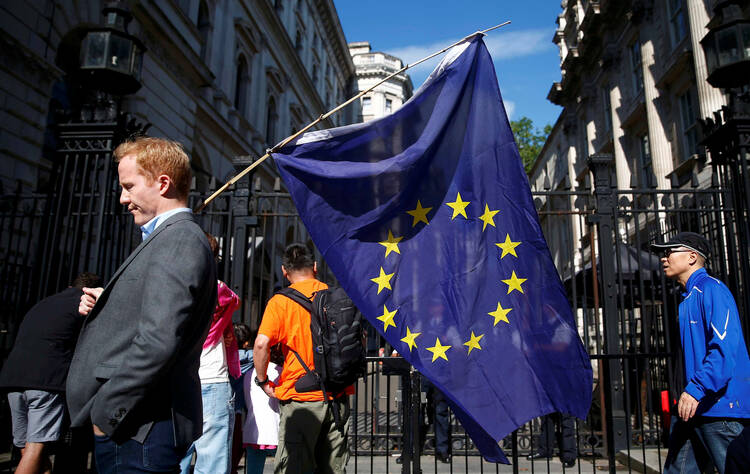 The “Brexit” referendum revealed some deep divisions in British society: between Scotland and England, between London and the rest of England, between young and old; the economically well off and those the economy has left behind; and, perhaps most alarmingly, between those ready to welcome immigrants and those fearful of more immigration. It also revealed a fundamental divide between the political, financial and journalistic leaders of the United Kingdom and the society they putatively lead. Despite warnings from experts that withdrawing from the European Union would weaken Britain’s economy, 52 percent of the electorate voted “Leave” anyway.

At this juncture, it is natural to focus on the shape Brexit might take or on the possibility that a new prime minister or Parliament might be unable or unwilling to carry out the decision of the voters. Historic as they may be, however, those next steps will not resolve the fundamental socioeconomic divisions the referendum has finally placed front and center.

These divisions require sustained attention, and not just within Britain. It would be a tragedy if the principal response of the European Union to Brexit were to stubbornly insist that Britain cannot enjoy any of the privileges of membership in the common market without full participation in the European project. Much more important now is an examination of institutional conscience: How have Europe’s opaque bureaucratic institutions, which many voters perceived to be practically undemocratic, inspired such fatal distrust in the project of “ever closer union”? Likewise, it would be a mistake for the main economic lesson of the referendum to be that nativism and xenophobia pose a risk to free markets and free trade, rather than the recognition that contemporary neoliberal economics creates clear winners and losers.

The questions Brexit raises echo across the Atlantic as well. The current presidential campaign in the United States is revealing similar divisions. In Britain, both campaigns were guilty of cynical overreach: the “Leave” campaign stoked fears of immigration and new arrivals “stealing” jobs and burdening social services; the “Remain” campaign responded by playing to the fears of an apocalyptic economic collapse. Visceral fears turned out to be more effective than accurate warnings in motivating voters.

One interpretation of the outcome is to focus on the bad motivations—xenophobia and racism—that drove some voters. A more charitable and instructive interpretation might be that such voters, given a choice between fears, chose the fears they felt they could identify with. The diagnosis, then, is not just that “they” have bad motivations but that no one they trusted offered them anything better.

The problem may be that the current social and economic order works well for the elite who wield political and economic power. Politicians, economists, corporate leaders and journalists (including, of course, America’s editorial board) are members of the educated, mobile, urban population for whom globalism, by and large, is a win. No matter how accurate, any advice the elites offer sounds like the wolf counseling the sheep about the benefits of natural selection. It may be true, but it is also self-interested.

Pope Francis made this observation in “Laudato Si’,” writing that “many professionals, opinion makers, communications media and centres of power, being located in affluent urban areas, are far removed from the poor, with little direct contact with their problems.” He warns that “This lack of physical contact and encounter…can lead to a numbing of conscience” (No. 49). This critique of inequality and indifference applies equally well within developed countries as it does from a global perspective.

The recognition that we suffer from a “numbing of conscience” should and does make us reluctant to propose solutions and policies as if we had a clear answer to the problems our society faces. The first order of business must be an examination of conscience and an attempt to wake it, to feel not only the pain and suffering but also the frustration and lack of hope that are often the experience of people who have been left behind by neoliberal economic policies.

It is also time to go “back to the well” of Catholic social teaching—which significantly inspired the European project at its origins. Politicians and economists need to make concrete and credible proposals that prioritize subsidiarity and put the common good at the center of policies to promote and govern global economic growth. The fact that we struggle even to imagine what such policies might look like only sharpens the need for them.

The Editors
Show Comments (
3
)
Comments are automatically closed two weeks after an article's initial publication. See our comments policy for more.
Lisa Weber
5 years 10 months ago
People need jobs even if they are minimally educated - that fact has been forgotten in the current economic policies. People could more easily start businesses if everyone were covered for healthcare. The belief that shareholders are the only people to consider in the government encouragement of businesses is wrong. Providing jobs is important too.
William Rydberg
5 years 10 months ago
In my opinion the "Editors" are in fantasyland... One would be better served if he were to reject thinking that countenances the comment about "America's Board" members being part of the group that would be potential "winners" with "globalism". The reality is frankly that should the trajectory that North America's is currently on, were to continue with the actual (unofficial) unemployment rate at somewhere north of 25% when adjusted for "those who have given up looking for work". Could translate in to job transfers to other countries and Long-term structural unemployment. Point is, the Editorial Board members are by and large, Unilingual and do not possess hard technical skills. Not many jobs in Beijing, Hanoi, or Indonesia for them... To make the current claim in this article about the members of America's Board benefitting in the long run from TPP is in my opinion, asinine.. And we haven't even discussed religious freedom-America's Board members DEFINITELY would be considered "proselytizers" is many of the nations targeted by TPP... Presenting a problem... Finally, yet another Canadian perspective that discusses the practical problems people's experienced with a detached centralized post-modern bureaucracy. http://news.nationalpost.com/full-comment/rex-murphy-those-who-voted-to-leave-the-eu-werent-stupid-they-were-just-angry-and-with-cause Finally, with that said, one finds it sad that America's Edititors never seem in my opinion to see the structural flaw in refusing to include acknowledgement of Europe's Christian foundation in its Constitution. In spite of the Pope's many unsuccessful requests. Sad...
Robert Killoren
5 years 10 months ago
It would be better if people on both sides of the issue remember that those who do not know history are doomed to repeat its mistakes. If the wealthy and elite don't work to address the injustices against the poor and marginalized the downtrodden will rise up in revolt. If the fearful masses flock to the demagogue who voices their anger and hatreds they will find themselves losing their liberty under the heavy hand of a dictator.