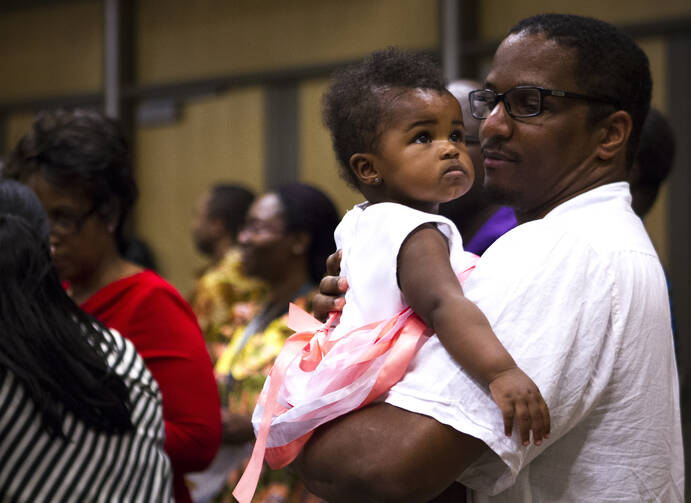 The African family, with its reverence of elders, sense of solidarity and community, and adherence to religious traditions has great gifts that need to be shared, a Louisiana bishop said Aug. 6 in addressing a group of about 300 Catholics who hail from the continent.

Bishop Shelton J. Fabre of Houma-Thibodaux urged those gathered for his keynote address at the Third African National Eucharistic Congress in Washington to hold tight the values from their native homelands, especially values rooted in faith.

"Keep for yourselves the wonderful culture and the beneficial gifts of the African fabric of life," he said.

The African fabric of life, he added, "is exemplified and witnessed in the beautiful garments that you wear from your native lands."

Instead of colors, the fabric of the African Catholic family is one made up of treating elders as valuable receptacles of wisdom and knowledge, not as burdens, of seeing children and family, not as obstacles to success, but as gifts that can help a person withstand life's trials, and is enhanced with a "lively faith" that can be seen in people's religious practices, said Bishop Fabre, who also is chairman of the U.S. bishops' Subcommittee on African-American Affairs. These, he said, "are the wealth of the gifts that you bring."

But the U.S. church also needs to help the African Catholic family as it settles into a new life in a new home, said Colette Kuegah, of Omaha, Nebraska. She explained to the bishop that her son "left the church" and switched to a different faith in the U.S. even as the family was firm in its Catholic faith in its native Togo. The church needs better outreach, she told Catholic News Service, adding that some younger people feel as if no one cares whether they're in church or notices when they leave.

One of the reasons for the gathering tailored to African Catholics, said Sister Joanna Okereke, assistant director for cultural diversity in the church at the U.S. Conference of Catholic Bishops, is to help African Catholic churchgoers connect, find a sense of community and collectively recognize their gifts of religiosity, family and joy, she said.

Some of that perspective can get lost, said Bishop Fabre, in a new land that, while rich in material comfort, is also rich in individualism, secularism and relativism that can erode faith.

"I will not shy away from recognizing the tendency that many sons and daughters of Africa -- from other countries as well -- come to America and surrender completely to the culture here, thereby letting go of the wonderful values from their native countries," he said. "Sadly, there are those who come from Africa and end up abandoning their rich faith-filled cultures, traditions and practices."

Instead of embracing the secular culture, "your challenge in arriving here is to strive wisely to integrate the culture of America but not totally to assimilate and surrender all spiritual challenges," he told the crowd.

He added: "Embrace and integrate the many goods offered by this country, and there are indeed many good things here in the United states, but also recognize and offer the good you bring with you from afar."

But immigrants and their families abandoning faith-rooted values is a concern, said Sister Okereke, who is a member of the Congregation of Handmaids of the Holy Child Jesus. For the first time, the gathering offered a session for young people to discuss their challenges and views of being Catholic in a climate different than their parents'.

"It's a concern that many are leaving the church," said Sister Okereke, adding that providing a community, such as the one offered by the gathering could help them see and affirm their spiritual riches. The gathering offered a Mass in French, filled with music heard during services in some African countries and celebrated by Cardinal Laurent Monsengwo Pasinya of Kinshasa, Congo.

Forming a sense of community for African Catholic should also be embraced at the diocesan level, Sister Okereke said, so that they and their families feel valued at the parish level.

Bishop Fabre said that by focusing on the sacraments, particularly the Eucharist, African Catholic families can be part of new evangelization by not giving in to the "false gods" of comfort, prosperity and as well as the different "isms," including individualism, materialism, pessimism, agnosticism, and atheism.

"The gift of the Eucharist reminds and challenges us not give ourselves over the false gods so prevalent today ... but to give ourselves to the living and true God, who loves and nurtures us," he said.

He added that the African Catholic family also can heed the second call of the new evangelization, which is to extend an invitation to Catholics who no longer practice their faith.

"While we ourselves struggle to overcome all the temptations of a secularist culture today," he said, "we recognize that there are many people, even many Catholics who have been overwhelmed by the many secular and other tendencies that have captured their attention and their loyalty at this time in history."

With their gifts imported from an area of the world that is a "bastion of faith," African Catholic families can take up the mission to evangelize, Bishop Fabre said.

As members of the African Catholic family, "you can be and must be agents here in this country of the new evangelization," he said. Evangelizing is not about proselytizing, he said, but about maintaining practices they know well -- valuing the extended family, especially elders, remaining involved in parishes and showing their communities some of the African solidarity so prevalent in their homelands.

"In your neighborhoods and workplaces, do no shy away from living out and manifesting your authentic African culture and values that are rooted in faith," Bishop Fabre said. "The good that you manifest will impact others as they see the light of Jesus Christ shining over you. Seize every opportunity to joyfully serve as a missionary disciple, strengthened by the Eucharist."