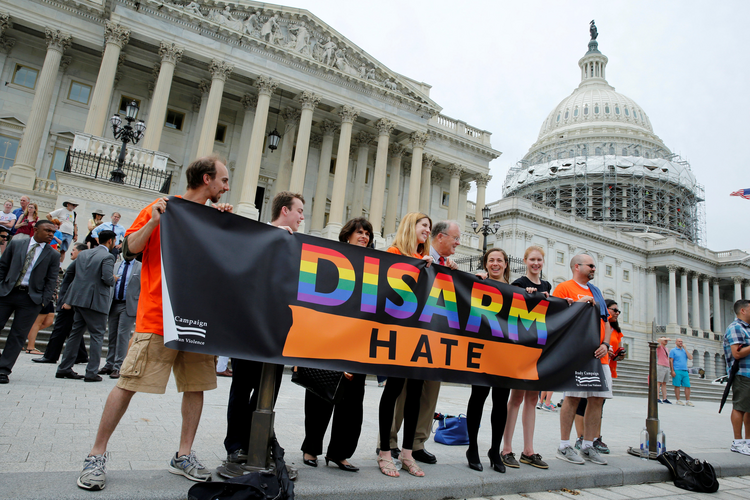 In the first 181 days of 2016, there have been 163 mass shootings in the United States, data gathered by the Washington-based nonprofit Gun Violence Archive show.

Those mass shootings, defined as incidents in which four or more people are wounded or killed, led to 232 deaths and 643 injuries.

Not all such incidents make headlines—except locally. Only occasionally do they reach the scale of the June 12 massacre at a gay nightclub in Orlando, Florida, in which a lone gunmen armed with high-capacity, quick-reload weapons gunned down 99 people, killing 49.

Clergy, gun control advocates and other observers say though that gun violence of any type—whether characterized as mass shootings or not—is destroying the soul of the country.

But solutions have been hard to reach.

"No one has answers. We are all, every one of us, affected by the problem. No one has the right answer," said Stephen E. Sussman, associate professor of public administration at Dominican-run Barry University in Miami.

At least four bishops recently addressed gun violence. Their concern: U.S. society has a moral responsibility to enact gun control measures to protect society. Most importantly, they maintain, gun violence is a respect-for-life issue and their pleas for action are not rooted in politics.

In total, they have called for banning civilian access to military-style weapons, implementing background checks before gun purchases and prohibiting people on the federal no-fly list from obtaining a firearm.

"It is time for us as a nation to require at least as much from those purchasing guns as we expect from those making application for a driver's license. Public safety must always come first," Bishop David A. Zubik of Pittsburgh said in a June 24 statement.

"It's respect for human life," he said. "We see so many different incidents of this type of violence that are occurring. And also that we take a look at that as a society. We're becoming numb to these kinds of incidents."

Bishop Kevin J. Farrell of Dallas has been particularly outspoken, having forcefully addressed the issue twice on the diocesan blog this year. His stance has received harsh criticism from gun rights backers. He told CNS that he was hardly offended because his concern extends to the protection of human life.

"The time for waiting is over," Bishop Sullivan said in a June 23 posting on the diocesan website. "It was over after Virginia Tech, after Charleston, after Sandy Hook, after San Bernardino and again now. How is it possible that these violent weapons can be purchased with such ease by people who have previously demonstrated signs of being a danger to others? And just as importantly, should these weapons be so easily and quickly purchased by anyone?"

Patricia McGuire, president of Trinity Washington University, in an interview with Catholic News Service after the Orlando shootings, said it was time for the entire church, led by the U.S. Conference of Catholic Bishops, to insist that meaningful gun control measures be adopted.

"The church does not hesitate to speak where it feels that political action will protect life. I think we should be vigorous on this, starting with banning the sale of assault rifles, requiring background checks. That seems like such a minimal step to protect life and to call people to action," McGuire said.

Gun rights organizations, such as the National Rifle Association, argue that any limit on acquiring firearms violates the Second Amendment. Their argument is based on the idea that responsible and trained gun owners could more readily disarm an assailant meaning to inflict harm on innocent people in public places.

So far, that argument has held sway in Congress. For example, a bipartisan-backed bill introduced June 21 by Sen. Susan Collins, R-Maine, would ban anyone on federal watch lists from obtaining firearms.

Within 48 hours, however, the Senate again voted not to act, leaving the bill in legal limbo -- not tabled, but without the 60 votes necessary to move forward under the chamber's rules to move forward. The vote was 52 to 46.

The House adjourned June 23 without enacting any legislation despite a 24-hour sit-in by Democrats to call for a vote on gun control measures.

Meanwhile, the U.S. Supreme Court determined in a 6-2 vote that a domestic violence assault committed "recklessly" is a misdemeanor, triggering a federal law that bans gun ownership. The Lautenberg Amendment, adopted by Congress in 1996, was enacted to prevent future acts of domestic violence by a person previously convicted of such an offense.

Brett Wilmot, associate director of Villanova University's Ethics Program, suggested in an email to CNS that the country needs "to change the way we think about reducing the presence and availability of guns in our communities." He called for reframing the arguments from one focusing on "the loss of individual rights and liberties or as evidence of our subordination and servility in the face of an oppressive government or as an increased threat of our falling victim to crime."

"We need narratives that celebrate the social, cultural, political, health and security benefits that emerge in the absence of these weapons, or at least in the absence of many or most of them, particularly those with the greatest capacity to kill and maim," said Wilmot.

Barry University's Sussman, a leader in the South Florida Jewish community, put it even more simply, saying it's time to put politics aside.

"We need to bring everyone together (to find an answer)," he said. "We're not Republicans. We're not Democrats. We're not independents. We're all Americans."

Show Comments (
1
)
Comments are automatically closed two weeks after an article's initial publication. See our comments policy for more.
Lisa Weber
4 years 1 month ago
The argument that holds sway in Congress is that the gun manufacturers make money selling machine guns to the general public. They pay lobbyists. The general public has failed to take enough interest to either persuade the people in Congress to vote differently or to vote them out of office. The problem is us.
Advertisement