A Broadway Revival: 'Godspell' gets updated 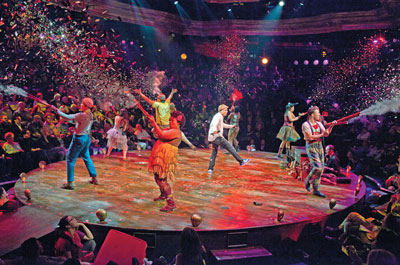 A musical is supposed to send us out humming the tunes, but audiences at the new Broadway revival of Godspell seem to be going in humming the tunes. “I’m just warning you, you’ve got some singers behind you,” one woman said, gesturing to her three teenage daughters, as my companion and I took our seats at the Circle in the Square. The theater’s in-the-round configuration amplifies the campfire-singalong vibe, as audience members can look across the stage and see each other mouth, clap and/or head-bop along with Stephen Schwartz’s catchy score.

It is not a knock to say that this brightly colored, brashly interactive revival has been engineered for audiences like this—gatherings of the faithful. By faithful I don’t necessarily mean adherents of the Christian faith, though they are certainly among the throng, but believers in this unusual 1971 pop/rock confection.

Whether this revival can win new converts and become a born-again Broadway hit is not easy to predict. That is because, even for a show of its era, “Godspell” is an odd duck. Its closest counterparts are “Hair,” the 1968 blissed-out hippie revue that was successfully revived on Broadway two years ago, and “Jesus Christ Superstar,” the 1971 rock-operatic Gospel narrative, which is slated for another Broadway run next spring.

The peculiarity of “Godspell” begins with the score, which employs Schwartz’s considerable show-pop songcraft not to dramatize characters or narrative but to create a series of straight-up praise songs, with lyrics derived from Matthew’s Gospel (“Prepare Ye,” “Light of the World,” “Alas for You”) and from the Episcopal Hymnal of 1940 (“Day by Day,” “Bless the Lord,” “All Good Gifts,” “We Beseech Thee”). The show’s best song, though, has original lyrics: “Beautiful City,” written by Schwartz for the 1973 film version, with further revisions in the 1990s, evokes a latter-day American take on William Blake’s poem “Jerusalem,” with its vision of “not a city of angels” but “a city of man.”

While they lack the basic elements of drama, Schwartz’s songs at least have heft and buoyancy. But John-Michael Tebelak’s patchwork script does not make up for the music’s dramatic shortcomings. A crazy quilt of parables and teachings from the Gospels of Matthew and Luke, “Godspell” is less a traditional musical than a combination praise service and theater-games exercise.

Yet if you couple the atmosphere of communal expectation this 40-year-old show stirs in its fans with the fact that the show itself is designed as little more than a receptacle for those good vibes (you might even call it a kind of communion), it is easy to understand the strategy of the new revival, directed by Daniel Goldstein. It wants to tickle us where we live by liberally adding topical references (Steve Jobs, Lindsay Lohan, Heidi Klum) and audience interaction, as well as by amping up the musical arrangements to embrace disco, prog-rock, metal, hip-hop and “Glee”-style vocalizing. The approach smacks of an over-eager youth pastor straining to be hip for an audience of skeptical, ADD-addled kids. The uncharitable term for this would be “pandering,” though St. Paul might endorse it as a case of being all things to all people.

The good news is that this “Godspell” succeeds, at least on one level. It connects with willing audiences—from its endearing, vocally superpowered cast supporting Hunter Parrish’s blond heartthrob Jesus to director Goldstein’s try-anything ethos, which embraces Pictionary, confetti cannons and trampolines in turn.

The bad news is that this eagerness to amuse and distract sometimes edges perilously close to desperation; often it undermines or ignores the moral force of the teachings it seeks to illustrate.

When my theatergoing companion, a secular Jew, asked me to give him a rundown of some parables before the show, I found myself unable to retell the parable of the prodigal son without getting choked up with emotion. By contrast, this “Godspell” packs so many pop-culture references into its telling of the tale—including an Oscar-film highlight reel performed by the versatile Telly Leung—that its message of joyful mercy giggles past without effect. The parable’s conclusion is particularly telling: The loyal son keeps on steaming over his brother’s homecoming party until Parrish’s smiling swim-coach Jesus swoops in to close the deal and make him hug dear old Dad.

In fact, this kind of tidy turnaround happens repeatedly with Jesus’ harder teachings: Game ensemble members clownishly demonstrate some conflict or contention, and then their benevolent master gently shames them into forgiveness and comity. This is not Jesus as prophet and healer; this is Jesus the pre-school teacher giving his class a time out.

The Gospels’ strains of apocalyptic, wheat-from-the-chaff judgment get similarly dumbed-down treatments. In the play, the parable of Lazarus and the rich man becomes a standoff between a birth certificate-doubting Donald Trump and a Borat-like Abraham, while the parable of the sower enacts the deaths of the first two seeds by way of slow-motion instant replay.

After all the Romper-Room frolicking, the sudden transition in the second act to serious episodes from Jesus’ life is deeply unsettling. The Pharisees’ interrogation of Jesus about the greatest commandment gives us the only foreshadowing of the Passion we get before we are off to the Last Supper, Gethsemane and an express-train ride through the Stations of the Cross. Historically, there is a serious line of theological questioning that asks, “Why did Jesus have to die?” Here the question is less theological than commonsensical: What did that sweet guy do to get hung up there?

Whether or not this “Godspell” turns out to be a hit, it has been cited by some observers as the latest example of a purported trend: Broadway getting religion. From “Book of Mormon” to “Sister Act,” goes the argument, God is back in the business of show. As much fun as all these shows may be, however, it is hardly snobbery to note that none contains theological insight or even content. The same is true of “Godspell.”

For the most affecting play on religious themes playing in New York at the moment (or in recent memory), you have to venture a little Off Broadway, to the Laura Pels Theater, where Stephen Karam’s “Sons of the Prophet” is playing. Karam’s delicately uproarious comedy about a Maronite Catholic family in Pennsylvania wracked by catastrophes large and small, is subtle, soulful, and sneakily profound. There’s even talk that it may move up to Broadway, just as the scrappy Off-Broadway hit “Godspell” did back in the mid-1970s. If “Sons” did make the move, it would join an encouraging crop of American plays with large thematic ambitions, if not always successful executions: Katori Hall’s “The Mountaintop,” a somewhat silly fantasia about Martin Luther King Jr.’s last night on earth; Jon Robin Baitz’s “Other Desert Cities,” about a Palm Springs Republican clan’s toxic secrets; David Henry Hwang’s “Chinglish,” about miscommunications both comical and serious among the world’s two great powers; and David Ives’ “Venus in Fur,” a sizzling power play about gender roles.

Even in this mostly august company, though, “Sons of the Prophet” would likely stand out, bearing witness as it does to truths that aren’t often the subject of drama: that forces we can’t explain with psychology or science, let alone tidy dramaturgy, drive our lives to a sobering extent, and that inexplicable suffering can be a window into transcendent insight and binding empathy. Now, if someone could just set that to music, we might have a winner.

Rob Weinert-Kendt, an arts journalist and associate editor of American Theater magazine, has written for The New York Times and Time Out New York. He writes a blog called

@RobKendt
Show Comments (
1
)
Comments are automatically closed two weeks after an article's initial publication. See our comments policy for more.
Bill Dodds
9 years 9 months ago
I suspect the balance between fun story and faith story will always tilt to one side or the other. That was the trouble I had with "Pope Bob," a novel I finally self-published on Kindle. Catholic publishers didn't want a book about a drunken pope who ends up on Seattle's Skid Road. And commercial publishers didn't want a book that seemed too Catholic. I would explain "and it's funny" and that really ended the discussion. Still . . . it's been out for more than a year now and has met with success.