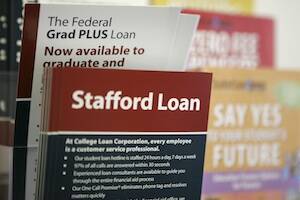 The growing number of Americans going to college—more than 20.4 million were enrolled as of 2009—has brought about a worrisome financial situation. This year the total amount of outstanding student loans in the United States is expected to exceed $1 trillion. And the College Board reported that the average amount borrowed by full-time undergraduates increased by 63 percent between 2000 and 2010. Defaults have also increased. While this sounds like a matter of personal finance, it is a trend that can affect the entire nation. According to USA Today, young Americans with crushing school loans often delay starting families or making major purchases, which negatively affects the economy.

The high cost of a college degree has led some to question the value of a college education. Peter Thiel, founder of PayPal, recently argued that the United States is experiencing an education bubble, which forces many students to make job decisions based above all on salary.

Today’s high school students must be taught the serious implications of taking out loans. But the interest rates on student loans must once again be regulated and monitored, and the grace period for federal loans should be extended to one year from six months. Many state schools provide a quality education for a fraction of the price of private institutions, and students should consider the pros and cons of each. A college degree can provide enormous benefits, but young Americans should not be forced into a lifetime of debt to earn one.

In the film “Deadline—U.S.A.” (1952), an old immigrant woman brings to the managing editor of The Day, played by Humphrey Bogart, evidence about the murder of her daughter that will convict a gangster boss of the killing. Why bring this evidence to The Day rather than to the police, he asks her. She replies, “I no know police. I know The Day.”

The newspaper has served as the American classroom. It raises literacy, records history, binds the community and makes democracy possible. Today those responsibilities are said to have moved to new media—television, Facebook and Twitter. But can they carry the load?

Few public schools teach news literacy. A third of young adults receive no news on a typical day. Pre-college students spend over seven hours a day on entertainment media, while the reading of newspapers, books and magazines has declined.

One response to this is the News Literacy Project, a national endeavor involving 20 news organizations, 185 journalists, and teachers, in which middle and high schools and the media combine resources. Through workshops they teach students to read, create, write and speak critically in all media, both old and new.

They distinguish between verified information, spin and misinformation. Above all, they stress the relationship between media and democracy. As Bogart’s character says, “The free press is like a free life—always in danger.”

In the film’s last scene, Bogart pulls the switch that starts the presses rolling. The gangster boss phones Bogart to intimidate him and hears the presses’ roar. “What’s dat?” he yells over the din. Bogart replies, “That’s the press, baby. And there’s nothing you can do about it.”

Perhaps in the N.L.P. Bogart is back.

Held in Assisi, Italy, in 1986, the World Day of Prayer brought together leaders of the world’s religions in a spirit of goodwill to work toward a common goal. In a moment of enormous symbolic importance, Pope John Paul II stood alongside Jews, Muslims, Hindus and many other people of faith to pray together for peace.

Last month, world religious leaders reconvened in Assisi to mark the 25th anniversary of that event. Unfortunately, the Vatican planners did not provide an opportunity for the delegates to come together in prayer. “The real prayer will be here at St. Peter’s on the vigil [Oct. 26], when the Holy Father is with the Catholic faithful,” said Cardinal Peter Turkson, president of the Pontifical Council for Justice and Peace.

It is no secret that some Vatican officials, including then-Cardinal Joseph Ratzinger, voiced serious concerns about the interreligious prayer at Assisi. And theologically, such gatherings raise a host of questions. Still, the World Day of Prayer was a breakthrough event precisely because religious leaders prayed in one another’s presence. For them, the goal of peace superseded theological disagreements.

Prior to Assisi, “interreligious relations for most Catholics remained distant, almost exotic,” wrote John Borelli, an expert on interreligious dialogue. That all changed in a single, dramatic event. At a time of increasing religious strife, particularly in the Arab world, interreligious conversation is as important as ever. The moment of interreligious prayer at Assisi was a bold act that bore great fruit. The Vatican’s decision is an unfortunate step backward at a time when the church can play a crucial role in forging the path to peace.

The Editors
Show Comments (
3
)
Comments are automatically closed two weeks after an article's initial publication. See our comments policy for more.
Clint HYER
11 years 3 months ago
"For them, the goal of peace superseded theological disagreements."

Doesn't the present Vatican consider the term "interreligious dialog" a euphemism for evangelization?
C Walter Mattingly
11 years 3 months ago
There are many things that contribute to the high cost of college educations. Several years back I was advisor to the English graduate program to a major public college. Typically, graduate assistants taught 2 courses a quarter for a small stipend and tuition waiver. One senior professor did not publish a book in the time alloted. His punishment: he was forced to teach a third course, unlike his fellow tenured professors, one more than the full-time graduate students taught every quarter while taking full class loads of their own, often working other jobs simulataneously.
Cathi De Genova
11 years 3 months ago
Sadly so many students will graduate in the next few years with tremendous debt and very little employment opportunities.