Skip to main content
Signs Of the TimesOctober 31, 2011 issue 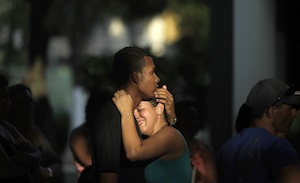 Ask the Rev. Laurence Tracy about poverty in the mostly Hispanic neighborhood of Northeast Rochester that he calls home and he starts talking about funerals. For 40 years, Father Tracy, 71, has kept statistics about the people whose funerals he presides over or helps plan.

These days, Father Tracy’s informal analysis points to worsening economic challenges for the residents in the part of the city encompassing St. Francis Xavier Cabrini Parish, spiritual home for Rochester’s Hispanic Catholics. Although he is officially retired as a priest of the Diocese of Rochester, he still maintains an active “ministry of presence” on the streets of the city.

He’s finding that people are younger and sicker when they die.

“I do about 125, 130 funerals per year that I’m involved in some way or another,” he said. “Probably 20, 25 people die in their 40s or 50s as the result of liver failure and kidney failure because of drug and alcohol addiction, which is a consequence of poverty. It’s not just a moral problem: ‘They’re drunks.’ No, no. That’s due to a lack of beds for recovery.

“I probably do about 10 babies or children a year, children of teenage mothers. I did a [funeral for a] 2-month-old baby about two months ago. The mother was 16; she was 15 when she was pregnant.”

Father Tracy argues that people who die younger than 60 years old “do so because they don’t have health care.”

“There’s no preventative care,” he said. “They go to the emergency department for treatment. They’re not getting adequate care. They don’t have money for medicine.... Most of them shouldn’t die. It’s the result of socio-economic issues,” he said.

Father Tracy’s unorthodox study is backed up by current Census Bureau data. In 2010, 15.1 percent of all U.S. residents lived in poverty—the highest percentage since 1993—and more than 46 million people, or one in six Americans, were under the federal poverty threshold.

The U.S. Hispanic population has been hard hit during the recent economic downturn. There are now more Hispanic children growing up poor than white children, 6.1 million to 5 million, even though Hispanics represent only 16 percent of the total population.

Father Tracy also is involved with the funerals of a number of homicide victims each year. He has observed that some are the result of family arguments brought on by the “pressure of poverty.” Some are the result of turf wars between gangs or rival drug dealers, he said.

“These are consequences, indicators of poverty. It’s not just how much money you have or don’t have,” he explains.

Father Tracy has joined his neighbors in protesting drug dealing and crime. And he talks about the trials facing the residents of his neighborhood in his homilies at St. Francis Xavier Cabrini in the hope of raising awareness of what he sees is a need to “create some balance in our economy.”

“We need a social economy, where it’s not profit, it’s people,” Father Tracy said, “an economy that doesn’t just focus in on profits, where it doesn’t just have everything flow to the top.”