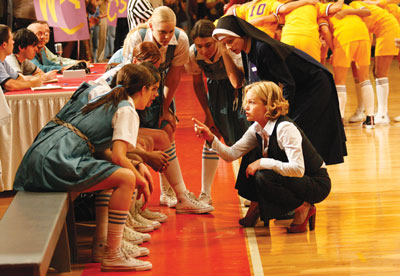 In 1970, 22-year-old Cathy Rush accepted a job coaching the women’s basketball team at Immaculata College for $450 a year. This was her first step toward leading this small Catholic institution outside of Philadelphia to three national championships and the whole country toward a new vision of what women’s basketball could be.

The team’s amazing journey from a makeshift gym to the national spotlight has been adapted for the big screen in The Mighty Macs, a plucky, inspiring but uneven film, written and directed by Tim Chambers.

Since “Macs” opens with this homage, it is hard to avoid drawing comparisons between it and “Hoosiers,” which ESPN once called the greatest sports movie of all time. Much of the structure and the main themes of the two films are similar, and on one level “Macs” measures up. In the game scenes the girls hold their own, executing convincing plays and showing great form on the court. But on the sidelines “Macs” falters a bit. Where “Hoosiers” provides an Oscar-nominated performance from Dennis Hopper as an alcoholic assistant coach trying to stay sober, “Macs” offers the assistant coach Sister Sunday (Marley Shelton), who is reconsidering her vocation. This struggle is no less serious, perhaps, but this sort of internal turmoil lacks the same onscreen drama.

Like the Norman Dale character, Rush is a tough coach who pushes her players to their mental and physical limits. Gugino is convincing and charismatic in this role and seems as comfortable striding through the school hallways in her high heels and oversized, 70s-style collars as she is wearing her whistle and warm-ups under the hoop. She is unafraid of the imposing but ultimately soft-hearted Mother St. John (Ellen Burstyn), the head of Immaculata College. The determined pair make for a good team of their own as they work to overcome the college’s financial struggles. Burstyn plays her role with just the right combination of sternness, sympathy and humor. When Cathy requests money for new team equipment, the sister gestures to her sparsely furnished room and replies, “Help yourself to anything I have.”

Like “Miracle,” a film that examines the 1980 U.S. Olympic hockey team’s victory over the Soviets in light of that era, “Macs” uses the microcosm of a team to explore the zeitgeist of the 1970s. A car radio broadcasts news of women hoping to earn equal pay for equal jobs, and the issue of a woman’s role in society is reflected in both Cathy and Sister Sunday, who search for fulfillment in their respective vocations. Their team, as a whole, reflects well the emotions and experience of teenage girls at the time, as they raise questions about marriage and careers. The girls wonder: Why should Cathy work if she has a husband? They struggle with their own relationships and families, as Rush teaches them to define themselves not by the men in their lives but by their own dreams and accomplishments.

Rush’s marriage embodies this struggle. She is a newlywed, married to N.B.A. referee Ed Rush (David Boreanaz), but in the film it is difficult at first to see why she is attracted to him. Ed grows annoyed when his wife accepts the coaching position and grows angry when she tries to review his games with him. Their marital tensions are convincing, but the resolution less so. After the viewer watches a relentlessly crabby and moody Ed for the first half of the film, his sudden embrace of Cathy’s career in the second half is as inexplicable as it is welcome.

The real-life Macs, like those of the film, faced the loss of their gym to a fire, the embarrassment of old, blue, box-pleat tunics as uniforms and financial shortfalls at Immaculata, a school founded by the Sisters, Servants of the Immaculate Heart of Mary in 1920. On top of that, basketball, as one character points out, is not considered ladylike. While watching the film, it is not hard for the viewer to root for the girls as a team, but seeing the characters as more than the issues they represent can be difficult. Occasionally, expository or inspirational dialogue takes the place of the kind of character development and team banter a viewer needs to connect with individual characters. As individuals, they can seem one-dimensional, only hinting at the potential of the real-life Macs, who continued to have an impact on the game, their school and the world long after graduation.

The real women included Marianne Crawford Stanley, who guided Old Dominion to three national titles and became a coach in the W.N.B.A.; Denise Conway Crawford, who was honored for her contributions as a youth basketball coach; Judy Marra Martelli, who raised over $5 million for cancer research through an organization called Coaches vs. Cancer; Rene Muth Portland, who coached the Penn State women’s basketball team for 27 years; and Teresa Shank Grentz, who coached at Rutgers University and at the University of Illinois for 13 years before returning to Immaculata, where she now holds the title of vice president for university advancement.

The Macs won the national championship in 1973 and 1974 as well, but the school chose not to offer athletic scholarships to its women, even after Title IX required this of co-ed institutions, and top players were inevitably lured to schools with more resources. Nonetheless, when Rush retired in 1977 her record was 149 and 15. The school is now a co-ed institution known as Immaculata University, and the women’s basketball team plays in Division III.

The film is at its best when Chambers trusts the emotion and the action of the story to carry a scene. Every sports film must have those moments, backed by a swelling score, in which the team’s growth, victory or defeat is best played out on the faces of the players and the fans. In that arena “Macs” does not disappoint. The camera often circles the girls at practice, emphasizing their growing sense of unity. And one scene, in which the team truly unites at an early-morning practice session in a sunlit gym, makes you want to break out your sneakers and start practicing free-throws. The use of light and shadow as the team returns on a bus on a dark night after a tough loss, with streaks of moonlight and tears across their faces, is particularly compelling. And when the camera pans across a smiling crowd of classmates lining multiple levels of the school’s rotunda to cheer on their team, you can’t help but cheer along.

The crowd of supporters rejoicing at the final game makes for a great Hollywood ending, but the real-life Macs had to wait until they arrived home to celebrate with supporters. Only five of the team’s fans made it to the game itself, but hundreds filled the airport to greet the victorious team upon their arrival home.

In the film, the sisters line the bleachers as religiously as they do the pews. It seems at first like a sweet trope, created for the novelty of amusing viewers unaccustomed to seeing religious women outside of a church, but the real-life I.H.M. sisters were just as dedicated—probably more dedicated—than their counterparts in the film. Fans would arrive at the game to see rows of sisters in full habit, banging on empty buckets and praying with their rosary beads—an intimidating sight for any opponent. Remarkably, the buckets do not factor into the film, but the sisters’ onscreen enthusiasm is contagious. As a whole, “Macs” does not reach the level of success attained by the team whose story it tells, but you find yourself rooting for it, just the same.

Show Comments (
1
)
Comments are automatically closed two weeks after an article's initial publication. See our comments policy for more.
Boreta Singleton
8 years 4 months ago
Thanks Kerry for your review. I am proud to say that Immaculata is my alma mater; although I attended school there shortly after their victory, the "Mighty Macs" always loomed large in our life in school. I was never athletically inclined, but we musicians had a great relatonship with our basketball classmates. We cheered at their games and they attended our concerts! The team always exhibited a wonderful spirit. I can't wait to see the movie!
Advertisement

This article also appeared in print, under the headline “Immaculata's Miracle,” in the October 24, 2011, issue.