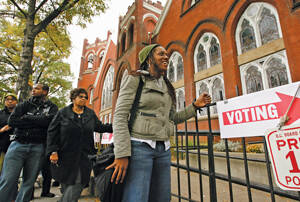 Despite calls from Catholic conservatives for a substantial rewrite of the statement “Forming Consciences for Faithful Citizenship” published in 2007, the U.S. bishops reissued the document on political responsibility unaltered on Oct. 4. The statement, however, does include a new introduction warning that “Faithful Citizenship,” one in a series of documents that have been issued before every presidential election for nearly 35 years, “has at times been misused to present an incomplete or distorted view of the demands of faith in politics.” The new introduction reminds U.S. Catholic voters that some issues “involve the clear obligation to oppose intrinsic evils which can never be justified,” while others “require action to pursue justice and promote the common good.”

“Faithful Citizenship,” according to the new introduction, “does not offer a voters’ guide, scorecard of issues or direction on how to vote,” but “applies Catholic moral principles to a range of important issues and warns against misguided appeals to ‘conscience’ to ignore fundamental moral claims, to reduce Catholic moral concerns to one or two matters, or to justify choices simply to advance partisan, ideological or personal interests.”

The introduction lists six “current and fundamental problems, some involving opposition to intrinsic evils and others raising serious moral questions.” They are: abortion “and other threats to the lives and dignity of others who are vulnerable, sick or unwanted”; conscience threats to Catholic ministries in health care, education and social services; intensifying efforts to redefine or undermine marriage; an economic crisis that has increased national and global unemployment, poverty and hunger; “the failure to repair a broken immigration system”; and “serious moral questions” raised by wars, terror and violence, “particularly the absence of justice, security and peace in the Holy Land and throughout the Middle East.”

Deal Hudson, president of Catholic Advocate and a frequent adviser to Republican candidates, had been among those pressing bishops to tighten the language in “Faithful Citizenship.” In an open letter to the bishops in July, Hudson wrote: “If the bishops republish...‘Faithful Citizen-ship’ for the 2012 election—without changes—they will be providing Catholic voters another carte blanche to cast their vote for any pro-abortion candidate they want.” All the same, Hudson pronounced himself satisfied with the cautions included in the introduction to the unaltered reissue, calling it “a positive step toward clarifying some of the ambiguities that were advantageously spun by some seeking to water down church teachings for their own agenda.”

From a different perspective, John Gehring, the Catholic outreach coordinator at Faith in Public Life, was “pleased the bishops have again affirmed that Catholics should not be single-issue voters.” Gehring said, “This document reflects the fullness of church teaching in ways that will surely challenge both liberals and conservatives. But at a time when the radical individualism and anti-government ideology espoused by the Tea Party and Religious Right clash with the communitarian values of Catholic social teaching, the bishops have presented a strong case for a politics of the common good and a government that takes a proactive role in caring for all its citizens.”

While both men may be concerned that Catholics may be drawing the wrong conclusions from “Faithful Citizenship,” U.S. bishops should perhaps be worried that most Catholics are not drawing any conclusions at all from their guidance. A recent poll conducted by Georgetown University’s Center for Applied Research in the Apostolate found that just 16 percent of U.S. Catholics had even heard of the bishops’ document, and a mere 3 percent reported they had read it.