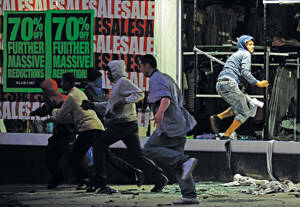 People at an East London community meeting in August worried that the problems laid bare by the riots are too deep-seated to be dealt with easily or soon and that the breach between young people and wider society may now become irreparable. Rates of divorce and family dysfunction in Britain are at record levels. A growing proportion of families are dependent on state benefits. More than 600,000 young people under age 25 in Britain have never done a day’s work in their lives, but they are no longer pursuing an education. Where might they look for models of moral constraint? Not to the state. If there was one consistent message from the rioters, it was their hatred for the police and the public authorities who, in the vacuum of family and institutions, loom large in their lives.

The justice secretary, Ken Clarke, said in September that three-quarters of the convicted rioters over 18 are “known criminals…a feral underclass, cut off from the mainstream in everything but its materialism.” He used the figure to make his case for reform of prisons, which he said should focus more on rehabilitation than on punishment alone.

But the idea that the riots were a revolt by the “criminal classes” distorts as much as it reveals. A very large proportion of the rioters were under 18, while most of those detained, primarily as a result of police poring over closed-circuit television footage, were already known to the police and therefore most likely to be arrested. True, gangs and criminals were the chief organizers of those nights of chaos. They put aside their rivalries and joined forces, using BlackBerry messages to galvanize networks of young people to gather at targets they had identified—typically brand-name stores selling sportswear and gadgets.

But many of the rioters were far from being career criminals. Even in white-stuccoed Pimlico, where members of Parliament retire to pied-à-terres after late-night debates, youths from a bordering housing estate looted the Hugo Boss store in nearby Chelsea and set alight garbage bins to keep the police at bay. That was a sideshow compared with the conflagrations involving hundreds in London’s Croydon and Brixton neighborhoods, but it made the news when a few days later, dozens of police publicly smashed down doors on the estate to arrest some of the looters. One of them, Angolan-born Mario Quiassaca, 18, was marched away, together with bags of Hugo Boss shirts, under the gaze of invited television cameras.

When Mr. Quiassaca later appeared in court, he was revealed to be a promising young man, a semi-professional footballer in his third year of studies at a decent local college. Asked to explain, he could speak only of his resentment of the police.

The riots had exposed a deeply unorganized society, where the bonds of trust and the vigor of institutions are weak, in which young people are prone to the “mimetic rivalry” of consumerism yet powerless to attain the objects of their desire—except by looting. Most of the rioters were disconnected from both market and civil society and therefore drawn, in chaos, to the only organized leadership around them, that of the gangs.

What most concerned residents who discussed the riots at that East London community meeting in August were the thousands of young people like Mr. Quiassaca, drawn into the violence, grabbing “free stuff” at the urging of the gangs. But churches and social institutions include young people who can identify with and find their lost peers, says Derron Wallace, an organizer of the group London Citizens and a youth worker in an evangelical church in southeast London. The civic crisis is “an opportunity now for churches to reach out beyond their four walls.”

Beyond the problem of Britain’s disconnected youth is something deeper, something that the sober analyses of both left and right have implicitly acknowledged but cannot yet name: the failure of the liberal project. A democracy geared to the peaceful coexistence of differences and a market dedicated to the expansion and satisfaction of individual desire cannot alone generate the values and virtues on which a functioning society depends. The egotism and criminality of the “feral underclass” mirror a “feral elite”—bankers, politicians, business executives, journalists—who have looted their own institutions for private gain. Who can generate sobriety, frugality and self-restraint? Who can muster the energies for a common purpose of social regeneration?

The government, energized, feels vindicated by the riots, which have bolstered the Conservative case for the “Big Society.” This is a government now committed to tackling not just the financial deficit but the “social deficit” as well. The riots, Prime Minister David Cameron said on Aug. 15, must now force Britain to deal with the explosion of “social problems that have been festering for decades.” His speech opened the sluice gate to a flood of initiatives and reforms: a gang task force advised by the former police chief of Los Angeles, Bill Bratton; a national citizens’ service for 16-year-olds; education reforms to prevent failing schools; toughening social security; policies to bolster the family; and so on. This is not just about reforming the way the state acts on society but about helping to encourage stronger communities, stronger families, greater social responsibility and civic leadership.

But the Big Society agenda shies away from the deeper cultural question of where future sources of values and virtues will be found. Culture needs to be shaped by ethical criteria that are not of its own making, criteria traditionally supplied by the major faith traditions. Pope Benedict XVI’s call in his address to Parliament a year ago for culture—“the world of secular rationality”—to open itself to “the world of religious belief” now seems especially timely.

Churches and faith congregations in north London are holding their own “citizens’ inquiry” into the origins of the riots through public hearings, at which the voices of both “the looters” and “the looted” will be heard. And London Citizens is looking to expand a community-based scheme they have pioneered over the past three years, based on experiences in cities in the United States, like Baltimore.

CitySafe brings faith congregations into relationship with local businesses, schools and the police, creating in effect a civil-society gang to counter the power of the criminal gangs. Next year, six weeks before the Olympic Games begin in London, London Citizens and Catholic Church leaders will announce “100 Days of Peace,” reviving the ancient Olympic idea of a truce. They will hold town hall meetings in boroughs across London and Birmingham to use the games as an opportunity to establish more CitySafe sites and zones as safe havens.

Here is the hope amid the ashes: acceptance that the old binary model of state and market is exhausted and that the vision and energies of civil society must now be engaged. But will it be enough, soon enough?

Austen Ivereigh is the co-author, with Kathleen Griffin, of Catholic Voices: Putting the Case for the Church in an Era of 24-Hour News.

@austeni
Show Comments (
1
)
Comments are automatically closed two weeks after an article's initial publication. See our comments policy for more.
John Kleinsman
10 years 7 months ago
Austen Ivereigh is spot on in his view that in London and in many other citiies gangs now fill the need for meaning and belonging that Western Culture once assigned to faith and family.  It's of interest that this issue of America contains articles on both the Arab Spring and the London riots.  These nearly simultaneous events also coincided with the million-strong World Youth Day in Madrid in August.  I wrote of these simultaneous events and contrasted them in "Faith Trumps Relativism" at www.TheseStoneWalls.com, and arrived at the same point made by Austen Ivereigh, albeit without his great skill.