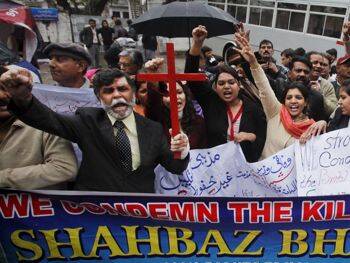 Pakistan has abolished its Federal Ministry for Religious Minorities as part of a larger plan of government decentralization approved by the Parliament of Pakistan in February. The move against this specific ministry had been delayed at the urging of the Minister for Minority Affairs Shabhaz Bhatti before his assassination on March 2.

A source in the Pakistan government said the decision to proceed with the ministry’s closing was like killing Bhatti “a second time.” According to the plan, the responsibilities of the ministry will be devolved from the federal level to the provincial level. But this source worried that in practical terms that may mean "removing from the agenda of the central government issues related to minority rights.

"So this kills … Bhatti a second time: the first was his physical elimination, the second is to eliminate his project and his political legacy on which he had dedicated so much time."

The current Minister of State for Minorities, Ackram Gill, like Bhatti a Catholic, protested the ministry’s abolition. Gill led a delegation of parliamentarians and politicians in a discussion about the matter with Pakistan Prime Minister Raza Gilani and organized a protest of Hindus and Christians outside Parliament.

The decision provoked concern and bewilderment among the nation’s religious minorities. "We are disappointed and saddened,” said a Lahore priest, who worried that “the rights of Christians will be put further into obscurity and disappear from the national political agenda.

“We will be even more helpless,” he said. “For the fundamentalists this will be a 'green light' to new aggression, violence and persecution against Christians.”

According to Gill, Prime Minister Gilani assured him that a new federal ministry for interfaith harmony and human rights will be created that would be committed to safeguarding the rights of minority religious groups in Pakistan. The Federal Ministry for religious minorities had been led by Bhatti since it was created in 2008 by a newly elected government led by the Pakistan Peoples Party.

Bhatti was gunned down as he left his mother's home in a residential area of Islamabad after many threats against his life inspired by his frequent public criticism of Pakistan’s blasphemy law. That measure, according to many, has been frequently abused in settling personal scores or suppressing minority rights via trumped-up allegations of blasphemy by non-Muslims against the Koran or the prophet Mohammed.

Regarding Bhatti’s assassination, some progress has been reported. The commission of inquiry organized by the Pakistan’s Interior Minister Rehman Malik said last month that the murder was organized by the "Brigade 313" of Al Qaeda, known as the "ghost army," led by the Pakistani Taliban leader Ilyas Kashmiri. The commission found that a commander of the Taliban in Punjab, Asmatullah Mawaia, issued the order to eliminate Bhatti, and the plan was executed by elements of the extremist group Tehrik-e-Islami.

Paul Bhatti, the brother of the slain minister and currently a special advisor to the prime minister for religious minorities, expressed relief that progress has been made in identifying his brother’s assassins. He said international arrest warrants have been issued for some of the perpetrators of the killing who may be in Dubai. "The investigations into the murder of my brother Shabhaz are finally on the right track,” he said.

“It is the work carried out by the Taliban and Islamic fanatics. After the sidetracking of the inquiry and attempts of reducing the charge of murder due to personal enmity, slinging mud at my brother, the truth is emerging,” he said. “We were convinced that he was killed for his commitment to human rights, the rights of Christians, for the brave denunciation against the blasphemy law. Now the investigation proves us right.

“We are hoping for a rapid conclusion, with the capture of the perpetrators of the crime,” Bhatti said. “It would be a good sign for the health of the state of law in Pakistan."