Faith Healing: From the boardroom to the emergency room 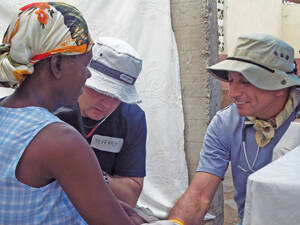 In the summer of 2004 I was the vice chairman and chief information officer of a Fortune 500 financial institution. I led an international organization that consisted of approximately 8,000 people. Corporate jets, private dining rooms, first-class clubs and meetings at world-class resorts were all part of the package. My plan was to work several years and retire comfortably. But as Woody Allen once said, “If you want to make God laugh, tell him your plans.”

Despite my privileged lifestyle, I felt restless and uneasy. Every day I asked Jesus to give me the wisdom to know his will and the courage to do it. The answer came that autumn in the form of an overwhelming desire to retire and become an emergency medical technician. I knew I would sacrifice anything to follow the Lord’s will, and somehow I knew this was it. Early in 2005 I announced my plans to a shocked chief executive officer and board of directors. By August, I was enrolled in an E.M.T. class.

For the past five years, I have worked part time in Pennsylvania and in South Carolina responding to 911 calls for E.M.S. organizations. I have spent thousands of hours in ambulances treating hundreds of patients. So much for my original plan for retirement.

I do not deal with change very well, and the summer of 2005 brought plenty of it. I left my comfort zone, retired and began E.M.T. certification. I battled doubts: What if I failed? What if I could not get my certifications? What if I could not cope with the trauma, crises and pressure of 911 calls? What if the skeptics who told me I was crazy were right? The words of that noted comic book character/philosopher Pogo, came to mind: “The certainty of misery is preferable to the misery of uncertainty.”

I reaffirmed my decision to stay the course, retire and go to school. In the midst of the uncertainty, I experienced an uncharacteristic peace, calm and focus. I was comforted by the many times Jesus had said not to be afraid, to trust him. Over the years, Jesus has helped me answer the fundamental question of why I am doing this. Jesus did not appear, call, text or send me e-mail, but I felt his answer: “Trust me totally; become humble and spread my message of love, healing and forgiveness.”

I began riding on ambulances as a trainee and received my certifications in February 2006. Responding to 911 calls was and continues to be one of the most humbling and challenging things I have ever done. I went from being the most senior person in the boardroom to the rank of rookie in the ambulance. I considered a shift a success if I did only one dumb thing. The majority of the heroic and dedicated people with whom I worked were younger than my children.

After the earthquake in Haiti, I joined a medical rescue and relief team to help there. When asked why I wanted to go, I said, “I want to bring the light of the face of Jesus into the darkness the Haitian people had experienced.” But when I arrived, I saw that although many Haitian people had nothing—no money, no homes, no food—they still had a sense of joy that comes from an unshakable faith.

A group of Haitian men built us a shelter made of tarps and poles to keep us out of the sun. These men disassembled their own homes to provide the materials. The victims of this terrible tragedy did not complain or blame. I joined them in healing and in prayer. When I returned home, I realized how arrogant my intentions were. The Haitian people had brought the light of the face of Jesus into the dark places in my soul.

Over the years I have realized that as important as emergency medical interventions are, kindness, gentleness and compassion can also heal in other ways. Holding a sobbing biker who had attempted suicide because of life’s failures, praying with the family of a 15-year-old who was seriously injured in an accident or holding the hand of a frightened elderly woman on the way to the hospital are ways Jesus spreads his message of love, healing and forgiveness.

I am privileged to pray with and for seriously ill patients in ambulances and emergency rooms. When leaving a patient’s bedside, I place my hand on his or her shoulder and say, “Good luck and may God bless you.” I have said this to a 95-year-old Catholic nun, an incarcerated double murderer and a male witch, among others. The most common response is, “God bless you, too.”

A reporter once asked me the major difference between my prior job as a corporate vice chairman and my current role as an emergency medical technician. I responded by explaining that my corporate job was what I did, but my current job is who I am. There are many ways to prove Jesus’ love and mercy. Using a broken soul like me to do his will also proves that God has a sense of humor.