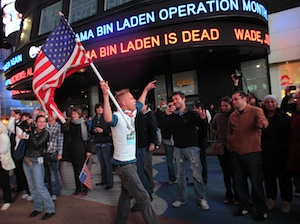 The Christian and Bin Laden

It was natural to feel elation over news that the reign of terror and mayhem managed by Osama bin Laden was coming to an end. The jubilant crowds that gathered spontaneously across the United States expressed just such emotions. But the Christian heart recoils from celebrating the death of a fellow human being, no matter how evil.

During Lent and Easter, Christians recall Jesus’ forgiving his executioners from the cross. Forgiveness is the hardest of all Christian acts; it is also meant to have no limit. “Not seven times,” said Jesus to Peter, “but, I tell you, seventy-seven times.” This does not negate the place of justice in God’s eyes, for such a denial would mean believing in a God who does not care about human affairs. But judgment and punishment, says Jesus, is up to God.

This is a “life” issue as surely as any other. The Christian is in favor of life not simply for the unborn, for the innocent, for those we care for or even for those whom we consider good, but for all. All life is sacred because God created all life. This is what lies behind the command “Love your enemies and pray for those who persecute you.” It informs Blessed John Paul II’s forgiveness of his would-be assassin in 1980. And it informs the Vatican’s statement about Bin Laden: “In the face of a man’s death, a Christian never rejoices, but reflects on the serious responsibilities of each person before God and before men, and hopes and works so that every event may be the occasion for the further growth of peace and not of hatred.”

What investor would hold back from a $603 million investment if it would almost surely earn $4 billion? The answer: only an investor ideologically committed to budget cuts rather than to increasing revenue. Could today’s budget slashers be that myopic? Judge for yourself. In April 2011 House Republicans failed in their efforts to cut $603 million from the budget of the Internal Revenue Service. Had they succeeded, that supposed saving could well have cost taxpayers a fortune—$4 billion in uncollected revenue from the I.R.S., according to Commissioner Douglas Shulman.

Shulman ought to know. In recent years he has led I.R.S. efforts to examine the tax compliance of individuals with assets of at least $30 million. Finding tax evaders at this level earns a high return for the I.R.S. Each year billions of taxable dollars go unreported, hidden in offshore investments and foreign accounts. In 2009 the I.R.S. sponsored its second offshore amnesty program offering reduced penalties (no prison time); some 18,000 taxpayers came forward. The effort brought in billions, at $200,000 per case on average. Still, when the I.R.S. asked Congress for a budget increase of $486 million to improve enforcement, their budget was cut instead to $12.1 billion, which is a smidgen less than the agency’s 2010 budget.

Why should government cut any “investment” that promises such a high return through existing tax law? And there’s more. Finding violators also promotes fairness and may deter tax evasion. Congress will have another chance to make the right choice: The president’s proposed 2012 I.R.S. budget seeks $13.3 billion, with most of the increase for enforcement. That is an investment well worth the cost.

It is not often that one reads end-time prophecies in a business journal. But a recent issue of Fortune depicted the perhaps permanent end of the era of cheap commodities—metal, energy and food staples—with the kind of apocalyptic language usually reserved for talk about the Second Coming. Commodity prices had been in a steady decline for a century until 2002, when they started back up. In recent months the reversal of that century-long trend has been complete, and commodity prices have entered uncharted territory. Anyone with rubber on the road knows the lamentable tale told at the gas pump. Copper, a manufacturing building block, has moved from $1.30 per pound in 2008 to a record $4.60 in February. Food commodity spikes now threaten to force 64 million people in Asia into poverty. Increasing global demand, poor harvests, bad weather and plain old hoarding have all contributed to the escalation of commodity costs. Market speculation and the monetary policies of the U.S. Federal Reserve Bank, seeking to outsource some of the nation’s economic pain, also play a role.

How to respond? Doing nothing has its charms. A slowing economy in China and a decent U.S. harvest would be enough to burst this commodities bubble. But even a significant reversal would not interrupt the long-term upward trend. To respond most justly, people throughout the affluent world—and among the newcomers China, Brazil and India—might reconsider the Western lifestyle model: overconsume now and later find a way to avoid paying. The United States would make a good start at a serious re-evaluation of such profligacy by reducing the structural supports, for instance those within the U.S. tax code, that make it possible. The world cannot afford to subsidize the U.S. standard of living any longer.

The Editors
Show Comments (
3
)
Comments are automatically closed two weeks after an article's initial publication. See our comments policy for more.
Mike Evans
10 years 4 months ago
The critical but incorrect assumption being made is that the rise in commodity prices has something to do with supply and demand. A quick review of oil production figures should dispell that myth. It has mostly to do with speculation and hoarding as well as market gaming by both producers and consumers. Copper has not suddenly become nearly 4 times as scarce or needed as in 2002. It has been gamed and the only people making money on it are speculators who control its measured supply. Please do not equate this with apocalyptic language or predictions. We as humans can control our prices as long as we do not surrender to the almighty so-called free markets which are just a euphemism for legalized piracy and price fixing. Reread your Econ 102 texts on oligopoly controls.
C Walter Mattingly
10 years 4 months ago
While commodity speculators make various markets more volatile in the short run and vulnerable to short-term ups and downs-witness this week's 30% drop in the price of silver-they have little impact on the long term direction of markets. Not so the terrible and destructive long-term subsidies the government has placed that harm us all-the ethanol subsidies which do nothing for global warming, profit mostly rich farming corporations, and drive up grain prices, thereby harming the world's poor; tobacco subsidies, through which taxpayers subsidize poisoning our citizenry; sugar subsidies, which guarantee profits for US producers whose product contribute to our greatest health epidemic, obesity, etc. America is on target by calling for "reducing structural supports" as "the world can no longer afford to subsidize the US standard of living any longer." Nor, I would add, can the US taxpayer.
John Walton
10 years 4 months ago
I don't understand which "structural supports ... within the tax code" promote higher prices.  I do note that farm subsidies promote higher prices, restriction on the marketing of products (like milk in NYC) lead to higher prices, that land set-asides promote higher prices.  I know that 40% of the corn crop is now devoted to ethanol production instead of tacos and HFCS.  Perhaps you were referring to the estate tax laws which result in family farms being sold to corporate farmers.

I wonder too if this is not the "born yesterday" era of editorial journalism?  In my brief lifetime, I have heard "The end of the era of low commodity prices" posited by serious economists at least 4 times.  It doesn't help that the amount of currency in circulation has increased at an annual rate of 8-10% in the past year, that the monetary base has increased by 25% in a year.  While the link between monetary policy and prices is long and variable, it is ineluctable.

China is out of arable land, the desert continues to encroach and the drought is troubling to every Chinese business person I deal with, perhaps more troubling to Chinese leaders who have to contend with the notion of social unrest springing from high food prices.  China has, however, an easy solution which they are reluctant to grasp - import foodstuffs from the U.S., Canada and Brazil.