The Good Fight: How Christians suffer, die and rise with Jesus 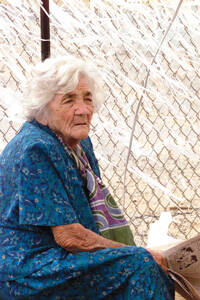 In the early 1960s, when the racial struggle was white-hot, an interracial retreat was held at my monastery, Subiaco Abbey in Arkansas, sponsored by Friendship House. One participant was a recent college graduate at work in voter registration in the Mississippi delta area of eastern Arkansas. In conversation we asked him, “Isn’t that dangerous work you’re doing? We hear the reports of hatred and violence.”

“It’s true,” he said. “The hatred is vicious, and the punishment is violent.”

“Have you ever been hurt yourself?”

“Yes, I’ve been spit on, beaten with fists, with pipes, with chains and left a bloody mess.”

“But you’re pretty big. Weren’t you able to protect yourself sometimes, to fight back?”

“Yes. At first I did fight back. I made some of them sorry they had attacked me. But then I realized that by fighting back I wasn’t getting anywhere. The hatred coming at me in those fists and clubs was bouncing right off me back into the air, and it could just continue to spread like electricity. I decided I would not fight back. I would let my body absorb that hatred, so that some of it would die in my body and not bounce back into the world. I now see that my job in the midst of that evil is to make my body a grave for hate.”

We were all shaken by what this young man said. But what he was describing was the Gospel of Jesus.

We do not fight evil with evil. As Paul wrote to the Romans, “Do not be overcome by evil but overcome evil with good” (12:21). The young man’s insight was profound, and his courage was great. But even his insight into what he was doing does not quite capture the majesty of the Gospel of the death and resurrection of Christ in us. Because when we make our bodies a grave for hate, the evil that we absorb does not simply die. If we accept suffering in union with Christ, it becomes the dying of Jesus in us, and by the power of the Holy Spirit it is transformed into resurrection. Instead of simply dying and no longer having an evil effect, what attacks us as sin returns to the world as grace.

In St. Paul’s writings there are three kinds of death: physical death, the common lot of all; sin, a step on the road to eternal death; and redemptive death, which leads to life. In Jesus, without sin, the first and third types of death coincided perfectly. His physical death became the sacramental sign of his interior death.

We Christians, Paul says, are baptized into Christ’s death. At baptism we began a lifetime of growing into redemptive death with Jesus. We empty ourselves of ego and self and lay down our lives in love and obedience as he did. As we move toward physical death, our interior death should also be taking place. We have no choice about physical death, but the other type is up to us: We decide whether we will die with Jesus.

We are not doomed by our circumstances. The choice is ours. Will we live from our heart with Christ, pouring ourselves out in love? Or will we shield ourselves from the world’s pains in fear and self-protection? Sometimes when I visit a person in a nursing home who is in a desperate condition, I am overwhelmed by the faith and peace that come from that person’s smiling eyes. Love pours forth from the dying of Jesus within. I recall Hemingway’s description of the fisherman Santiago: “Everything about him was old except his eyes and they were the same color as the sea and were cheerful and undefeated.” I return from the nursing home as if I had made a retreat.

As the interior death grows, resurrection life also grows. Death and life are intertwined. Paul puts this beautifully: “Always carrying about in the body the death of Jesus, so that the life of Jesus may also be made visible in our body. For while we live, we are always being given up to death for Jesus’ sake, so that the life of Jesus may be made visible in our mortal flesh” (2 Cor 4:10-11). The word for “death” here is used only twice in the New Testament, both times by Paul, and it carries the nuance of “dying.” We carry about in our living bodies the dying of Jesus.

Where there is this kind of dying, there is always the resurrection, the living of Jesus. And where the dying of Jesus is not happening, Paul says, neither is the resurrection happening, no matter what kind of show we put on. “If I speak in the tongues of mortals and of angels, but do not have love, I am a noisy gong or a clanging cymbal” (1 Cor. 13:1). The life looks all right, but it sounds tinny. There is nothing to back it up.

Love as a Dying

During his public ministry, Jesus quoted the ancient proverb, “Do to others whatever you would have them do to you” (Mt 7:12), but he set a higher standard with his new commandment: “Love one another as I have loved you” (Jn 14:34). The norm for love among Jesus’ disciples is laying down one’s life for others as he did. This was not only a single act at the end for Jesus but his life program, and now it is the program for his disciples. In Paul’s terminology this is “carrying about the dying of Jesus” (2 Cor 4:19) or being “crucified with Christ” (Gal 2:20).

We see the love, but ordinarily we do not see the inner dying of Jesus that supports it. That is the way it has to be. St. Maximilian Kolbe and Archbishop Oscar Romero were able to make the ultimate sacrifice—martyrdom—at the end of their lives because in a mostly hidden way they had been dying with Jesus in love for others moment by moment, inch by inch, drop by drop in the time before.

The dying of Jesus is lived in secret. Even when we see another person suffering patiently, we cannot see his or her interior decision for love. But what becomes evident if we are dying with Jesus, whether we are conscious of it or not, is the resurrection light that begins to shine. We keep hidden our pain, our suffering, the injustice we suffer, the loneliness, the bitter disappointments in other people, ourselves, the church. We do not hide the good we do, but we do not parade it either. We rely on Jesus to be with us as we walk with him on our own road to Calvary.

Often, however, we prefer the reverse: to advertise the interior dying and to hide the resurrection. We want everyone to know about our pain, our stress, our hard work, the way we are misunderstood and the sacrifices we make. Yet we are embarrassed to show a resurrection face to the world, because if we smile people might think we are naïve. What’s the matter with you; don’t you know how bad it is? We fear to expose the subterranean river of joy that flows within us.

But when we spoil our interior dying by parading it, it loses its transforming power. Jesus himself speaks of a grain of wheat that must die in the ground or it will never sprout and give life. The dying has stopped, and there is no resurrection. In another image, Jesus speaks of the foolishness of sounding a trumpet when giving alms or of praying on a street corner to get attention: “Truly I tell you, they have received their reward” (Mt 6:2). And as Georges Bernanos’s country priest says: “When our suffering has been dragged from one pity to another, as from one mouth to another, we can no longer respect or love it.” In Paul’s view, when we haul our suffering onto the public stage, it decays.

We ought never to hide the signs of the Resurrection, which Paul calls the “fruit of the Spirit”—love, joy, peace, patience, kindness, generosity, faithfulness (Gal 5:22). That is the difference in the way death and resurrection are lived: the dying is the backdrop for the resurrection, which, by contrast, is a public gift to the world, a light on a mountaintop, the light of hope. The world knows well enough the realities of spiritual death: sin, hypocrisy, injustice, hatred and violence; it can create those for itself. But the world will see the Resurrection only through disciples who interiorize the dying of Jesus. There is no other source.

Faithful disciples of Christ, including those who pass long lonely days in a hospital or nursing home after decades on the front lines, need to know that they are still fighting the good fight and that by offering their suffering as the dying of Jesus in them, they are transforming the world. That college student in Arkansas who let his own body absorb racial hatred also seemed to understand this.

It is said that an earthquake often begins when a sliver of rock is dislodged deep in the earth. The surrounding mass adjusts slightly, which starts a chain reaction of larger adjustments until on the surface there is a cataclysm. The faithful disciple who joins his or her suffering to Christ is a sliver of rock upsetting the sinful structure of the world.

Jerome Kodell, O.S.B., is the abbot of Subiaco Abbey in Subiaco, Ark.

Show Comments (
1
)
Comments are automatically closed two weeks after an article's initial publication. See our comments policy for more.
11 years 5 months ago
Thank you so much for this piece!