Skip to main content
Signs Of the TimesApril 18, 2011 issue

Is Restorative Justice Possible in Aftermath of Scandal? 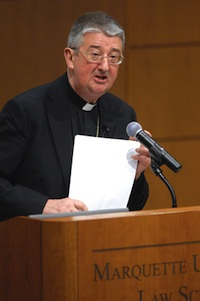 In a frank address to participants at a conference in Milwaukee, Wis., on April 4, focusing on the church’s sexual abuse crisis, Archbishop Diarmuid Martin of Dublin described how the church could achieve justice in the aftermath of this devastating global scandal. “Restorative justice is not cheap justice,” he said. “It is not justice without recognition of wrongdoing, without putting the balance right. Restorative justice may possibly even be about forgiveness, but again not about cheap forgiveness.”

He asked, “What does restorative justice mean for victims?

“This is the challenge which haunts me,” the archbishop said. “I wish that I could promise that magic term ‘closure’ to victims. But I am aware that even saying that can be offensive to survivors. I cannot determine when they find closure. There is no fast-track healing.... I cannot achieve healing by decree.....”

“Spectacularly wrong” was his assessment of the Archdiocese of Dublin’s handling of priest-abusers and of victims who summoned up enough courage to come forward. In the aftermath of the crisis in Ireland, he said, “I still cannot accept a situation that no one need assume accountability in the face of the terrible damage that was done to children in the church of Christ in Dublin and in the face of how that damage was addressed.”

During the speech, which was given at a conference titled “Harm, Hope and Healing,” held at the Marquette University Law School, Archbishop Martin charged that the church has yet to address fully problems of clericalism and pathology within its seminaries that contributed to the scandal. More important, Archbishop Martin said, was recovering the notion that the direct victims of the abuse needed to be the focus of healing.

“A church which becomes a restorative community,” he said, “will be one where the care of each one of the most vulnerable and most wounded will truly become the dominant concern of the 99 others, who will learn to abandon their own security and try to represent Christ, who still seeks out the abandoned and heals the troubled.” But before any true healing could begin, he said, victims needed to perceive true remorse on the part of their abusers. Archbishop Martin admitted he had encountered little evidence of such remorse himself.

“I feel that I can honestly say that with perhaps two exceptions, I have not encountered a real and unconditional admission of guilt and responsibility on the part of priest offenders in my diocese,” he said. “It is very hard to speak of meaningful forgiveness of an offender when the offender refuses to recognize the facts and the full significance of the facts.”

Efforts to cover up the abuse and protect the institution only made the scandal worse. “We have to learn that the truth has a power to set free which half-truths do not have,” he said. “The first condition for restorative justice is that all parties are willing to tell the truth and to take ownership of the truth, even when the truth is unpleasant.

“As I said at a recent liturgy of lament in Dublin,” he continued, “the truth will set us free, but not in a simplistic way. The truth hurts. The truth cleanses not like smooth designer soap, but like a fire that burns and hurts and lances.”