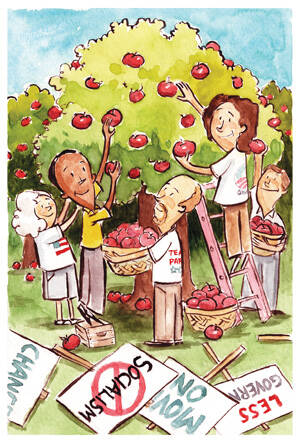 I was maybe 9 when Dad sent me to my room for announcing at the dinner table, “Jesus is a liberal.” Dad was a conservative sort, fond of phrases like “welfare queen” and “love it or leave it.” He managed to sire three children who saw the world as he did. Then I came along, so different from the rest that I sometimes believed the stories my sister told about finding me on the doorstep. But I have Dad’s nose and Mom’s green eyes. There is no doubt I am a homegrown little Bolshevik.

One hears a lot lately about the polarization in the United States. I grew up with political polarization, and it has often been unpleasant. I have screamed and been screamed at. I have spent most of my life trying to convince my siblings how very wrong they were about absolutely everything. They have quaintly persisted in their beliefs and actually tried to convince me that I was wrong. You can guess their success.

Such endless arguments are not a whole lot of fun. Eventually I looked for excuses to avoid family gatherings. That became much easier when my mother became too old and frail to organize them. I spent free time hanging out with my friends, talking about that interesting story we had heard on National Public Radio or the great new place in town to get fair-trade cocoa. Nobody complained about taxes or spoke disparagingly of less developed countries—guiltily sometimes, but never disparagingly. It was entirely pleasant.

But I missed my family.

Strange though it may seem, you can hate everything a person stands for and still love the person. It is not an easy or comfortable love, but why should love be either of those things?

I started showing up at Thanksgiving again. The family consensus seems to be that no one is going to convert anyone at this point, so we don’t speak about politics, which includes world affairs, the environment, sexuality, taxation, the character of poor people, race relations, the quality of our public schools.... It is a long list.

So what’s left? We can talk about our mother’s devil’s food cake. No one ever got Mother to write down the recipe, so its exquisite texture and aroma live only in our shared memory. We can talk about how Uncle Tom pretended the family was actually a Cub Scout troop in order to get into Yale football games for free; about working at the restaurant with Mom, after which it took two shampoos to remove the smell of grease from our hair; about Prince, a dog big enough and gentle enough to ride.

These are not topics of national import, but they are not nothing either. Maybe someday we will be comfortable enough to talk politics again. I am really not sure. I am not even sure it matters.

The point of this little dispatch on family dynamics is simply this: People of all persuasions are first and foremost people. When we forget this, it is easy to be rude—or worse. I sometimes think that the best thing this country could do is to ignore the problems it faces, just for a day. Send the Tea Partiers and the folks from MoveOn.org apple-picking together with the express understanding that they not discuss sustainable agriculture, global warming or any other “newsy topics” the trip might bring up. Or maybe have a bunch of Rush Limbaugh’s dittoheads and the Rachel Maddow crowd take in a movie, preferably a light romantic comedy, and then go out for some ice cream.

Such exercises will not erase our political divisions, but they might make them a bit less mean-spirited. And if we keep talking to each other long enough, we may even see that the things we treasure most look very much alike.

Colleen Shaddox’s essays have been featured on National Public Radio and in The New York Times, The Washington Post and many other publications. She lives in Connecticut with her husband and son.

Show Comments (
1
)
Comments are automatically closed two weeks after an article's initial publication. See our comments policy for more.
Mary McCaffery
11 years 1 month ago
Well put, Colleen.   My family, like yours, is split on political ideology and a number of matters about Catholicism and religious practices.   Admittedly, it is not always easy to have a dialogue with people whose perceptives are so different, but in the end, what matters is faith and family.