What is the Goal?: The increasingly complex intervention in Libya

What is the Goal?: The increasingly complex intervention in Libya 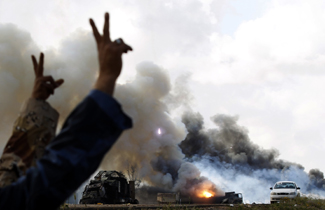 Pro-democracy protests began against the dictatorial regime of Col. Muammar el-Qaddafi in mid-February. Within days, Qaddafi resorted to force, killing dozens. Within a week, regime opponents had opted for armed conflict. The rebels gained control of Benghazi and other towns, but as Qaddafi looked set to defeat them, the United Nations Security Council adopted Resolution 1973, authorizing a no-fly zone and “all necessary means” to protect civilians.

Within days, the United States, with assistance from a few others, had established a no-fly zone. Then the United States began bombing Libyan tanks and personnel, allowing rebels to re-establish control in Benghazi.

Resolution 1973 clearly re-establishes the authority of the Security Council in authorizing the use of force. Recall that the United States had no such authorization for the use of force in Iraq in 2003 or Kosovo in 1999. Still, the resolution is a necessary step, not a sufficient one.

Under international law, the use of force must also meet the test of necessity, which requires affirmative answers to three questions: What is the lawful objective of the force? Is the use of force a last resort? Does resort to force have a good chance of succeeding? The necessity principle comes to us from the just war doctrine and is just as important as having Security Council authorization.

If any of these three questions cannot be answered clearly and affirmatively, states must look for alternatives to using force—the types of alternatives that the United States used and is using in support of other pro-democracy uprisings from Egypt to Syria.

But the very first question—what is the goal?—was still being asked by members of Congress days after the bombing began. The president at first said the action would require a “few days.” A week later, the Secretary of Defense said U.S. forces are likely be involved for months. State Department Legal Adviser Harold Koh said at a meeting of the American Society of International Law on March 26 that the mission was “limited” and “multilateral.” He did not, however, say what exactly “it” is.

President Obama told the nation on March 29 that the use of force was to stop “violence on a horrific scale.” But what the coalition stopped was the defeat of the rebels, allowing them to continue fighting. The United States has intervened in a civil war.

Resolution 1973, however, only refers to protecting civilians. Civilians are dying each day that the fighting continues. Prolonging the fighting by “helping” (as NATO now calls it) will not protect civilians. The rebels could still lose and leave themselves and their communities in even more danger than when coalition bombing began. The rebels may win, but we know virtually nothing about them. Will they be better rulers than Qaddafi? Look at the African countries that have been the scene of so much intervention over the years—Chad, Somalia, Congo, Ivory Coast. In what way have civilians been made safer by the chaos wrought through foreign military intervention?

And if we want to support the will of Libya’s people, how do we do so by determining the outcome of their internal struggle?

When I raised the principle of necessity on the same panel at the American Society meeting, Koh did not mention that he or others in the administration had even considered it. He, rather, invoked the Rwandan genocide and the Srebrenica massacre in Bosnia and said the United States must never hesitate to intervene militarily as we had those cases.

Yet, both Rwanda and Srebrenica are cases of failed intervention, not failure to intervene.

In both places, the United Nations sent peacekeeping forces where there was no peace to keep; the United Nations failed to send the number of personnel necessary, and failed to develop a strategy that could accomplish anything positive in the circumstances. Those missions offered false promises of protection that Hutus and Serbs exploited, unleashing bloodbaths. Even then, the same U.N. member states that had demanded peacekeepers failed to intervene.

No one wants to see such tragedy again. But as Secretary of Defense Robert Gates has rightly said, military intervention is complicated. People will die on all sides, civilians and combatants alike. Before resorting to force, therefore, the law of armed conflict requires assessing alternatives and the chance of success.

Germany refused to vote in favor of Resolution 1973 because the use of military force was too “unpredictable,” “risky” and “dangerous” and because other means, such as targeted sanctions, political pressure and international isolation provided alternatives to military action.

Assessing necessity should also have taken account of the moral hazard of intervention. Anti-Qaddafi forces took up arms to fight, abandoning the peaceful approach adopted in Tunisia and Egypt. Did they start a fight they knew they could not win because they gambled on U.S. intervention? Did they hear the calls for military force? And is Operation Odyssey Dawn now giving false hope to Syrians seeking change in their own country?

The Libyan opposition could have been urged to seek asylum in Egypt and Tunisia where they could have built an organization to pursue a peaceful transition of power. Military force was not the only way. The message needs to get out that the United Nations will support democracy ambitions with peaceful means.

But the United States is in Libya now. It is too late to urge the rebel leaders to seek asylum. It is finally time for clear purpose and planning—or this intervention will end even more tragically than it began. And the planning should be about ending the bloodshed, not escalating it by arming the rebels, which is not authorized by the Security Council. Resolution 1973 keeps in place the Libya-wide arms embargo that was put in place in Resolution 1970, making an exception only for the coalition to bring in their own weapons relevant to the no-fly zone and other measures to protect civilians.

Show Comments (
4
)
Comments are automatically closed two weeks after an article's initial publication. See our comments policy for more.
David Smith
9 years ago
So what were the true reasons for the US, Britain, and France to intervene, aside from the UN semi-sanction they received as a justification?  One can usually presume that politicians dissemble - or simply lie - about their goals.  We have, therefore, to discount what they say.  Why do *you* say they did it?
C Walter Mattingly
9 years ago
Mary O'Connell's point that Rwanda and Srebrenica were failed interventions rather than a failure to intervene is interesting. If she is correct, it involves in Rwanda an implicit  violation of the third international principle of a just war: does it have a good chance of succeeding? In this case, as former President Clinton rued,  the UN denied the resources required to provide that "good chance." When the fig leaf of UN forces were challenged and the UN required to make a more costly committment, the UN (and the US) folded the tent. This failure to pay the price of the minimal requirements to establish a reasonable possibility of a good outcome retroactively made the proposition of a just war in Rwanda an untenable one as the US and the UN failed to live up to the implied respsonsibility of their initial actions.
In this important sense, the invasion of Iraq comes closer to meeting the requirements of a just war. When the costs to the US of establishing a good outcome increased dramatically, no doubt enlarged by the first two years of bumbling policy, the US, for better and worse, paid the price of increasing troop levels to meet the challenge of the situation and make a "good" outcome more likely.
What is the US goal in Libya, as both Mary O'Connell and David Smith ask? One unstated goal and motivating principle, I suspect, is the president's positioning himself for 2012. As was the case in 2008, when votes trumped principle as he abandoned his pledge to accept only public campaign funds when he realized he could raise the most private money and gain political advantage, we may see a similar process at play here. He need not worry greatly about the liberal end of his party; they have no alternative. The shifting political winds that carry the centrists, the independents that he must win over, may be a dominant influence on President Obama's moves in Libya. And the president has a proven talent riding these winds.
James Bukowski
8 years 12 months ago
The military action in Libya marks an important step toward achieving a more just and secure world  - one where dictators cannot massacre their citizens with impunity and cloak themselves with the mantel of national sovereignty.

Pres. Obama rightly noted that America and our allies and the UN cannot intervene in every crisis or prevent every catastrophe.  The crisis in Libya was very unique and reflected the hopes of a new generation of Arabs.  Even the Arab League called for action against Gadaffi.  Pres. Obama and Sec. Clinton achieved a diplomatic triumph to secure passage of Resolution 1973, and then reduce US involvement to let NATO continue most military operations.

Ms. O'Connell should recognize that NATO's military action in Libya meets her three requirements: lawful objective, a last resort, a good chance of succeeding.  I praise Pres. Obama for recognizing the limits of US power, for not undertaking unilateral action, for working through our NATO allies and the United Nations, for having the patience not to escalate our commitment, and for advancing the rule of law and cause of humanity.
David Pasinski
8 years 11 months ago
The continued unverified reports of NATO commanders is, in my mind, suspect. I just don't now where any truth lies in this situation about killing civilians (which seems very sadly plausible) and then actions of the fractious "rebels" who seem to have no center and no one know for sure who they are, how they're supplied, what they stand for (We KNOW who they're against!), what would happen should they "win" (?) and - more likely-  what may happen if they "lose." This is what worries me.  Our feeble resolutions treated this whole rebellion as a game in which "sides had to be equalled" and that was impossible with overall goals and players.  Now, we've set them up for defeat and retaliation that is yet unknown. NATO- including the US the and UN resolution - botched this from the beginning. And it is the Allies who are treating the rebels as pawns in their desire to oust Qaddafi and celebrate a "democratic" beachhead in Africa - which also happens to have some oil (hmmmm....). This was a diplomatic and moral failure when other interventions would heve been possible in the light of the Libyan reality.  Very sad...
Advertisement
Advertisement

Mary Ellen O'Connell is professor of International Law and International Dispute Resolution at the Kroc Institute, University of Notre Dame.