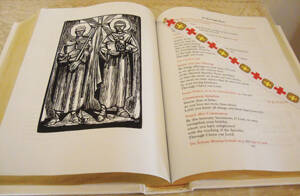 Meetings of North American liturgists last month provided a first impression of how well the upcoming introduction of the new Roman Missal is likely to proceed. Attendees at conferences of the North American Academy of Liturgy and the Catholic Academy of Liturgy in San Francisco described liturgists as frustrated with the process that led to the new missal and displeased with the quality of the translation, but resigned to its inevitability.

“I wouldn’t say people are jumping up and down about it,” the Rev. Michael Driscoll of the University of Notre Dame said. “It’s going to be a hard sell, but we’re going to be doing our part to help. The attitude is: ‘This is a translation, not the translation.’” Referring to the International Commission on English in the Liturgy and to the Vox Clara Committee, he added, “We have to be respectful of the bishops’ committee and the I.C.E.L. and the [Vox Clara Committee], but this is probably not the definitive translation.” In 15 or 20 years, said Father Driscoll, “Who knows? It’s helpful to take the long view; that’s a very Catholic thing to do.”

Bernadette Gasslein, editor of the Canadian liturgical periodical Celebrate!, said many liturgists are worried about the practical challenges to the missal’s implementation and acceptance. “Ritual behavior is always hard to change,” Gasslein said. “One would have thought that a congregation that deals with ritual behavior would have understood that.” Gasslein believes that a staggered, slower introduction of the new missal, such as the Australian church is planning, would have been a more pastoral approach. Instead, the new translation is scheduled to be used starting on the first Sunday of Advent (Nov. 27, 2011), a season in the liturgical calendar that typically draws the participation of “people who haven’t been to Mass since last Easter.”

One measure of the level of the disquiet among liturgists is a recent open letter to U.S. bishops from Anthony Ruff, O.S.B. Father Ruff has decided to withdraw from speaking engagements at eight dioceses around the United States intended to help promote the new missal. In his letter, he said that it is something he no longer can agree to “with integrity.” Father Ruff wrote, “I’m sure bishops want a speaker who can put the new missal in a positive light, and that would require me to say things I do not believe.” He submitted the letter with the permission of his Benedictine superiors.

Father Ruff, who teaches theology at St. John’s University in Collegeville, Minn., served as chairman of I.C.E.L.’s music committee. “My involvement in that process,” he wrote, “as well as my observation of the Holy See’s handling of scandal, has gradually opened my eyes to the deep problems in the structures of authority of our church.

“The forthcoming missal is but a part of a larger pattern of top-down impositions by a central authority that does not consider itself accountable to the larger church,” Father Ruff wrote. “When I think of how secretive the translation process was, how little consultation was done with priests or laity, how the Holy See allowed a small group to hijack the translation at the final stage, how unsatisfactory the final text is, how this text was imposed on national conferences of bishops in violation of their legitimate episcopal authority…and then when I think of Our Lord’s teachings on service and love and unity…I weep.” (The full text is available online.)

Father Ruff’s misgivings about the process that led to the current translation (an earlier version, approved by English-speaking bishops’ conferences, was rejected and responsibility for the new missal passed to Vox Clara) were shared by Richard R. Gaillardetz, a theologian at University of Toledo in Ohio. Noting that the documents of the Second Vatican Council require local episcopal authority over vernacular liturgy, Gaillardetz complained that in the development of the current missal, “the whole process has been reversed,” with a Vatican committee reworking a translation and then returning it to “the local church to rubber stamp.”

“The liturgy has become the instrument of choice for rolling back the full implementation of [Vatican II’s] global catholicity of the church,” said Gaillardetz. “My impression is that most dioceses are going to make a good-faith effort to implement this.... What saddens me is that what should be a source of unity is about to become instead a source of significant disunity, and it did not have to happen that way.”

On a positive note, Gasslein said, the challenge of introducing the new translation may force the church to confront “four generations of spotty liturgical catechesis” and help Catholic Mass-goers more intentionally “think about what’s happening and think about what we’re saying.” For that process to conclude successfully, however, significant follow-through will be required in an era when the percentage of weekly Mass-goers continues to decline.