A Sisters' History: The legacy of women religious in America 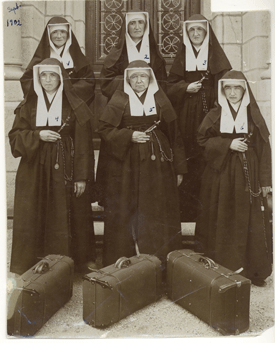 After visiting the Smithsonian Institution twice last spring, when it hosted “Women & Spirit: Catholic Sisters in America,” I was delighted to see the exhibit again in New York at the Ellis Island Immigration Museum. (Full disclosure: I served on the committee that publicized its coming to Ellis Island.) New York is the exhibition’s fifth stop on a national tour; it will move on to Dubuque, Los Angeles, South Bend and Sacramento.

In New York visitors enter the exhibit before a large screen: a five-minute video introduces several contemporary sisters who embody the passion that has fueled American women religious since they became leaders in the growth of our country almost three centuries ago. The exhibition layout, which follows a curved path where one cannot see what lies ahead, suggests the uncertainties that awaited these pioneers.

Each stop shows larger-than-life-size photos of sisters whose congregations and ministries influenced their times. On display are rare artifacts donated from some 400 religious communities, including letters from U.S. presidents and civil rights advocates. Videos reveal the sisters’ responses to natural disasters and political turmoil. Scattered audio recordings allow individual listeners an intimacy with the sisters’ successes and sufferings. Three-sided kiosks present photos and written accounts. As appropriate as it is for the Ellis Island museum to host the exhibit, the material would benefit from a larger space, like its setting at the Smithsonian. Overall, however, this effectively mounted exhibit draws visitors into a world few have ever seen—certainly not depicted in one place.

For many sisters, a visit to the site may feel like a homecoming. Ellis Island, after all, served as the port of entry for the earliest waves of European immigrants entering the United States, escaping poverty and persecution in their homelands; it also witnessed the advent of Catholic sisters. Some accompanied their families and neighbors, providing spiritual support and assistance, but many came in response to invitations from members of the clergy who had themselves emigrated from Europe and Ireland and knew from experience the dedication and effectiveness of religious sisters. Many of the sisters arrived destitute, with just the clothes on their backs and the hope that enriched their dreams. What these women gave to the poor was themselves.

Tied to Their Ministry

“Women & Spirit” chronicles how Catholic sisters helped shape the history and culture of the United States.

New Orleans was the first place to call them, in 1727. Because the sisters were far from home, they understood the loneliness and alienation of the immigrant. Their faith gave them courage to offer new Americans hope, as well as the moral and intellectual resources required for success. The stories displayed on the walls of the exhibit tell of women who assessed local needs and responded. Thousands tended homeless refugees; many died while nursing victims of cholera. During the Civil War, the sisters cared for the wounded on both sides. For this service some, like members of my order, the Sisters of Mercy, received tributes and assistance from President Lincoln. Away from the battlefield sisters built orphanages, schools, universities and hospitals. They ministered to the homebound sick and visited prisoners. They even pioneered an unofficial women’s movement decades before it became politically acceptable. By their works and words they evangelized Catholics and tended the needs of all without regard to income, education, race, gender or creed. They marched in Selma for civil rights and cried out for justice in other arenas. Some left the United States to give their service and their lives in Central and South America.

The power of “Women & Spirit” lies chiefly in its ability to transform generalities into specific stories. It is replete with examples of dedicated service to victims of poverty, oppression and exclusion. Some have tragic endings: On Sept. 8, 1900, for example, more than 6,000 men and women lost their lives in the worst hurricane in our nation’s history. When the storm threatened St. Mary’s Orphan Asylum in Galveston, Tex., the 10 sisters took their 90 children to the second floor of the rapidly flooding building. In an effort to protect them should they be cast upon the waters, the sisters used clotheslines to connect a string of children to the cinctures of their habits. All died, except three boys who lived to tell the story and sing the praises of the sisters, Emma and Rose, who perished while trying to save the children.

The Statue of Liberty announces the nation’s welcome to immigrants: “Give me your tired, your poor,/ Your huddled masses yearning to breathe free,/ The wretched refuse of your teeming shore./ Send these, the homeless tempest-tost to me.” Few who can quote this famous excerpt from “The New Colossus,” by Emma Lazarus, know that this Jewish poet-activist inspired her friend Rose Hawthorne, a convert to Catholicism, to start a religious order. An entry in the exhibit says: “After watching her friend poet Emma Lazarus die from cancer, Rose Hawthorne Lathrop (1851-1926) dedicated herself to the care of poor, terminally ill patients. She founded the Dominican Sisters, Servants for relief of incurable cancer.”

During the last part of the 19th century, cancer was believed to be contagious, and those who suffered from it were often shunned. But while Emma Lazarus was well cared for, Rose Hawthorne, the daughter of author Nathaniel Hawthorne, observed that many others were not. Ms. Hawthorne opened her home to indigent cancer victims. To support them and herself, she wrote newspaper articles highlighting her concerns and her need for financial assistance. One wealthy reader, Alice Huber, volunteered to help Ms. Hawthorne. Soon the pair gave not only their fortunes, but their lives to the effort, opening in 1899 St. Rose’s Home for Incurable Cancer. The following year they founded the religious community whose ministry was governed by three rules: the sisters were never to show revulsion for those disfigured by the disease, no money could be accepted by patients or their families, and no patient could be used as a guinea pig for medical research. Those policies remain in effect today.

Just as Rose Hawthorne responded to the signs of her times with flexibility and creativity, so did many religious congregations. And they achieved much before women had the right to vote and in a world where men were perceived as the only legitimate public leaders.

Sponsored by the History Committee of the Leadership Conference of Women Religious, the exhibit inspires visitors with the trials and triumphs of Catholic sisters, present in the United States since the French Ursulines brought Catholicism and compassion to the settlers of New Orleans.

Most of the stories tell of successes, discoveries, openness to contemporary needs and determination to be faithful to God’s call, despite counter forces that would deter or destroy them. “Women & Spirit” pays tribute to U.S. Catholic sisters and the power of the conviction that fuels their ongoing commitment in the 21st century. Recently, women religious have help-ed to rebuild New Orleans after Hur-ricane Katrina and have responded to victims of the earthquake and cholera epidemic in Haiti. Catholic sisters are still trying to embody the wisdom of St. Teresa of ávila: “Ours are the eyes through which the compassion of Christ looks out upon the world. Ours are the feet with which he goes about doing good. Ours are the hands with which he blesses all people.”

Camille D’Arienzo, R.S.M.,a member of the Mid-Atlantic Community of the Sisters of Mercy of the Americas, is a past president of the Leadership Conference of Women Religious.

Show Comments (
7
)
Comments are automatically closed two weeks after an article's initial publication. See our comments policy for more.
Julett Broadnax
10 years 1 month ago
I am curious why this Exhibit will not come to more states in the United States. I live in what is called the Southwest (though I have always thought of it as the Mid-South - Texas. I would sure like to see this exhibit shown more close to my home. Southbend, Dubuque and California are nowhere near where I live.
Patricia Galli
10 years 1 month ago

Thanks for the article Camilla.  I can hardly wait to see this when it comes to California.

I regret that this review did not appear in AMERICA a few weeks prior to the closing of the exhibition! By the time I was reminded about this inspiring and informative exhibition it was one day to closing. I missed seeing it.

Joan Carroll
10 years 1 month ago
Jan 29, 2011: I would have liked to buy a commemorative exhibit book for the Women and Spirit show, but there was none. Also, Ellis Island was a difficult place to get to with a frail elderly person. Yes, the boat is wheelchair accessible, but not everyone uses a wheelchair. Also, there was only one chair and no benches in the exhibit hall. Otherwise, it was a very interesting exhibit.
David Smith
10 years 1 month ago

Why not make a full-length video of the exhibit?  That would make it available to far more people than could see it just in DC, NY, IA, CA, and IN.  The cost could be underwritten by the old-fashioned expedient of taking up a collection.

HELEN MAHER GARVEY
10 years 1 month ago
Thank you for Camille D'Arienzos outstanding article about the exhibit, Women& Spirit: Catholic Sisters in America. We on the LCWR History Commitee appreciate the fact that many persons hoped that the exhbiit would play in their area. We tried very hard to achieve geogpraphical balance, but it was not easy. In Chicago, for instnce, after several attempts with a number of venues, we were denied.

Our budget allowed for nine venues, and it was a chalenge to use our funds wisely as we discussed the exhbit with musseum directors across the country. We are most grateful to the Hilton Fund for Sisters, the Cahoic Heath Association and many Catholic health systems for the generosity that made the exhibt possible.

For those who missed the Exhibit (or even those who did not)
LCWR is working with Design Island to produce a documentary featuring the exhibit, as well as new intrviews with sisters in various ministries. Cokie Roberts has agreed to to do the narration; John Allen, Karen Kennely, CSJ and Kathleen Cummings will provide analysis.

Agin, thank your for your support of Women & Spirit:Catholic Sisters in America.