Why Bad News Out of Africa Is Still Worth Hearing 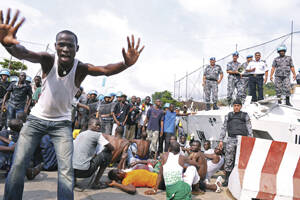 It has become hugely popular of late to trumpet the economic successes of Africa. Magazines and stockholder reports compete for catchy clichés. An article in the latest issue of Foreign Policy gushes about the “African Miracle,” while the business consultants McKinsey & Company hears the bold roar of the “African Lions.” Certainly there is forward movement to celebrate, at least relative to the continent’s dismal post-independence performance, but the reality is that the bottom 30 countries in the 2010 U.N. Human Development Index are still nearly all African (though they also include two great nation-building experiments by the United States: Afghanistan and Haiti). As for Africa’s much-vaunted entrepreneurism, of the 20 countries ranked lowest by the World Bank in terms of “ease of doing business,” 15 are in sub-Saharan Africa. On this same scale, the two highest-rated African nations are South Africa (34th) and Botswana (52nd).

What is troubling about this penchant for exaggerating Africa’s recent achievements is that it can blind us to serious ongoing problems and stifle our political and diplomatic engagement. True, it may be a refreshing alternative to decades of what used to be called “Afro-pessimism,” but one-dimensional good news is no substitute for a complete and nuanced picture of the continent.

Take, for example, Africa’s predilection for conflict. In November and December, sites in south Sudan were bombed, apparently by government forces from the north, just weeks before a referendum to be held on Jan. 9 about its independence from the rest of the country. Hostilities continue in Burundi, the Central African Republic, the Democratic Republic of Congo, Somalia and Uganda; and there are other countries that would require but a spark to reignite violence. The Center for International Develop-ment and Conflict Management concludes, “Undoubtedly, Africa remains the most serious concern.”

Democratization, too, has taken several big steps backward, in large part because of the greed and indifference of Africa’s elites. In the Ivory Coast 20 people have died so far in clashes between security forces loyal to Laurent Gbagbo, who has refused to accept his defeat in the presidential run-off elections on Nov. 28, and supporters of the apparent winner, Alassane Ouattarade. The electoral fiasco is but the latest tragedy to befall a country that 30 years ago was peaceful and prosperous, with a per capita gross domestic product vastly higher than those of Indonesia or China. Its neighbor, Guinea, played a similar game of incendiary ethnic politics this year, although so far it has avoided the worst excesses of Ivory Coast. Sudan and Ethiopia, two of Africa’s largest and most populous countries, held sham elections in 2010, further cementing their autocratic political cultures. And the continent’s other giants—the Democratic Republic of Congo, Kenya and Nigeria—remain profoundly corrupt. Of course, democracy entails far more than credible elections. Integrity in government is essential, too, which in most of Africa can be assured only through the vigilance of civil society and the media. Sadly, here too the trend is toward a tightening of political space. Human Rights Watch has noted that Ethiopia, to cite but one example, has “eviscerated civil society organizations and the independent media.” In South Africa, which has the freest press in the region, the government has proposed tough new legislation that many believe will lead to a muzzling of the media.

Doubtless, there are encouraging changes to be found in Africa—economically, politically and socially—but for too many people there life remains “nasty, brutish and short.” To deny this is not just wishful thinking; it is sinful. President Obama was praised for his courage and realism when, speaking in Ghana last year, he told his audience that “we must start from the simple premise that Africa’s future is up to Africans.” The truth, of course, is anything but simple. Africa’s future is up to all of us, and we can best shoulder that responsibility by understanding the place in all its complexity.

Chris Hennemeyer has worked with Catholic Relief Services and other nongovernmental organizations in Africa for over three decades.