The Last Roundup: The movies Hollywood wants you to see

The Last Roundup: The movies Hollywood wants you to see 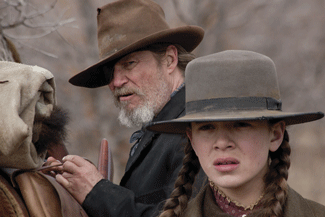 For those who did not get the metaphor they wanted for Christmas, we offer Rooster Cogburn’s eyepatch. The gunslinging hero of True Grit—the character who in 1970 won John Wayne a depressingly predictable Oscar—did not wear one in the Charles Portis novel. But Wayne did. In remaking a film that is most notable now as a symbol of Old Hollywood’s last roundup and the mortified sensibilities of a film industry being cattle-prodded into the future, the Coen brothers have preserved the one device that gave their predecessor any wit at all. The eyepatch is a symbol of half-blindness to a changing world, of willful self-deceit, of the malady that now affects the characters herding into theaters as a new year begins and the idea of the “movie” itself has begun to look as fresh and relevant as Buffalo Bill’s Wild West Show.

We watch movies to see ourselves disguised as others, made better by others, as cautionary whipping boys or aspirational models. We shy away from truth, except when it is obvious; and then we simply run the other way. What’s true about the movies is that, like the characters we love and cannot quite be, we admire one thing and are drawn to another, which is another form of the broccoli-versus-bonbons conundrum that informs most of waking life. Hollywood, which reflects the human id almost as well as Tea Party politics does, has just passed through its annual constitutional (as in digestive) crisis: It gives us movies we should like, in a minor belch of unbridled quality, in an effort to win awards, gain prestige, redeem itself and distract audiences from the fact that what it produces for the rest of the year comprises the real, money-making table d’hôte.

In this, we and Hollywood are the perfectly dysfunctional family, unable to face what makes us dysfunctional. To see the alarming truth, look at the movies being released this month. Or re-released: Most of the films of 2010, positioned for award consideration at the end of last year, have by now won or lost the critics’ prizes that signal to Oscar voters whether it is O.K. for us to like this film or that. The movies are now going into “general release.” Their ultimate fates will be decided by Oscar, that fickle nudist, because the prize can salvage even the most perilously superior film that skates along the thin ice of veracity. Several of them come dangerously close to theater-clearing candor.

“True Grit”? Not among these, despite Rooster’s retro eyewear and a touching acknowledgement that we are better creatures when we are not alone. The Coen brothers, who will never be mistaken for Magi even if the elder Mrs. Coen were to announce an imminent nativity of her own, never miss an opportunity to miss an opportunity (to steal from the Israeli diplomat Abba Eban). Their knowledge is beyond question; their cinematic fluency is occasionally breathtaking. And their inability to take themselves seriously is pathological.

Yet, among the wisecracks, wisdom. “True Grit” is about an alarmingly intelligent, self-possessed and profoundly annoying 14-year-old named Mattie Ross (played in the original by Kim Darby and here, indelibly, by Hailee Steinfeld). Her father has been gunned down and robbed; Mattie—possessed of a frontier-hardened, Old Testament outrage—means to have the perpetrator found, prosecuted and hanged.

Reuben “Rooster” Cogburn, a veteran of the Confederacy and a lawman who believes that shooting should generally precede the asking of questions, becomes Mattie’s hired gun and bête noire. As a figure in need of redemption, Jeff Bridges could not appear more distanced from it. Hidden under that eyepatch, hat, beard and a crust of what one has to assume signifies miles of malignant history, Rooster is the gimpy personification of a genuine Old West—a place and time of lawlessness, drunkenness, bad dentistry and skullduggery. What Bridges brings to the role, and Wayne never could, is a sense of corruption. Mattie, by contrast, and despite her articulate wrath, is angelic, pure of both motive and process. The heart of “True Grit,” is not the tracking down of the nefarious Tom Chaney (Josh Brolin) but the salvation of Rooster from spiritual death.

It is also about family. The principals—Rooster, Mattie and LaBoeuf (Matt Damon), the Texas Ranger they pick up along the way—are loners, by dint of their jobs or their natures. (It’s hard to imagine Mattie, say, at a sleepover.) LaBoeuf is really the outlier of the group, by virtue of having a pedestrian sense of his place in the universe. Not so the other two, whom the Coens recognize as a potentially eccentrically happy couple, unhappily born at the wrong times. The taciturn Rooster becomes downright voluble during the trio’s long trek on horseback; this recognition that even a strong, silent type sometimes needs someone to talk to is a distinct improvement over the original film.

A craving for family brings us, sideways, to Mike Leigh and Another Year. As disparate as they are as filmmakers and as irreconcilable their styles and subject matter, Leigh and the Coens are onto much the same thing this year, though Leigh to much sadder conclusions.

The English director, who spends six months to a year developing a story and script with his actors, often before a frame is shot, has always made films about the search for love. It was true of the infamous Johnny in “Naked,” of the effervescent Poppy in “Happy Go Lucky” and of Gilbert & Sullivan in “Topsy-Turvy.” And it’s true of Mary, the character played with such desperation by Lesley Manville in “Another Year.”

Mary’s problem is perception. Or lack of it. Through her job as an administrator at a London welfare office, she has made friends with a social worker named Geri (Leigh veteran Ruth Sheen) and Geri’s husband, Tom (Jim Broadbent). Tom and Geri (the joke is acknowledged and mercifully dismissed) are among the most happy of marrieds; they’re funny and quick; they have one son, who seems to have been enough. Over the course of the film they tend their “allotment,” their piece of a common garden that helps to set up the four-season structure of the movie and to signify them as nurturers.

They like Mary. They overlook the fact that she is an emotional mess, an organizational calamity who drinks too much and abuses their hospitality. But that is because they don’t see her too often, because they’re charitable people and because Mary’s importance in their lives is infinitesimal compared with what they mean to Mary. That is the tragedy at the center of the film.

It is cruel, perhaps, but you can blame Mary’s quandary on ego, an interpretation that is much easier to make about Barney Panofsky, the “hero” of Barney’s Version, the mordant comedy based on the Mordechai Richler novel and brought to the screen by director Richard J. Lewis. Barney’s life is essentially a farce in three acts, each demarcated by marriage: to Clara (Rachelle Lefevre), a red-headed libertine Barney meets in Rome, who proceeds to violate his every notion of fidelity and conformity; the so-called “second Mrs. P” (Minnie Driver), the classic stereotype of a “Jewish princess” and talk-a-holic, whose relationship with Barney begins at contempt and ends at despair; and Miriam (Rosamund Pike), the perfect woman, something even Barney has the sense to realize, falling in love with her at his own wedding (to the second Mrs. P).

But Barney is a family of one: He never makes an emotional connection to anyone outside his own tight little orbit, not even, arguably, Miriam, whom he pursues the way Napoleon pursued Moscow, albeit with more success. Ostensibly a comedy (with a wonderfully acerbic Paul Giamatti in the title role), “Barney” bears the woes of emotional myopia at its core. Barney is a sympathetic character in his wit, occasional generosity and intelligence—an intelligence that means, always, that he should have known better.

You cannot say quite the same thing about Dean and Cindy, the imploding working-class lovers of Derek Cianfrance’s eloquent and excruciating Blue Valentine, which stars the gifted Ryan Gosling and Michelle Williams as a couple who find each other with a kind of romantic clarity, but end up blinkered to themselves and each other. The film has achieved a certain pre-release notoriety for originally getting an NC-17 rating, despite featuring nothing more explicit than what’s contained in “Black Swan” (at this writing, poised as an Oscar favorite). But content is everything. One can imagine the martinets of the Motion Picture Association of America ratings board watching the awkward, even angry attempts at intimacy contained in “Blue Valentine” and recoiling from the unvarnished honesty of it all. Their duty, they asked themselves? Protecting as many people as possible from the truth.

But let’s face it. The M.P.A.A. may be America’s overstarched governess, but we welcome her discipline. Many of us take our “good” movies like medicine anyway. Now that the New Year has dawned and winter set in, we’ll be craving the comforting embrace of robots, serial killers and Harry Potter, who any day now should be getting his first mailing from A.A.R.P.

This article also appeared in print, under the headline “The Last Roundup,” in the January 3, 2011, issue.

John Anderson is a film critic for Variety and The Washington Post and a regular contributor to the Arts & Leisure section of The New York Times.