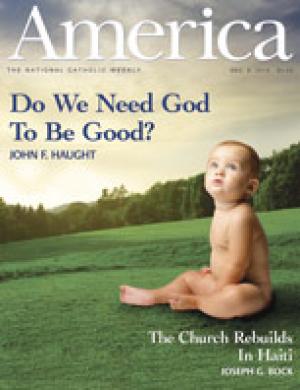 Rising From the Rubble: The unique role of Catholic N.G.O.'s in Haiti's recovery
Joseph G. BockDecember 06, 2010

The unique role of Catholic N.G.O.'s in Haiti's recovery

A Season of Giving: Readers share more stories exemplifying the true meaning of Christmas
The EditorsDecember 06, 2010

A Night to Remember

On the first Sunday of Advent, our family's 100-year-old presepio is erected in a corner of Nonna's living room. Each year two grandchildren, with awe and reverence, uncover the figures central to this event.

Can Evolution Explain Morality?: Religion, science and the desire to be good
John F. HaughtDecember 06, 2010

Religion, science and the desire to be good

In a divided church, the work of the Catholic Common Ground Initiative remains as important as ever.

God Wills It Re your editorial “Two Peoples, One State” (11/15): You do not know what you are saying and whom you are confronting. You are confronting the God of Abraham, Isaac and Jacob, who himself set the borders of Israel. In fact, Israel is the only nation on earth whose borders hav

The U.S. needs to have a strong voice in world affairs, especially on an issue as crucial as nuclear weapons.