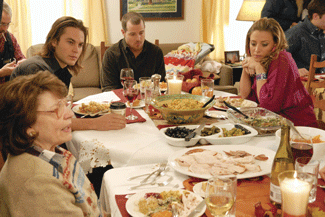 In its commitment to place, NBC’s “Friday Night Lights” is something like a William Faulkner novel. Faulkner understood from his own life, lived, as he said, on “a little postage stamp of land” in Mississippi, that one’s character is profoundly shaped by the geographical, familial, religious and social contexts in which one lives. Many of Faulkner’s novels are set in Yoknapatawpha County, modeled after a real place—Mississippi’s Lafayette County. Similarly, Friday Night Lights, now in its fifth and final season, is set in the hardscrabble, high-school-football-obsessed west Texas town of Dillon, a fictional community modeled on Odessa, Tex.

Dillon is not a transient place. People are rooted there because they either lack the means to move or cannot imagine living anywhere else. This is one reason Tim Riggins (Taylor Kitsch), the town’s football star, has made “Texas forever” his catchphrase. People are marooned there. And when everyone knows everyone else, there’s no private sin. When the car salesman Buddy Garrity (Brad Leland) cheats on his wife, everybody knows. The reverberations affect his children, his business and his social life as one of the team’s boosters.

Religion is part of life in Dillon in more than a superficial or pietistic way. Neighbors see each other at church on Sundays, pray together before football games and occasionally worry aloud that their actions, like not offering a ride to someone stranded on the highway, might be un-Christian. So as Buddy Garrity starts losing his children’s trust, it matters to the whole town. Whatever you think about the town’s values, the residents’ fierce commitments make for fascinating viewing. (Note: the show’s final season began on Oct. 27. The previous four seasons can be watched free on the show’s Web site. This season airs Wednesdays at 9 p.m. on Direct TV and will be aired again later this year on Fridays at 9 p.m. on NBC.)

No show since HBO’s crime drama “The Wire,” set in Baltimore, has tilled what T. S. Eliot called “significant soil.” “Friday Night Lights” is superb television because it gets one place just right and, by extension, much more. Most television shows, by comparison, are set in sound-stage no places, nominally called New York or L.A., if they are named at all (think “Friends”). Such places may be mildly amusing distractions from the actual locales we call home, but little is ultimately at stake, and what is at stake feels contrived. When television writers and producers tackle middle-American places, they often turn the people (who worry about money, drink beer, watch sports and raise families) into maudlin caricatures (think “Seventh Heaven” or “My Name is Earl”).

In “Friday Night Lights” the stakes are family, God and football. (The show was adapted by Peter Berg, Brian Grazer and David Nevins from a film based ona book of the same name by Buzz Bissinger.) Its creators have refused to turn their characters into clichés. Just when you think a character like the head cheerleader Lyla Garrity (Minka Kelly) is merely a superficial young woman, she grows up and surprises you.

The overarching plot focuses on the family of Eric Taylor (Kyle Chandler), the football coach, and his wife, Tami (Connie Britton), the part-time volleyball coach and school counselor turned principal, and their two daughters. The Taylors are the center of an interlocking web of characters, many of whom frequently ask Eric and Tami for help on and off the field. As many critics have noted, theirs is the best marriage on television. While most television husbands are mere punchlines, barely able to plan a night out, Eric is different. When he takes a coaching job in Austin, his family back in Dillon begins to unravel without him, and he returns.

Eric and Tami are each other’s biggest fans, always in the stands at each other’s games. And while sports is a religion in Dillon, the couple’s relationship transcends football and volleyball. When Eric is facing a difficult decision, he visits Tami’s office for advice. After they fight, they apologize. When they have a late-in-life accidental pregnancy and Tami thinks about quitting a job she loves, Eric counsels against it.

In a recent interview with National Public Radio, Connie Britton said that she and her co-star Kyle Chandler were committed to portraying a solid marriage on television. “We didn’t want this to be a marriage where we ultimately were addressing infidelity.... We really wanted to deal with the authenticity of what it is to try to make a marriage work.” Their characters are compelling because of their commitments, not in spite of them. With a lot at stake—a marriage, two kids, two jobs, an entire town counting on a win Friday night—there’s a lot to lose.

Eric and Tami are raising their daughters with care, visiting team members in the hospital and forever answering the door in the middle of the night to respond to an anxious parent or teenager. They show little vainglory, though as a result of their selfless lives, they are constantly fatigued. When the hard-partying running back Tim Riggins is caught sleeping in his truck outside their house with nowhere else to stay, Eric wordlessly throws him a sleeping bag. This understated hospitality captures something essential about small-town Texas.

“Friday Night Lights” also understands the town’s faith life. When Lyla Garrity’s life implodes, her parents divorce and she cheats on her injured boyfriend with Tim. She then gives up partying, “gets saved” and joins a Bible church. Riggins teases her, “What’d you do, join a cult or something?” But when he attends a service at her nondenominational church and the preacher says, “God loves you,” Riggins is surprised that he feels moved. “I felt something so strong that it made me wonder if everything you’ve been sayin’ isn’t as crazy as what everyone thought,” he tells Lyla. “It’s hard for me to understand that feeling. It’s kind of embarrassing. It allowed me to feel a part of something, part of the people, part of you, part of God. Even sayin’ that’s scary. Did you feel it?”

True to life, both characters stop going to church and almost immediately fall back into bed with one another. Still, viewers can sense real power in the church scenes, not unlike what the characters feel in each other’s arms or, in Riggin’s case, on the football field. The church was there when needed; the people there were mostly good.

Shot in Austin, Tex., “Friday Night Lights” boasts a lush documentary feel: a big sky, tiny churches, trailer homes, practice fields and Applebee’s restaurants speed by, as if from the seat of a passing car (or truck). And because this is both Texas and television, there are lots of good-looking people. Shot with three cameras, no rehearsals and no blocking, it allows a gifted cast to hone its craft before your eyes and, in the process, tell you something about someone’s hometown.

Show Comments (
1
)
Comments are automatically closed two weeks after an article's initial publication. See our comments policy for more.
Lois Kerschen
9 years 9 months ago
What did you think about the abortion scenario? There were positive moments for the pro-life side, and negative for the pro-abortion, but overall it gave a bad image of pro-life people, I thought.
Advertisement

This article also appeared in print, under the headline “Under a Texas Sky,” in the November 8, 2010, issue.

Anna Nussbaum Keating teaches at the Trinity School at Greenlawn in South Bend, Ind. She was born in Texas.