Sea Change: Finding old friends and a new outlook at the ocean 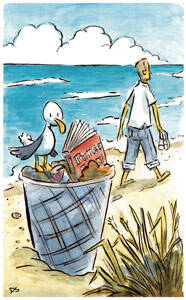 I was losing my soul on the information superhighway, so I jumped off. Weary of being confused and co-opted by too much information, too many people telling me what I should be doing and eating and thinking, I escaped to the sea. There I could empty my mind of the crush of information and opinions crowding it.

It was late afternoon on the beach in Ocean City, N.J., a pin-tucked shore retreat, neat and clean with a distinctly family feel. The sun was gaining distance as I walked along the sea line, reeling in the peaceful rhythm of the waves. Suddenly, I heard my name called. I turned and saw an old friend coming toward me—“Mad Dog,” we used to call him growing up—a smart guy but prone to fits of anger. I hadn’t seen him in maybe 20 years but had heard he hit it big on Wall Street.

As he came nearer I noticed that my old friend was bent like a parabola, perhaps from arthritis, walking slowly and struggling to keep up with his Labrador retriever. Under the impartial sun-stream, deep lines on his face, almost like scars, created a crosshatch of worry and anxiety. He was 55 years old but looked 75. We talked for a while and then, as we were about to go our separate ways, my old friend said with a palpable sadness, “You know, the sea is the only place that I feel close to God. I should have taken more time for it over the years.”

Mad Dog was right. The sea is spiritual, like saying a prayer or being in a church. The sea captures us, awes us, comforts us and calls us. It is ministerial, mysterious, magnificent. We see no signs of its age. The sea is strong, immortal, everlasting in its perfection. It connects us not only to God but also to ourselves. The sea evokes a feeling of just how temporal and fragile our lives are. It is inflexible in its disquieting teaching: that such things in life as power, glory, possessions do not really matter. In the real run-out of our lives, they will disintegrate like a sand castle under a tidal wave. Only God is certain, says the sea.

For some, the sea can foster more secular dreams. As a teenager, I would go to the sea with a girl who would build sand castles each time we were there and point to them saying, “I’m going to be a princess, and this is where I’m going to live.” She was right, in a way. She settled in a huge house at the highest point of Beverly Hills—a castle that overlooked the City of Angels. It did not bring her complete happiness, though. As she grew older, she would go to the sea and build a sand-church as near to the water as she could, then sit there and watch the water come close to it, but never cause it to disintegrate. She died with a priest at her bedside.

At the sea, in reflection and contemplation about our lives, we can peel away those parts that lead us astray. The sea encourages us to behave differently: to celebrate the passion of the soul, to not take life as seriously as the talking heads and suits make it seem, to awaken an innocence that often gets lost, or at least misplaced, when we become adults. At the sea I feel gratitude so sharp it is physical.

The next day on my walk along the shoreline I reflected on another friend, Bobby, who had moved from the city to the seaside in Wildwood, N.J., seven years ago, simply so he could be near the water, walk along the shoreline every day, embrace its perfection, soak up its eternal mysteries. “The sea keeps giving back to me,” he once told me, “and I keep taking its gifts like some cosmic outlaw. It is here that I am at the sweetest chapter in the passage of my life.” My friend is a poet.

Bobby’s return to more innocent, freeing times brought to mind these lines from T. S. Eliot: “We are the hollow men/ We are the stuffed men/ Leaning together/ Headpiece filled with straw.” Bobby was no longer permitting his adulthood to grow stuffed and stale with insignificant, unimportant things.

Sometimes I wonder where the mystery in life has gone. Do we know too much while traveling the information superhighway? Has our spiritual landscape fallen too flat, become too barren? Why do we not revel more in the talk of God and truth and purpose? Are life’s minutiae more important—indeed more indulgent—than eternal questions and answers? The willful and willing can find answers, or at least begin their search, in God’s gift: the sea.

The sea gives me a sense of who I am. It cuts out my tendency to live according to how others think I should live, and it helps me embrace the promises of God in order to find the meaning of life; it contributes to the destiny of my soul. For me, the sea is sacred. It swells, like faith, and there I hear God’s voice in the splashing of the waves. On my last day at the sea, I sat down to read a book called Future Youth. When I reached a chapter titled “Picture a New You” I tossed the book aside—in fact, I tossed it in the trash can. I did not want a new me. The present version is fine.

B. G. Kelleyhas written for America, The New York Times, Sports Illustrated and other publications. He was a writer for the television movie Final Shot: The Hank Gathers Story and is the author of a book of poetry, T