A Saint for Our Time 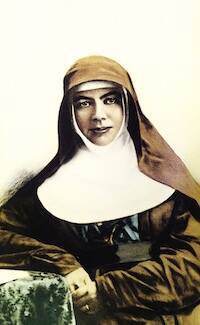 The news that a soon-to-be-saint had once been excommunicated for her order’s part in urging the church to act against an accused sex offender is a reminder of the virulence and long history of crimes of abuse by members of the Catholic clergy. The saga of Mother Mary MacKillop, who was to be canonized on Oct. 17, says much about sanctity, about sin, about women and about hope.

Mother Mary MacKillop (1848–1909), who hailed from a large Catholic family, was the co-founder of the Sisters of St. Joseph of the Sacred Heart. Her excommunication has been well documented as an almost unprecedented obstacle on the path to sainthood. After all, few saints have been excommunicated—the church’s harshest canonical penalty. But in 1870 Laurence Sheil, the bishop of Adelaide, in Australia, formally ejected her from the church. Until recently, Mother MacKillop’s punishment was thought to have been primarily a consequence of conflicts between her order (along with its co-founder, a priest) and Bishop Sheil, who cited insubordination as the reason behind his extraordinary move.

But the fuller story is that Mother Mary MacKillop was excommunicated partially out of revenge for her order’s part in pointing to a case of abuse by a Father Keating. A priest angered by Father Keating’s subsequent discipline successfully lobbied Bishop Sheil to punish Mother MacKillop and her order. Five months later, on his deathbed, the bishop reversed his decision. Paul Gardiner, S.J., the former postulator for Mother MacKillop’s canonization, said on Australian television, “Priests being annoyed that somebody had uncovered it [the abuse]—that would probably be the way of describing it—and being so angry that the destruction of the Josephites was decided on.” The Josephite Sisters have confirmed the documentary’s report as “consistent with” studies of the event.

What might this episode mean for contemporary Catholics? First, it is no surprise that a saint found herself at odds with the church hierarchy. Joan of Arc, to take an extreme example, was burned at the stake in 1431 after being convicted of heresy by an English ecclesiastical court. Thomas Aquinas found his own writings under censure in the 13th century. The most recently canonized American saint, Mother Theodore Guérin, the independent-minded founder of the Sisters of Providence of St.-Mary-of-the-Woods, was instructed in 1847 by the bishop of Vincennes, Ind., to resign from her religious order. (The bishop was later removed from his post by the Vatican.)

Second, a powerful woman in almost any organization—religious or otherwise—is frequently seen as a threat to male leadership. Despite this, women in the church managed to found religious orders, establish colleges, high schools and elementary schools, run hospitals and care for the poor. Women may be particularly adept at seeing what Pope Benedict XVI recently called “sin inside the church,” since they stand outside the power structure.

Third, whistleblowers, individually or corporately, typically face fierce opposition. Speaking the truth to power, the traditional role of the prophet, seldom garners gratitude from those to whom the truth is told. The prophet faces dismissive attitudes, hostile denials or, as in the case of Blessed Mary MacKillop and the Josephite Sisters, outright punishment. Only recently has the church begun to see whistleblowers in its own ranks as necessary—and sometimes holy.

Fourth, victims of sexual abuse may now have someone new to pray for them. Patron saints are often connected in a personal way to those who seek their intercession. Perhaps abuse victims, and all who desire justice and reconciliation in the church in the wake of the sexual abuse crisis, will see in St. Mary MacKillop a powerful intercessor. It may be providential that she walks back onto the world stage at this moment.

Fifth, her story shows how human the saints were. Often thought of as far removed from earthly realities, the saints led lives replete with every kind of joy—and suffering. The saints, however, also were men and women of “heroic virtue.” And what is more heroic than standing up for a victim when advocacy costs you membership in the church that you love?

Finally, that the hierarchical church eventually canonizes some it once reviled—Joan of Arc, Thomas Aquinas, Mother Guérin and Mary MacKillop—says much about the wisdom of the church, and its ability to recognize its own errors and amend them.

St. Mary MacKillop’s example is richer than this one episode. The redoubtable Australian co-founded a religious order, taught children, worked with the poor and in her lifetime was renowned for her holiness. Her life was full, active and holy. Like all saints, she is a model for all Catholics. But at this time, abuse victims and their families especially need all the help they can get—from heaven as on earth.

The Editors
Show Comments (
6
)
Comments are automatically closed two weeks after an article's initial publication. See our comments policy for more.
Donald Joyce
11 years 10 months ago
I am producing a permanent disply in the library of the Oblate School of Theology. This display, now over 206 icons, concentrates on "Women of the Church, yestgerday, today and tomorrow. I would like very much to find an icon of Mother Mary MacKillop to add to the permanent display. Can you help me locate the same.  Thank you for your concern.

Unfortunately the site says it is sold out, but it might be available elsewhere. I imagine there's a pretty great demand worldwide now. I thought Fr. McNichols would have done one of her, but I haven't been able to find one. I hope he does one of her.

In an article about the woman who received Mother's second miraculous intervention there's what I would call an iconic painting of Mother - don't know for sure if it is truly an icon, the article refers to a "portrait" but it's definitely in the style of iconography.
http://www.smh.com.au/national/why-me-miracle-cure-that-followed-prayers-to-mackillop-20100111-m2ry.html

Chris
JERRY VIGNA
11 years 10 months ago
Like the recent article on mountaintop removal, this one goes onto my Facebook profile  page with instruction to my students to read and comment.
Judi Farranto
11 years 10 months ago
I wonder if the Editors took account of a very different slant on this story about Mother MacKillop from another news source,

and pointed out the inaccuracies in the assertions written here, and the one who attested to their inaccuracy is the nun who advanced Mother MacKillop's sainthood case. At least, accuracy, please, Editors.