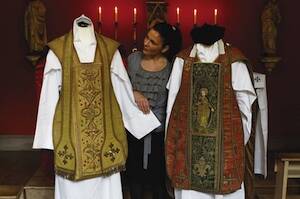 Cardinal John Henry Newman, whom Pope Benedict is to beatify on Sept. 19, is one of the Catholic Church’s most profound and prolific thinkers. Yet he was no ivory tower theologian. His masterful sermons, as well as classic treatises like The Idea of a University and the “Essay in Aid of a Grammar of Assent,” clearly display a pastoral inspiration and intent. Like that of the fathers of the church, from whom he drew intellectual and spiritual nourishment, Newman’s unitary vision permits no separation between theology, spirituality and pastoral care.

Reading Newman, one quickly becomes aware of both his many-sided genius and his rootedness in the specific context of 19th-century England. He would not be so exemplary a pastoral theologian were that not so. In addition, he is acknowledged to be one of the great stylists of the English language, skilled in many literary genres. Many enjoy the complex cadences of his writings, while others find that his Victorian rhetoric raises a barrier to appreciation.

But more impressive than Newman’s command of the language are the creative principles that animate his vision and guide his practice. Four principles can play a part in the re-centering of the Catholic imagination in a secular age—an age whose coming Newman foresaw and whose challenges he sought to meet. In keeping with his lifelong commitment to education, these may be described as four “learnings”: learning to see whole, learning Christ, learning holy living and learning to praise.

In the lectures published as The Idea of a University, Cardinal Newman makes clear that his goal is not to propose a curriculum but to promote a quality of mind. The aim of education is to cultivate a discriminating intelligence, one able to perceive relationships and discern connections. The person who possesses these traits is not a passive assimilator of data or a thoughtless purveyor of opinions. He or she strives for a comprehensive view of the real that counters reductionist approaches, whether these take the form of a narrow rationalism or a sentimental romanticism.

Thus Newman’s approach to knowledge is radically personalist. It is the whole person—head and heart, reason and imagination—who engages the real. And reality manifests itself as multidimensional: physical and spiritual, aesthetic, moral and religious. Scientific reason provides valid access within the scope of its competency; but so too do poetic imagination, moral conscience and religious faith. Pope Benedict sees in Newman a matchless proponent of that integral humanism he himself advocates in the encyclical “Caritas in Veritate.”

Tutored by Newman’s careful and expansive teaching, the contemporary believer can learn anew both reverence and gratitude: reverence before the pied beauty of reality that offers itself so generously to human experience and reflection; gratitude for the intimations it provides of mystery that both transcends and beckons.

At the heart of Newman’s religious faith and theological vision stands the person of Jesus Christ. Here human yearning finds its consummation, and “all the providences of God” cohere around this vivifying center. Thus Incarnation is the central idea or principle that grounds and sustains Christian life and imagination. Moreover, Cardinal Newman views Incarnation not merely as remedy for sin, but as fulfillment of God’s creative and sanctifying purpose. In this he consciously resembles his great Oxford predecessor Duns Scotus.

But in Newman’s thought, the idea of Incarnation is no impersonal notion. It has all the concrete particularity of its historical embodiment in Jesus Christ. In Jesus men and women encounter the Word of God in person and are called to genuine newness of life.

In Newman’s usage the terms idea and image are often interchangeable, as when he writes in the Grammar of Assent:

[Christ has] imprinted the Image or idea of Himself in the minds of His subjects individually; and that Image, apprehended and worshipped in individual minds, becomes a principle of association, and a real bond of those subjects one with another, who are thus united to the body by being united to that Image.… It is the Image of Him who fulfills the one great need of human nature, the Healer of its wounds, the Physician of the soul, this Image it is which both creates faith, and then rewards it.

This real presence of the risen Christ is implanted in believers through the church’s sacraments, especially the Eucharist. The Holy Spirit, who gathers the community in worship, does not replace Christ; the Spirit effects a new presence of Christ. As Newman says in one of his sermons: “The Holy Spirit causes, faith welcomes, the indwelling of Christ in the heart. Thus the Spirit does not take the place of Christ in the soul but secures that place to Christ.”

Indeed, the whole purpose of Newman’s splendid sermons is precisely to help his hearers to “realize” Christ: to appropriate not merely cognitively but experientially their life-giving relationship to the incarnate Word of God. The motto Newman chose when he was made a cardinal, Cor ad cor loquitur, “Heart speaks to heart,” sums up his spiritual and pastoral program. Christianity is not adherence to propositions (though they are necessary), nor is it reducible to moral dictates (though they are crucial). Christian faith is to adhere to, to dwell in him who is savior of the world and head of his body, the church. Newman thus unites the objectivity of revelation with the urgent call to realize that revelation in believers’ lives.

Newman’s understanding of revelation as centered in the person of Jesus Christ fully accords with the Second Vatican Council’s path-breaking presentation of revelation and tradition in the constitution “Dei Verbum.” He had, with keen foresight, looked forward to a new council to complete the partial labors of the recently adjourned First Vatican Council. Newman’s personalist understanding of revelation is reflected in the Second Vatican Council’s teaching, in part through the work of the young Joseph Ratzinger. Ratzinger had come to know Newman’s work as a seminarian and young professor and found in it resources to broaden and deepen a too constricted neo-scholasticism.

One post-Vatican II development, however, seems much less consonant with Newman’s conviction. Some theologians have proposed a separation between faith and beliefs, suggesting that not only is faith not exhausted by beliefs, but that the latter breed intolerance and are expendable. For Newman, Catholic faith always bears dogmatic substance: an objective content that cannot be compromised. Hence his stalwart opposition to religious and theological “liberalism” that reduces faith to private preference and sentiment. Heart does indeed speak to heart. But the heart has its reasons; it includes cognitive claims. And if we are not to fall into illusion and idolatry, we must “apprehend” the truth of him whom we confess “Lord and Messiah, the Holy One of God.”

In the final chapter of his careful study, What Happened at Vatican II, John W. O’Malley, S.J., offers an intriguing insight. He writes: “Among the recurring themes of the council expressive of its spirit, the call to holiness is particularly pervasive and particularly important.” If Father O’Malley is correct, then the success of Vatican II will ultimately depend upon whether that call is received by the whole people of God. Here too we have much to learn from Newman, especially from the sermons that make up close to one-third of his published works.

It is clear that for Newman, as for Vatican II, revelation was given not primarily for the sake of notional information, but for the sake of the real transformation of the recipient. He fully subscribed to the doctrine of the Eastern fathers that, beyond redemption from sin, the salvation won by Christ aimed at the divinization of humanity, a participation in the very life of God through Christ in the Spirit. But as the sermons cogently show, there is nothing ethereal for Newman about the implications of this doctrine for the everyday life of the Christian. His is a decidedly mundane view of divinization. His abiding concern is holiness in the everyday.

Before Thérèse of Lisieux had formulated her little way, Newman was instructing his hearers to practice self-denial “in those little things in which obedience is self-denial.” And he insisted: “Nothing is more difficult than to be disciplined and regular in our religion. It is very easy to be religious by fits and starts.” With realistic wisdom he cautions that we may “profess in general terms to wish to be changed,” yet “when particular instances of change are presented to us, we shrink from them.” As the Newman scholar Ian Ker sums up, “Newman’s sermons are distinguished not for vague platitudes and pious aspirations, but for their utter concreteness and definiteness.”

Indeed, one finds in Newman’s sermons and writings rare insight into humanity’s propensity for self-deception. In a private reflection he remarks wryly of an English bishop: “I quite believe him well-disposed to me, but justice, truth, kindness, paternity, generosity would have no chance with him, if Pope or Propaganda spoke otherwise.” Still, so as not to yield to a facile anticlericalism, it bears recalling that on other occasions Newman is quite ready to replace pope and propaganda with party and publication. He would whole-heartedly endorse Dostoyevsky’s admonition, “Above all, avoid lies, all lies, especially the lie to yourself…for active love is a harsh and fearful thing compared with love in dreams.”

Only in the graced light of authentic discernment regarding the illusory or real nature of one’s faith commitment is ongoing transformation possible. A daily examination of conscience, a reality check, is required to learn holiness. And the reality offered is not less than the grace of new life, a new self transformed in Christ. In a sermon for Pentecost Newman exults: “Christ himself vouchsafes to repeat in each of us in figure and mystery all that he did and suffered in the flesh. He is formed in us, born in us, suffers in us, rises again in us.” Christ’s grace, though freely given, is ever costly, never cheap.

Finally, the first and last word of Newman’s teaching and preaching is reserved for Christ-centered praise. His well-known hymn, “Praise to the Holiest in the Heights,” includes these stirring verses:

Which did in Adam fail,

Should strive afresh against the foe,

Should strive and should prevail;

And that a higher gift than grace

Should flesh and blood refine,

God’s Presence and His very Self,

And essence all divine.

The re-centering of the Catholic imagination could well begin with these words.

www.newmanreader.org. An extensive listing of Newman’s writings and related books.