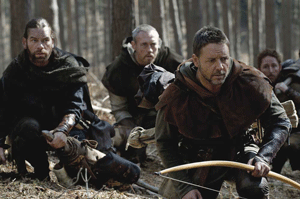 Dark, dank and exquisitely dreary, Ridley Scott’s new film “Robin Hood” is set in an England of ignorance, pestilence, filth, wholesale slaughter, creative mayhem and bad dentistry. Make that no dentistry. The Third Crusade has bankrupted the kingdom. Taxes are going up, and there’s not a tea bag in sight. There’s no question about it: Sir Ridley knows how to party like it’s 1199.

You have to give Scott some leeway even for such an enormous misfire of a movie. He approached the legend of Robin Hood—a k a Robin of Loxley, Robin of Sherwood, champion of the poor, scourge of the rich—with a devotion to medieval detail and an unvarnished vision of what 12th-century life was like, namely miserable. Of course, had he delivered the kind of gleefully heroic Technicolor fairy tale Michael Curtiz and William Keighley directed back in 1938, it wouldn’t have worked. Modern audiences want their history unembellished and their epics drenched in verisimilitude. We know that Hollywood can create, or recreate, just about anything, and we’re simply too hip for men in tights—though I watch the Errol Flynn version every time it’s on television.

But the other reason a Flynn-style “Hood” would not have clicked is that it’s been done, and done about as well as it could be. Which raises the question: Why did Scott feel compelled to make another “Robin Hood” at all? Mel Brooks turned the tale into a comedy (“Robin Hood: Men in Tights”). “Robin and Marian,” starring Sean Connery and Audrey Hepburn, was a bittersweet love story. Could Scott have become obsessed with the idea of making a version that was positively joyless? Yes, that must have been it.

Scott’s “Robin Hood” may not be any fun, but it certainly has its political instincts in the proper place and toys with both the standard Robin Hood legend and English history in order to get all the pieces just so.

Having expended 10 years and most of his country’s money on the Third Crusade, Richard the Lionheart (Danny Huston) is plundering his way back to England through France with an army that includes a lowly archer named Robin Longstride (Russell Crowe). Longstride doesn’t have many conversations with the king, but when he gets the chance he has the audacity to upbraid his monarch for the slaughter of 2,700 Muslim hostages at Acre (a historical fact).

Not sharing, apparently, the typical Anglo-Christian Crusader’s attitudes toward Islam, the progressive Robin is put in the stocks with his not-yet-Merrie Men, who remain locked up throughout the pivotal battle in which Richard receives an arrow through the throat.

Scott is not above the billboard-sized image: A broadsword, the design of which Constantine intended as a symbol of the cross that would physically and theologically defeat the heathens of Jerusalem, is seen wobbling hilt-up in the muck of France and in kingly misadventure.

The king is dead—or so it seems. There is definitely going to be a sequel, and if there is any historical fealty in the soul of this would-be movie franchise, Richard has to come back to England and replace the dubious usurper, his brother John (Oscar Isaac). But Robin and his band take the opportunity to split and head for England. En route they encounter the noble victims of an ambush led by the nefarious Godfrey (Mark Strong). Godfrey has been sent by Prince John to kill Richard, who is already dead (or so it seems). One of the dying men, Sir Robert Loxley (Douglas Hodge), entrusts his sword to Robin and asks him to take it home to his father. Robin takes the sword, the assignment and Loxley’s identity too.

Crowe plays Robin Hood as if he were suffering post-traumatic stress disorder. And apparently he is: childhood visions of his father’s death pop into his head occasionally, and only time will clear up the mystery of Robin’s interesting origins. In the meantime, being a Loxley comes with perks—a home in Nottingham shared by the real Loxley’s blind father Walter (a terrific Max von Sydow) and widow, the Lady Marian (Cate Blanchett).

Marian has spent 10 years waiting for her husband to return; the Crusade is now about as politically popular as off-shore drilling is today. She has become a sour, petulant and plow-hardened woman whose food is being stolen by the 13th-century version of a street gang. She works a farm she knows she will lose once her father-in-law is dead; she’s a woman after all. (When she puts on the chain mail and takes up the sword, it is all you can do not to laugh at the tortured correctness of it.) She is also, by the way, a pill. But hey, if you want a good time, call Olivia de Havilland. This is a serious “Robin Hood.”

One is tempted to call this film a middle-aged “Robin Hood.” Not only would it be a stretch to call Marian “Maid,” but given that 13th-century Brits could expect to live to about 35, it’s positively geriatric. In real life, Crowe and Blanchett are well into their 40s and von Sydow is 81. Granted, their characters live a slightly better life than the peasants around them (some of whose English faces look like the end result of a straight genetic line back to the Dark Ages), but they are on borrowed time. Perhaps that’s why they are so dour.

The plot involves John taking the crown and putting his trust in the untrustworthy Godfrey, who conspires with the French to attack England while that country is consumed by a civil war that doesn’t happen (not for a few hundred years). Rallying peasant and noble alike behind a proto-Magna Carta, which the historic John did indeed sign in 1215, Robin and William Marshal (William Hurt) mount a counterattack on a Channel beach in a scene that suggests a mash-up of “Saving Private Ryan” and “Braveheart.”

For all his legendary image-making (in “Alien,” “Blade Runner” and other films), Scott borrows heavily from Mel Gibson’s peculiar gift for cinematic violence, suggesting scenes not just from “Braveheart” but “The Patriot.” Lacking the wacky Gibson himself, however, and being stuck with the lugubrious Crowe, “Robin Hood” lacks the spark it might have had, even in the midst of chaos, mayhem and, again, bad teeth.

Show Comments (
2
)
Comments are automatically closed two weeks after an article's initial publication. See our comments policy for more.
David Smith
10 years 4 months ago
Sounds not worth reviewing.  Why bother?
10 years 4 months ago
Did I see the same movie as John Anderson? Robin Hood as critiqued in America [June 7-14, 2010]does take a while to “get into”; however, it took about 100pages to “get Into” Sophie’s Choice [William Styron] and Anna Karenina [Leo Tolstoy], which are now considered Classics in literature.  What I saw develop in this definitely true- to- history presentation, was a real man [Robin] who respected a woman [Marian], but not only that, a man who could love in the true sense of an agape type of love for Marian, but also, for his mutually adopted father, Walter Loxley [Max von Sydow]. Robin is shown as a moral man. There are great spiritual overtones here too, just like there were in Gladiator. Please watch these movies again. I plan on it to see what the slow beginning does to build up for this dynamic spiritual finish! To think that this is being done by Hollywood without notice!  But then again, how could they notice that which is both spiritual and moral?

As to the Muslims, that period of history [Middle Ages] was so into realism that they actually admitted [sic] who the enemy was and reacted accordingly. Unfortunately, the current situation with Islam openly fighting against all who are not Muslim is leading to all who are not Muslim being slaughtered by the Islamic believers. They are not just going after Christians. In Niccolo Capponi’s [2006] The Victory of the West: The Great Christian-Muslim Clash at the Battle of Lepanto, DaCapo Press, the same old Muslim-Christian clash goes on as in the Crusades also. Now the same clash goes on; however, it is widened by the Muslims to include all people who are not like them. Prayer is the answer.   Lord, save us!

This article also appeared in print, under the headline “Not So Merrie,” in the June 7, 2010, issue.

John Anderson is a film critic for Variety and The Washington Post and a regular contributor to The New York Times’s Arts & Leisure section.